Recapping ‘Elite’ for Round 4: Battling Stereotypes, Private School, and Murder 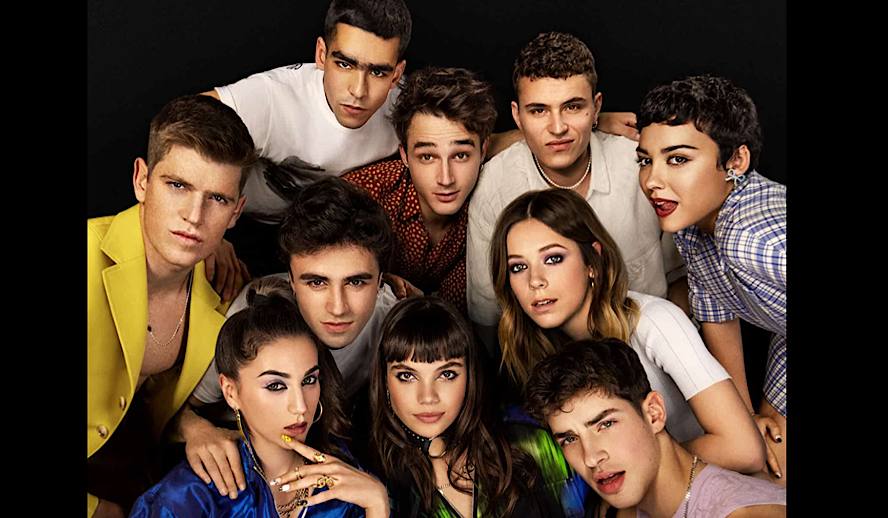 ‘Élite’ is more than a predictable teen drama; it is a murder mystery with a steamy high society twist. Set in Las Encinas, the most exclusive private school in Spain. The story is centered in a space where money means power, and fortunate teenagers have all of it. Furthermore, the lower class is completely foreign territory, and thinking about sharing a room with them is the same as walking on puke.

‘Élite’ follows the life of Samuel Garcia (Itzan Escamilla), a lower-class teenager, who by chance wins a scholarship to Las Encinas, and by the deceitful games of destiny, he finds himself trapped in the middle of a murder investigation.

The cast is primarily Spanish actors relatively new to the industry, except for Lu (Danna Paola). Danna Paola has been a famous star since she was a child, starting in children’s Novelas, and evolving into a Latin American pop star.

Gossip Girl, But Make it Spanish

At first glance, ‘Élite’ makes you believe its plot is an easy prediction. I thought, “Gossip Girl, but make it Spanish,” but I realized these characters were rooted from something deeper after the first scene. The characters in ‘Élite’ were forced to grow up extremely fast, not because of the tropes of them being “poor little rich kids,” but because the characters were placed in unusual circumstances.

Deceit, threesomes, martinis, and enormous mansions are the day-to-day for these people, and Carlos Montero and Darío Madrona found the perfect level for realistically capturing this world. Unlike ‘Gossip Girl,’ where the drama was often superficial (don’t get me wrong, I was a huge fan of ‘Gossip Girl.’ Blair Waldorf will always be a fashion icon). ‘Élite’s’ creators found just the right spot on which the character’s wealth is meant to shift their attitudes towards others of “lesser” status but not overtake their personalities—never allowing the upper-class kids to act without justifying them with deeper reasons.

In season one someone gets murdered, and when someone is wrongfully accused, the story continues into an even more exciting one. By season two, the audience is now part of the accomplices. By having witnessed the truth, the show forces you to sit at the edge of your bed, screaming for justice!

Some episodes of ‘Elite’ were directed by Silvia Quer, who undoubtedly understood the assignment—perfectly managing to create beautiful arrangements that draw you in to your screen even further. Silvia has previously worked on many Spanish shows such as ‘Gran Hotel’ and ‘Velvet’ all seasons available on Netflix.

Labels are for Clothes, Not for People

Throughout the show, a sexual fluidity was found that incredibly fought against typical stereotypes of any sexual spectrum—influencing an open-mind perspective to whoever decides to watch it.

Each character fights hard to reshape their identity, refusing to fill in a box made by others, sexually or religiously.

A representation that is often forgotten, and one that I found in this show, was the accurate portrayal of a highly religious Muslim family. But, of course, it is well known that truthful Muslim representation is something that Hollywood lacks. Carlos Montero and Darío Madrona found in their writing how to highlight the truth behind these characters—pushing out boundaries, and communicating the stereotypes and ideas with others commentary on that religion.

I’m Not Ready to Leave the World of Excess

I honestly can’t finish this review without mentioning the streak of steamy sexual tensions that continuously happen between all of those beautiful people. A few threesomes happened here and there, and more often than not, I caught myself wanting to be part of the LGBTQ+ community to have a chance with Ander (Aron Piper). After some research, I found that I was not the only one who had developed a tiny crush. Ander, if you read this, give me a call.

‘Elite’ – Ready for Round Four?

I expect more sex, drugs, extravagant jewelry, and even more mystery. It’s like a Spanish ‘Riverdale’ on steroids. If you didn’t like the other reasons to watch the show, their accent should be enough. Honestly, please do yourself a favor and do not sub it in English; it would be a huge disservice.

Netflix has already introduced the new characters and briefly talked about the relationships they will have with the main characters of the show. Sadly, half the cast from the first three seasons is not coming back, but that doesn’t worry the producers. ‘Élite’ season four was set to release on June 18th, and the news for a fifth season is already out there.

Carlos Montero and Darío Madrona’s commentary on the world’s injustice based on an elitist society makes for a seductive and entertaining show. Which means, what are you still doing here? Stream it on Netflix, you have four seasons to catch up on!