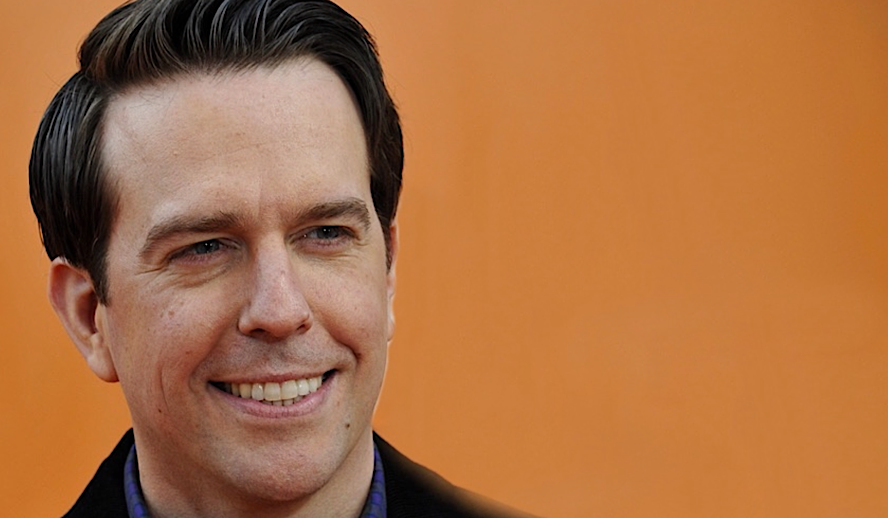 If you don’t know who Ed Helms is, you’ve been living under a rock since Y2K. Helms is a comedy tour de force. He began his career as one of Jon Stewart’s correspondents in the golden age of ‘The Daily Show’ before being cast on what I’d argue is the greatest sitcom of all time. Helms charmed and only slightly irritated us for 7 seasons as Cornell grad who’s overly proud of being a Cornell grad Andy Bernard. He also starred in hits like  ‘The Hangover,’ ‘Tag,’ and ‘We’re the Millers.’ It seems that everything Ed Helms touches turns to gold.

I know it’s unsurprising that a guy we call Ed has a full name of Edward, but if you add the “ward” to the end plus the “Parker” middle name, he sounds less like a comedic genius and more like a prep school student.

3. His parents were not the theatrical type.

Helms’ mom was a school administrator and his dad was a lawyer, an account executive, and a Navy veteran.

5. He was nicknamed “Chuck E. Cheese” in grade school.

From a young age, Helms’ suffered a severe congenital heart defect. Thankfully, he has recovered smoothly since.

7. He went to the same grade school as another Dunder Mifflin coworker.

Helms attended The Westminster Schools and graduated just a year after Brian Baumgartner who played Kevin on ‘The Office.’

8. He would make a mean one-man band.

Helms plays the banjo, the piano, and the harmonica. It seems every cast member on ‘The Office’ had musical talent as Creed Bratton, who played Creed, was in a rock band in the 70s and Rainn Wilson, who played Dwight, could play the bassoon, the recorder, and the guitar.

Helms began his time at Oberlin College studying geology before switching to film studies and technology after his sophomore year.

10. Much like future ‘Office’ co-star Steve Carell, his big break came when he was cast as a correspondent on ‘The Daily Show.’

11. He had some killer coworkers on ‘The Daily Show.’

It must be intimidating enough to walk into your first day of work with living legend Jon Stewart as your boss. It gets even more daunting when you realize some of your coworkers will include Stephen Colbert, John Oliver, and Samantha Bee, all of whom were correspondents at some point during Helms’ tenure on the show. Helms rose to the challenge and became one of the most memorable correspondents in ‘Daily Show’ history.

Andy was supposed to leave Dunder-Mifflin Scranton like every other employee from the Stamford branch. But everyone on the show loved the character and loved Helms so much, he was added to the regular cast.

13. One of his scene partners in ‘Dinner Party’ was VERY pregnant while the episode was being filmed.

Angela Kinsey, who played Angela on ‘The Office,’ explains on the ‘Office Ladies’ podcast that she was very close to delivering a baby when she was on set for ‘Dinner Party.’ One of her favorite moments in filming the entire series was when her baby started kicking like mad while they were filming the scene at the dinner table. Making sure that someone else knew what she was going through, she grabbed Ed Helms’ hand and put it on her belly so he could feel the kicking. He mouthed to her “oh my god.”

14. ‘Dinner Party’ was one of the hardest episodes for the actors involved to get through without breaking on camera.

The ‘Dinner Party’ episode of ‘The Office’ happens when Michael invites Jim, Pam, Andy, and Angela (and Dwight and his former babysitter crash the party) over to his and Jan’s condo for a couples-only dinner party. What ensues makes up one of the cringiest and also one of the funniest episodes in the entire series. The actors who played the characters who attended the dinner party said on an episode of the ‘Office Ladies’ podcast that everyone had a hard time getting through that episode because it was so hard to keep a straight face while filming. Just imagine having to keep your cool while walking into Jan’s infamous candle-filled workspace.

15. He also sang in an Acappella group in college.

Much like Andy Bernard, Helms joined his college’s Acappella group. Helms is a proud alum of the Oberlin College Obertones.

16. But he quit the Obertones after one semester.

Unlike Andy whose motto seems to be “once a Treble, always a Treble.”

17. Andy Bernard has a ridiculous amount of nicknames.

If you want to see the full list, check out the aliases section of the character’s page on Dunderpedia. Of course, we all know Nard Dog but some of the best of his other aliases include Boner Champ, Drew, and Puke. Although, as a diehard ‘Office’ fan, it would be remiss of me not to point out that Dunderpedia lists Nard Man as one of his aliases and, to quote Andy himself, “Nard Man is my father.”

‘The Office’ is a show that’s known for letting actors become more involved with the show than just acting as a character on set. In this tradition, Ed Helms directed the episodes ‘Welcome Party’ and ‘Christmas Wishes.’

19. Andy says one of the most meaningful quotes in the entirety in ‘The Office.’

Every ‘Office fan had tears running down their face when we said goodbye to Dunder Mifflin for the last time in the finale. The tears doubled when Andy said one of the most meaningful lines in the entire series. When reflecting on his time at Dunder-Mifflin, he says, “I wish there was a way to know you’re in the good old days before you’ve actually left them.” I’m not crying, you’re crying!

20. Helms has a missing tooth.

This was useful when Helms starred in ‘The Hangover’ because his character Stu loses a tooth. He usually uses an implant to cover the hole but it wasn’t necessary for the movie.

21. The three best friends that anybody could have!

Helms, Zach Galifinakis, and Bradley Cooper were all friends before they started filming ‘The Hangover.’ Helms credits this for allowing them to have such great chemistry on screen.

22. He and Zach Galifinakis improvised their songs in the ‘Hangover’ series.

‘Stu’s Song’ and ‘Three Best Friends’ were both made up on the spot.

23. He got food poisoning while filming ‘The Hangover Part 2.”

This was from eating street food while filming in Bangkok.

24. He starred in an episode of ‘Drunk History.’

He played William McMasters in the ‘Scoundrels’ episode.

25. In 2014, he delivered the commencement speech at his fake alma mater.

If you know anything about Andy Bernard, you know that he attended Cornell University. I’m pretty sure there’s not a single conversation Andy has in the entire series in which he doesn’t bring up the fact that he went to Cornell. Helms is not in real life a Cornell graduate but in 2014, he was invited to deliver the commencement speech at Cornell. I genuinely hope he ended that speech with “I can so just sit here and cry right now!”

26. He was in a reboot of ‘National Lampoons: Vacation.’

Helms starred as Rusty Griswold in the reboot of the comedy classic.

27. If he’s at a bar that frat boys happen to populate as well, he’s getting free drinks.

No movie is a better tribute to brotherhood and binge drinking than ‘The Hangover.’ This is why Helms has confirmed that frat boys tend to buy him drinks at bars.

You can hear Helms’ voice in commercials for Burger King, CDnow.com, and Lycos.

29. He likes to keep his personal life private.

Given the huge celebrity that he is, it must be difficult, but Helms does his best to keep his family out of the spotlight.

30. He has a recurring role on ‘BoJack Horseman.’

In an incredibly bizarre and therefore typical sketch in the sketch show ‘Aunty Donna’s Big Ol’ House of Fun,’ the show introduces Ed Helms who spends his time on the show insisting everyone gets his name wrong and it’s really Egg Helms. Was it just a bit or have we all been pronouncing his name wrong this whole time.

32. He has a new sitcom on Amazon Prime.

‘Rutherford Falls’ premiers on Amazon Prime in late April. It is yet another team-up of people who worked on ‘The Office’ as Michael Shur, who wrote on the show and played Dwight’s cousin Mose, is the executive producer and Ed Helms plays the protagonist. It’s about the descendant of Rutherford Falls’ founder trying to move a historical statue.