‘Encanto’: A Beautiful Commemoration For The People Of Colombia 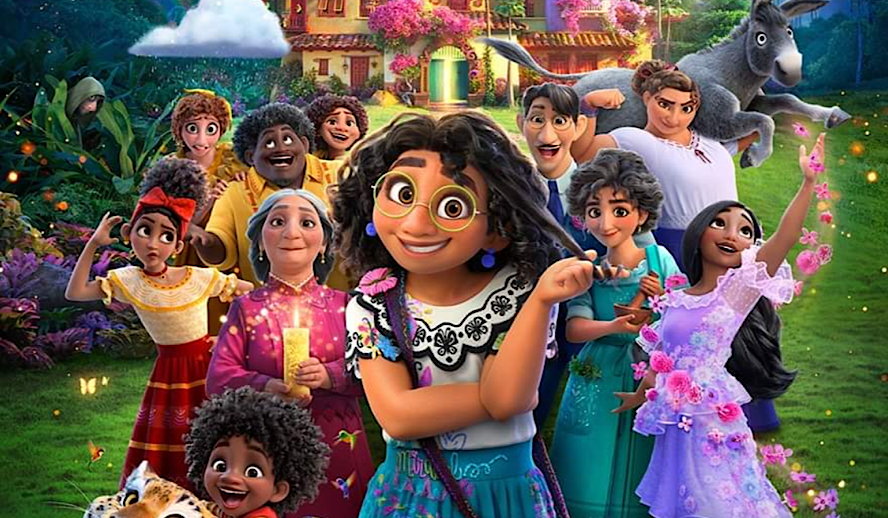 Studios have quickly realized that the public craves more stories with real diversity and rich cultural backgrounds, especially after the success of Pixar’s film ‘Coco.’ A movie inspired by Mexican traditions and its famous holiday Day Of The Dead. The film became critically acclaimed, winning two Academy Awards, proving to executives that there was much more to offer from the Latin American culture. It is exciting to see the time has come for diversity to take on the reins and create a new representational narrative for the younger generations. Of course, Disney was not going to stay behind. As ‘Encanto’ is Disney’s latest animated film featuring the beautiful people of Colombia, its creators did not fail to meet expectations.

In a small village between the luscious mountain ranges and green valleys of Colombia live the Madrigal family. The Madrigals are unique because each member receives a magical gift that will strengthen the family when they reach a certain age. But when Maribel Madrigal is the only one in her family that fails to obtain her magical powers, the family realizes there might be a lot of trouble coming their way.

A Journey Through Accurate Diversity

As Disney’s first feature-length animated musical set in Latin America, creators seemed to have understood their assignment. The film’s accuracy at Colombian traditions is an essential asset, as it drives representation towards a great route.‘Encanto’ is a beautiful film that discovers the magic of the Colombian culture, adding a pinch of family trouble and joyful tunes to its storyline. ‘Encanto’ is a delightful animation that takes us on a journey. Not only of the Madrigal family and their broken house, but through the diversity found in nature, music, food, and the variety of skin colors found in the South American country.

They Got It, Just About Right

‘Encanto’ is astonishingly well-suited, considering most of the creators, except for Charise Castro Smith, who is of Cuban descent, are not of Latin nature. Discovering how ‘Encanto’ creators accomplished to deliver the magic and beauty of a country that is not theirs without stereotypes is something to admire. The tendency to get the stereotypes riding on high horses and then call it representation is always there, especially regarding the country of Colombia (*cough* *cough* ‘Mr. & Mrs. Smith,’ ‘Narcos,’ okay, the list goes on). But with ‘Encanto,’ they really got it, just about right.

There’s some value in finding out the creator’s perspective and their way of using the culture to create a beautiful story. Maribel sets for the perfect lead as she introduces us to a world we want to see more of from the start. We find ourselves walking through a town lost in time, a living house, and an enormous family with headstrong personalities packed with various magical gifts. That makes for a perfect movie night.

Although ‘Encanto’ is not as Colombian-led as we hoped to see behind the scenes, the cast includes a few Colombian personalities such as Angie Cepeda, María Cecilia Botero, Carolina Gaitan, Mauro Castillo, and the reggaeton superstar Maluma as part of the cast of the artists involved. Maluma’s first collaboration as a voice actor left nothing but great things to say, as his voice wasn’t as recognizable (in a good way). Maluma plays the town’s lovable heart-throb who has “too much love inside.” Adding to the cast, we find, more known to the American public, Latin legends like John Leguizamo, Wilmer Valderrama, and Stephanie Beatriz as the leads. It is no surprise these artists delivered to their full potential, as they often do.

‘Encanto’ – Many Children Will Feel Identified

The images chosen are still vivid in my memories as every frame is done with extreme care and awe-inspiring detail. The experience was as magical as you would hope it to be. The movie theater’s lights dimmed down, and the ‘Encanto’ title popped off the screen. When Maribel’s opening song introduced her family members, I realized that (for the first time) I had found a character that looked just like me. I could not help but hear my inner child cry with happiness. It took decades for this to happen, but I could not believe I had finally seen myself in a Disney film. The variety of emotions felt throughout are indescribable, just because the creators surprisingly understood Colombian’s background from the very core.

Lin Manuel Miranda Did It Again, I Cried At The End

From the music to the small details of the food they were eating, creators took the opportunity and actually immersed themselves with what they learned about the culture. The songs were a combination of Salsa and Vallenato mixed with a pinch of ‘Hamilton.’ Lin Manuel Miranda has done it again and has accomplished creating amazing catchy tunes that leave you walking out of the theater singing a few verses of songs you just heard once.

The musical offers the perfect number of musical pieces without dragging its premise for too long. Lin Manuel Miranda found the ideal mixture of Colombian instruments and genres to represent different parts of the region, delivering a robust set of songs amongst the exuberant mountains. Now that we’ve been talking about gifts, let’s point out how crazy it is to think that Lin Manuel Miranda has actual magical power. When it comes to making you feel something extraordinary and be teary-eyed simultaneously is something only Miranda can do, every time he touches a project.

Carlos Vives, One Of The Kings of Vallenato

I thought I heard a familiar voice for the final theme song played in ‘Encanto.’ Which took me to find a lot of information about the creation of the project, but I was ecstatic to find I was right. The beautiful track is sung by no other than Vallenato and award-winning musician Carlos Vives. Having Vives be part of the film adds to ‘Encanto’s’ uniqueness, as attaching a legendary artist for Colombians as Carlos Vives is, adds to the film’s authenticity. I am totally downloading this song on Spotify!

Besides its gleeful music scores, what makes ‘Encanto’ so great is the approach to its characters. Writers found the importance of portraying the grandma as the foundation of the family woman, accurately capturing the strength behind Colombian women. Each character’s personality reminded me of someone I know, as the creators found a hilarious way to juxtaposition the different but strong-willed personalities of all the members of the Madrigal family. Family is a central theme in this one, and the notion of pretending everything is okay. I loved to watch how ‘Encanto’s’ creators have taken negative parts of the culture, encountered the positive, and added heartwarming moments to it.

Disney did not forget to find the comedy behind this story, as the comedic timing was impeccable. Fate, miracles, magic, this is everything you’ll find when watching ‘Encanto’ plus add a knot in your throat, and a few chills here and there, and no, this is not from being sick, but from the beautiful relationships and the healing that happens between the members of the Madrigal family.

I often questioned why, if the film had many opportunities to be corny, it never was. But I found that the heartfelt moments are rooted in family and real sentiments between the characters’ relationships and personalities, making the delivery of the lines honest and believable.

‘Encanto’ is everything you expect from a Disney film plus more. It is a beautiful commemoration for the people of Colombia, one that has been long overdue. Thanks to this beautiful creation, Pablo Escobar won’t be the only thing representing the country anymore, but its music, magic, and ‘Encanto’ will. If you want to fully experience the magic while walking around town with a toucan on your shoulder, watch ‘Encanto’ because it is a truly mesmerizing experience!

Watch ‘Encanto’ in theaters or Stream on DisneyPlus on December 24th!