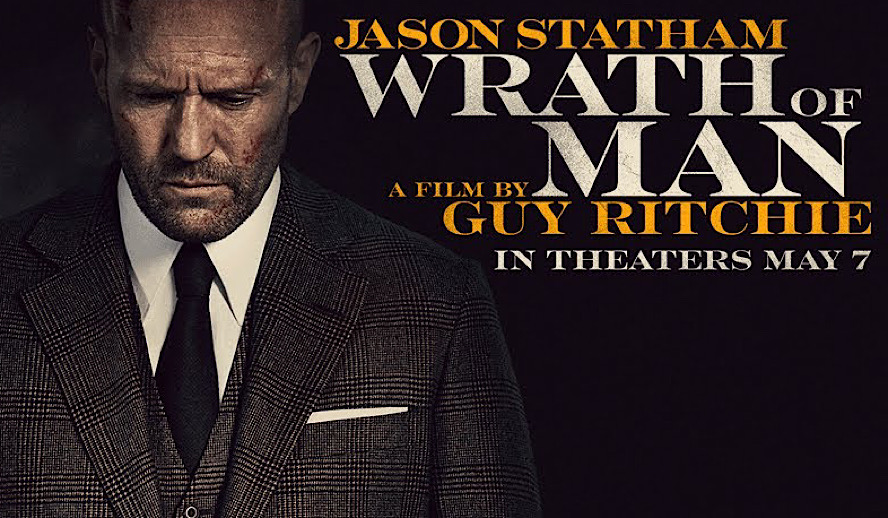 ‘Wrath of Man’ is the newest Guy Ritchie production, the writer and director responsible for ‘The Gentlemen’, ‘Snatch’, and the 2009 iteration of ‘Sherlock Holmes.’ ‘Wrath of Man’ is a bit of a divergence from the structural blueprint outlined throughout Ritchie’s career. He had found success through the witty banter and interesting concepts of his early films but decided to forgo that approach with this most recent release. This new production follows Jason Statham’s H, a man signing on to work for an armored truck service that’s been the victim of a string of robberies, incidents which fortuitously claimed the life of his son. Statham, the boss of a powerful gang, decides to take the culprits head-on in this classic revenge story, as he seeks retribution against the thugs by any means.

Related article: Guns, Muscles, and Kung Fu – The 1980s and the Birth of the “Action Movie” and “Action Hero”

2021’s ‘Wrath of Man’ struggles out of the gates to identify its tone. The early portions of the film are characterized by their out-of-place quippy dialogue amid some truly bleak and dark imagery. This contrast makes it very hard for the viewer to understand the tone of the overall piece, jumping from trite humor to intense violence and murder. This isn’t necessarily a bad thing, films like ‘Deadpool’ pull this technique off quite well, but the execution here is far from perfect. ‘Wrath of Man’ jumps about its timeline irreverently, hopping forward and backward in time enough for it to become disorientingly complicated. However, the film puts together a banner final act, an intense and well-choreographed 30-minute long heist that will absolutely have you on the edge of your seat.

‘Wrath of Man’ focuses on Statham as he battles a team of brutish Army vets who begin robbing armored trucks after struggling to find steady work once returning to civilian life. An interesting concept which ultimately goes unconsidered, the struggle of the vets is brushed over for a more traditional concept amidst some bizarre implementation. The film is your every-day revenge story, never bringing anything innovative to the genre. It attempts to have some Nolan-esque time skips, but they come so often that it disorients and often struggles to find any real reason for the time travel.

As Statham begins working for the armored truck company he single-handedly prevents a robbery on what seems to be his first day on the job, executing all six of the criminals instantly. We then get some context to the relationships between Statham’s co-workers, then experience our first skip in time. We jump forwards and back, giving context to both the incident that had Statham’s son killed, retrospectively, while also building up Statham’s escapades at work, currently. Only now, halfway through the film are we introduced to our team of bad guys. We then bounce forwards and back in time again to gain the context necessary to understand their motivations and upcoming plans (not a very streamlined approach). Thankfully, after we learned everything Ritchie decided we needed to, we are presented with one of the best action sequences in recent time. The film concludes rather satisfyingly, with Statham essentially riding off into the sunset.

A quick Google search for “‘Wrath of Man’ reviews” turns up a number of differing opinions ranging from admiration and reverence to pure admonition. The very first google result, “The Abysmal Wrath of Man Proves Guy Ritchie Is His Own Worst Enemy” reads the headline from a Vulture article penned by Bilge Ebiri. The next headline down, written by K. Austin Collins for Rolling Stone states, “‘Wrath of Man’ Is the Action-Heist-Revenge Flick You Want Right Now.” There is a clear disconnect between writers and film “professionals” as to the quality of the film, as a whole. Which of these opinions is the correct opinion? Is ‘Wrath of Man’ “abysmal” or is it exactly what we “…want right now?”

The truth lies somewhere in the middle of these two opinions. The film is structurally abysmal and does have some serious dialogue issues, but, there are some redeeming fights that even the savviest action movie junkies will appreciate. “Wrath of Man” is a mediocre film, falling right in line with the majority of Guy Ritchie’s filmography. The film has an average rating of 3.3 out of 5 possible stars on Letterboxd, a rather middling score and 71% of all reviews of the film are between 3-4 stars. This is a clear demonstration that the film is decidedly average. ‘Wrath of Man’ is not a groundbreaking film but it is also not the scourge of society, by any means, and the audience is accurately representing that with its reception.

James Herbert, the editor responsible for ‘Wrath of Man’ did a fantastic job. There are some rhythmic editing sequences that are so seamless they are almost unnoticeable but add a tremendous flare to the picture, as a whole. Herbert is also responsible for ‘Edge of Tomorrow” and ‘Sherlock Holmes’ (2009), films that also featured smooth and snappy edits. It’s safe to say that James Herbert has not lost his edge in the years following those successes and, quite possibly, may have put forth his best effort to date.

‘Wrath of Man’ is also bolstered by a really strong score, reminiscent of ‘The Joker’ musical accompaniment, and great sound design. Composer Christopher Benstead and sound designer Jimmy Boyle worked with a small sound team to create the powerful and droning score. The sound pairs very well with the editing, creating an overall atmosphere, an attribute that the writing disregards mightily.

‘Wrath of Man’ is a satisfactory action-thriller-shooter that does just enough to avoid the dark recesses of the bargain bin that so often claims Jason Statham action flicks. This film comes in a time where good movies are rather sparse, and because of that, this will have a moment in the limelight, even if it is rather brief. ‘Wrath of Man’ is a decent film but will likely be forgotten with time, a sad truth that befits the vast majority of films that are just good enough to avoid infamy but not good enough to claim a lasting following. If you’re looking for something to do on an evening with friends, seeing ‘Wrath of Man’ at your local theater is a great option.