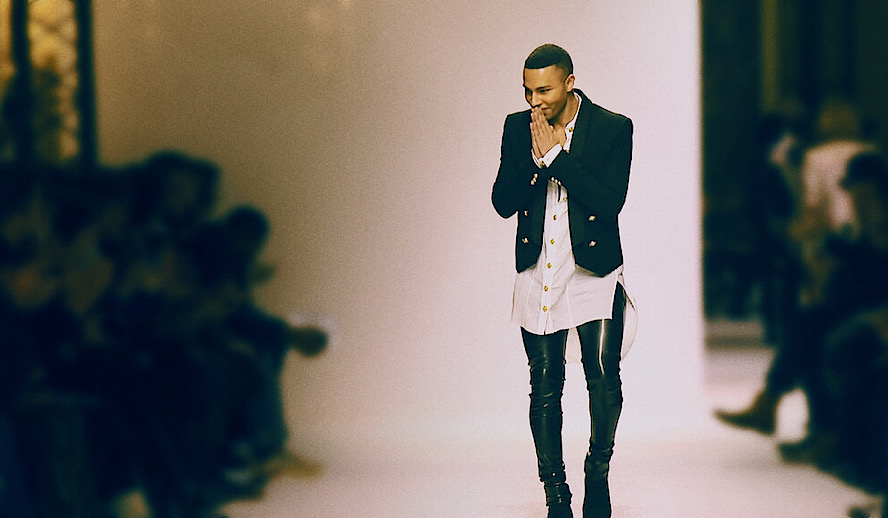 In 2011, 24-year-old Olivier Rousteing was announced as Balmain’s new creative director, marking the youngest creator to helm a luxury fashion brand since Yves Saint Laurent himself. Since then, he’s improved the company’s earnings sixfold, proving his place as a growing leader in the fashion industry. But behind the scenes, Rousteing dealt with his own, inexplicable problem he could not solve – where he came from, as an adopted individual given up at birth. ‘Wonder Boy,’ the newest documentary from Netflix and Studio Canal, explores his search for the unknown.

Olivier Rousteing – A Longing for Truth

Though ‘Wonder Boy’ is populated with the glitz, glamour, and promise of the Paris fashion scene, at its heart is an extremely personal search for the self. In the film, a now 32-year-old Rousteing decides to finally embark on a formal search for his birth mother, who gave him up for adoption when he was born. He has almost no concrete acts to go on and no reasoning for why he was surrendered in the first place – and we learn that this has caused him to have deep insecurity his whole life, despite his unparalleled career success. As he says in the film in an introspective moment, “the more I know where I’m going, the more I need to know where I’m from.”

This quest for his birth parents, however, is not due to a lack of love in his upbringing. In fact, Rousteing is quite close to his parents and grandparents, who comprise a supportive, tight-knit unit. However, there’s always been a longing for the truth, a disconnect with Rousteing’s place in the family. In ‘Wonder Boy,’ he surmises how he always wondered what his parents simply looked like, as a young PoC growing up in a white family. Furthermore, he admits that the love he has received from his family still never covers up the deep sense of abandonment he felt from being an orphan in the first place. This insecurity has permeated every part of his life, causing him to feel unsatisfied with nearly every pursuit, even if he’s extremely successful on the surface.

Without giving away spoilers, this journey is extremely emotional in ‘Wonder Boy,’ with the filmmakers doing a phenomenal job with following Rousteing in his soul searching. The documentary also gives some great educational insight into the process of reconnecting with a birth parent – what that entails legally and administratively.

The External World vs Internal

Going off of that, ‘Wonder Boy’ is uniquely characterized by two different worlds – the external and the internal. In the external, we see Olivier work as a high-functioning creative who is always “on”. At Balmain, he conducts his work with ease, having a sort of the third eye for visual design. He weaves in and out of his team of trusted collaborators, always making sure that each piece representing the label is absolutely perfect. At his fashion shows, he is gracious and warm, sociable and well-regarded. He’s a confident leader – an icon in the industry with a purpose and a vision.

But when he’s alone with his own thoughts, we start to see Rousteing’s insecurities grow. In a particularly sensitive scene in the documentary, he admits that his confidence and projection is not all that. He finds fulfillment in his work at Balmain, but sometimes wonders what his true purpose is. Of course, this all stems from the search for his birth mother, but it seems to permeate in other ways as well. For example, Rousteing realizes that he is alone in his world – with no one to come back to when he gets home at night. He realizes that he has no work/home balance – with no relaxing hobbies or time to dedicate to any.  He realizes that – though he seems stable on the surface, in control of everything – he feels lost.

This duality is reflected in the film’s style as well, which flits back and forth between the two worlds in an almost jarring fashion. It feels visceral – like you are being put in Rousteing’s shoes and forced to experience what he feels when the rush of the fashion world subsides, when you are left to your own devices and your own worries. And all in all, exploring this struggle through the lens of someone so incredibly successful gives the documentary such an intriguing pull. This loneliness is something we all likely grapple with – and it feels oddly comforting to see it depicted on the screen.

An Artistic Foray into the World of Fashion

But don’t forget – the documentary also takes place in the coveted world of Paris fashion, an elite world always fun to explore. In ‘Wonder Boy,’ we are introduced to Rousteing’s brand, Balmain, which is characterized by its bold colors and sophisticated style. We get to sit on fashion shows, fittings, and design meetings, seeing how a fashion line all comes together from start to finish. And, we get to listen in on some interesting insight on Rousteing himself, who of course is one of the biggest names in the game. In one scene, for example, he discusses how his brand is known for its diversity, which he doesn’t understand. In his eyes, diversity should be the norm, and other brands should be chastised for their lack of it.

This world of artistry and flair is complemented well by the film’s style, which feels a tad unconventional in its editing and visual style. At times, it feels more like an art film than a documentary, relying on visual senses and emotions rather than pure dialogue and “telling the viewer what’s happening.” However, this works extremely well for this particular subject matter, and it’s hard to think of how this story would be received if it was told in a more conventional, educational way.

All in all, ‘Wonder Boy’ is a great documentary that all would enjoy, benefitting from its attractive place in a glamorous world juxtaposed by its very human struggle at the center. Even for those who don’t usually watch documentaries – this one is incredibly easy to become immersed in, easy to follow, and consume.

If you’re looking to watch the film, ‘Wonder Boy’ is now streaming on Netflix.