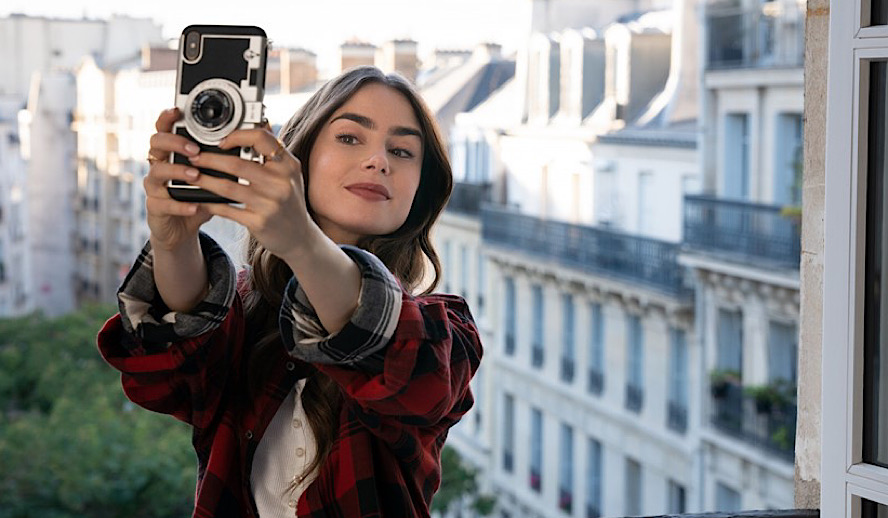 When streaming and binge-watching has become the norm, Netflix’s new romantic comedy/drama ‘Emily in Paris‘ fits right into the cultural moment. This new release follows a millennial woman named Emily as she takes on a job at a Parisian marketing firm. A bubbly American girl, who can at times be a lot to handle, making her way in a city where she doesn’t even know the language, Emily embarks on a fun, romantic, and fashionable adventure in Paris while also confronting cultural obstacles along her way.

The show’s first season premiered on October 2nd and consists of 10 episodes all roughly 30 minutes in length. This length makes it absolutely perfect for binge-watching, and after doing just that, here is my review of Emily in Paris.

‘The Devil Wears Prada’ meets ‘Sex and the City’

It is hardly a surprise that Emily in Paris pays homage to Sex and the City as Darren Star created both. He brilliantly melds two interesting storylines while also providing the modern twist of making the main character, Emily, an influencer. Incorporating modern ideas, cultural movements, and social media allows the show to appeal to a younger audience while also maintaining classic story structures.

Seeing fan-favorite classics influencing new shows is always fun and as someone who lists The Devil Wears Prada amid my top 5 movies, I was very excited about the fashion aspect of this show. While Emily in Paris does not quite focus intensely on the cut-throat fashion environment of Paris, there is a heavy emphasis on fashion within the subject matter of the show as well as in the costumes. The setting of Paris contributes to the integration of fashion within the show and provides the perfect backdrop for Emily’s experience.

‘Emily in Paris’ is Full of Picturesque Views, Glamorous Parties, and Splendid Outfits

The show takes place in Paris, which of course offers stunning locations. They were able to film at real châteaus, cafés, and museums, giving viewers a virtual tour of Paris. Especially in a time when the general population is encouraged to stay at home and avoid traveling, seeing these amazing sites and experiencing the culture second-hand through a television screen is a great way to still see the world.

A show about a young woman working at an agency that represents designers would simply not be complete without lavish outfits. As Emily, Lily Collins wears bright colors and prints, simultaneously allowing her to fit into the fashion-forward people of Paris while also setting her apart from their more sophisticated and careless style. Her clothes reflect her personality: trendy, upbeat, and energetic. Patricia Field, who helped create the aesthetics of Sex and the City, did the costumes for Emily in Paris. Ashley Park, who played Emily’s best friend Mindy in the show, told Town & Country, “I think Patricia did such a great job of finding the voice of each of these characters, and making the fashion as bold and unique as possible.”

An, at Times Obnoxious, American in Paris

I thoroughly enjoy shows in which the main character is not a completely lovable character. While Lily Collins definitely adds a bubbly charm to the role of Emily, viewers cannot help but see her naivete and, at times, obnoxious behavior toward French culture. Any American who has traveled in Paris without speaking French will know how difficult it is to get around and how dismissive the French can be when an American shows up. While this idea can be distilled down into the stereotype of sophisticated snobbishness on the part of the French people—as is done in Emily in Paris—we see that it is folly for Emily to simply parade around in a city without any knowledge of the culture and language. Since the show is primarily a comedic drama, there is not much in the form of meaningful character development, although we do see Emily begin to make an effort to find common ground with her French colleagues.

Related article: Hollywood Insider’s CEO Pritan Ambroase: “The Importance of Venice Film Festival as the Protector of Cinema” – Cinema Will Live On

Emily seems to me, a mix between a bumbling outsider whom audiences are supposed to laugh at as well as an example of a common woman whom audiences can identify with. Even in life, we laugh at ourselves when we make an embarrassing mistake, why can’t characters in a TV show do the same.

Overall, this TV show was really just a feel-good, fun watch. I binged it with a friend of mine over Zoom, which made it even more enjoyable as we could laugh together, feel the sting of second-hand embarrassment, and have a running hilarious commentary about what we thought about each character. While a second season has not been confirmed, I am truly hoping that Netflix decides to continue this show.

The first season of Emily in Paris is currently available to watch on Netflix.