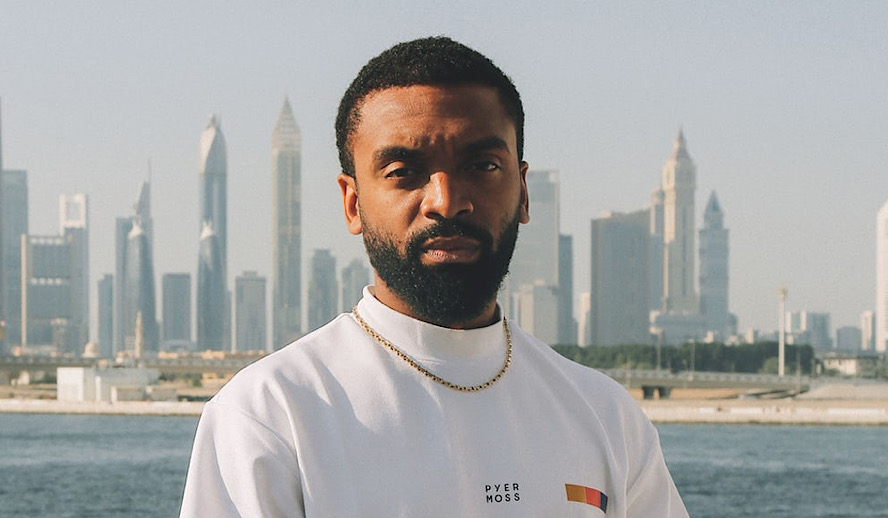 Remember the name Kerby Jean-Raymond, a Haitian-American fashion designer who’s rapidly becoming a household name. Best known for Pyer Moss, a clothing brand that mixes heritage and activism, Jean-Raymond rose to fame during 2016’s New York Fashion Week. It was the first year his brand was featured and he created a show that highlighted police brutality and the Black Lives Matter movement. By combining different mediums to tell this narrative, Pyer Moss instantly drew attention to itself.

Related article: Karl Lagerfeld Memorial To Be Held On June 20, 2019 | FACT-CHECKED Series: 12 Facts About The Eccentric And Enigmatic Creator

Since 2013, Pyer Moss and Jean-Raymond have continuously brought light to Black pain but also have told stories of Black joy. No matter what, Jean-Raymond is loyal to the truth of being Black and refuses to shy away from any of his truths. This stern belief has led him to be awarded the CFDA Award for Menswear Designer of the Year as well as several television appearances. As well as that, he’s been listed in Forbes’ 2015 edition of 30 Under 30 and Designer of the Year by Harlem’s Fashion Row. Most recently he was named the Vice President of Creative Direction at Reebok. With this new role, Jean-Raymond will be spearheading a new campaign for the company that is specifically to combat racism. He plans to help shape Reebok and the fashion industry into a more inclusive place.

The Origins of His Streetwear

Pyer Moss’s origins are humble but it has grown into a rapidly evolving company. The name was taken from Jean-Raymond’s mother’s maiden name and the name she changed it to in order to get a green card. Before Pyer Moss, Jean-Raymond started his career at the young age of 14 under Kay Unger. At this point in his life, he was still attending high school. Eventually, he graduated and went to Hofstra University where he completed his Bachelor’s before attending law school, although he dropped out after one semester.

Streetwear itself originated in 1990s New York City, where coincidentally Jean-Raymond was born and raised. The style of fashion is based on casual and comfortable clothing. Jean-Raymond takes many aspects of traditional streetwear and adds his own flair to it. While many of his designs may seem simple at first, up close there are a lot of tiny, intricate details throughout the pieces. Because of this, Pyer Moss’s prices range from $175 to $14,000 with t-shirts being on the low end of the price scale and dresses on the high end.

Unlike many other streetwear brands, Pyer Moss is unique in how it approaches clothing. Each piece tells a singular narrative from Jean-Raymond’s perspective and often polarizes audiences on its political messages. By using fashion as a vehicle, Jean-Raymond is bringing attention to Black issues that many people are more comfortable ignoring than facing. For instance, he’s even created t-shirts “that listed the names of victims of police brutality”. The Black American experience has rarely been seen in the fashion industry, and Jean-Raymond is determined to share his narrative.

Kerby Jean-Raymond is unapologetic about showcasing his truth and unwavering in his approaches, no matter how brutal, but he also has an enormous heart. In one of his many television appearances, Jean-Raymond guest-starred as a judge on Netflix’s ‘Next in Fashion’. In each episode, a guest judge is brought in and contestants (who were placed into teams of two) most create outfits to fit the theme. Jean-Raymond’s episode focused on streetwear and by the end of the episode, the five judges were all at a stalemate between the team of Kiki Peterson and Farai Simoyi and the team of Claire Davis and Adolfo Sanchez. There were critiques of each team, but the conflict didn’t stop there.

When the judges came to tell the contestants they were still at a tie, Simoyi made a strong statement about how often minorities are taken advantage of in the fashion industry and their designs are stolen. After Simoyi said this, the judges went back to deliberating but couldn’t come to a consensus. Their arguments got so heated that Jean-Raymond famously walked off the set because he refused to vote for Peterson and Simoyi and continuously stood up for them. In the end, no one was eliminated from that episode but his unwavering belief in these designers added to the criticism of the episode. If people didn’t know of Jean-Raymond, they did after that episode that sparked articles from companies including Decider, Business Insider, and GQ (just to name a few).

While Kerby Jean-Raymond has reached what others may consider total success, he never forgets about those who came before him. For example in Fall 2018 and Spring 2019, Pyer Moss collaborated with brands Cross Colors and For Us By Us (FUBU) which were two brands that were created in the ‘90s. He always remembers the roots of streetwear and makes sure to appreciate them. In another instance, Jean-Raymond created a collection for New York Fashion Week that centered around his dad Jean-Claude Jean-Raymond. The clothing items he designed centered around if a clothing item reminded Jean-Raymond of his dad or not as well as included minute details as personal touches. On one item of clothing, he placed a patch of a hand-drawn image of his father. Another item was based on the coat that Jean-Raymond’s father would wear all the time. No matter what the idea or item, Jean-Raymond made sure to add personal details in order to be true to himself.

Jean-Raymond knows it’s important to pay homage, but he is also forward-thinking. Take the platform he created in 2020 with François-Henri Pinault of Kering that they titled “Your Friends in New York”. Your Friends in New York (YFINY) is a platform that will represent the next generation of minority fashion designers and creatives. While a large part of YFINY is devoted to fashion, there are multiple divisions dedicated to fostering talent in different disciplines. As well as that, there are other aspects of the platform that will help young creatives like a merchandising label as well as philanthropic efforts.