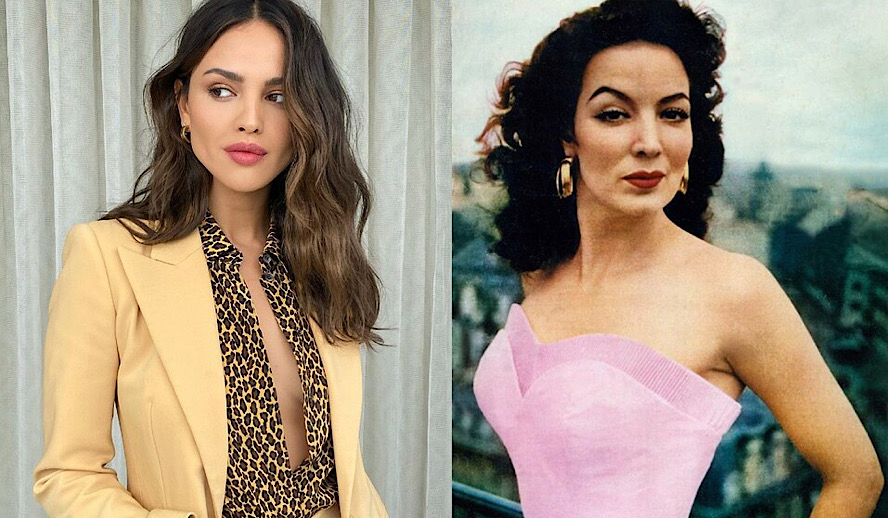 María Félix was born in Sonora Mexico of the name María de los Angeles Félix Güereña on April 8th, 1914. This young girl with 15 brothers and sisters would go on to become one of the most influential figures in Latin American history the world has ever known. Her time as an actress, singer, model and fashion icon revolutionized how the media portrayed and, to an extent, accepted Latin American stars post WWII. She starred in 47 films, modeled for dozens of world-famous painters the likes of Frida Kahlo and Jean Cocteau, was a fashion model for the likes of Dior, YSL, Chanel, and Balenciaga, and released two solo albums as a singer. Most impressively, she achieved these feats as a single mother.

Fast forward to today and Eiza Gonzalez, famous for her roles in ‘I Care a Lot’, ‘Godzilla vs. Kong’ and ‘Baby Driver’, has signed on with Linden Entertainment and Executive Producer Walter Rivera for Félix’s estate to co-produce and star in a biopic about the deceased Latina star. The film has yet to hit production and does not have a finalized script, however, the two producing parties are confident the film will be a success. Rivera said: “We have long been searching for the right partner to tell Maria’s story, and we are proud to be partnering with Eiza Gonzalez as she embodies so much of Maria’s strength, intelligence, passion, character, and beauty.”

Who was María Félix

The Mexican-born star was considered the most beautiful face in Latin Cinema throughout the 1940s and 50s. She was held to pseudonyms, being known as La Doña for her role in ‘Doña Bárbara’ and María Bonita after the song her husband, Agustín Lara wrote for her that premiered at their wedding in 1947. By all accounts, María bewitched all those whose eyes were lucky enough to fall upon her face. She was beloved for her beauty and was the muse to more than a dozen artists worldwide. Playwrights and musicians alike penned works exclusively for her, painters and artists made works in her honor or tried to replicate her magnanimous beauty, and filmmakers begged her to act in their films. María Félix was one of, if not the most famous Mexican woman of all time.

Sadly, Félix died at age 88 in 2002. She is remembered most vividly as her time as an actress during the Golden Age of Mexican cinema. She embodied characteristics that many frowned upon at the time, feminine strength and sexuality, owning her body with grace and vigorous passion. She starred in her first film in 1942 alongside Mexican singer Jorge Negrete, the film was titled ‘El Penon De Las Animas’ or ‘The Rock of Souls’. This film was just her first taste of fame as a true celebrity would find her only after the aforementioned Doña Bárbara catapulted her into the hearts of Mexicans around the world. In the latter stages of her career, Félix would go on to do a number of roles influenced by the Mexican revolution as she portrayed a woman who lived in defense of the nation she loved. Truly, a Mexican icon.

Who is Eiza Gonzalez

Born Eiza González Reyna on January 30th, 1990 in Mexico City, Eiza Gonzalez is a Mexican actress who has gained some serious traction in the eyes of American fans, of late. She has had roles in a few blockbuster films despite her young age, notably ‘Hobbs & Shaw’, ‘Godzilla vs. Kong’, and ‘Alita: Battle Angel.’ Her father died of a motorcycle accident when she was just 12 years old leading her towards chronic depression and eating disorders to cope with the loss.

She cites this loss as a major influence in her life and career path stating in a 2009 interview:

“…like he always took me to school. My dad was very closed to the possibility of her being an actress. He was very much on the idea of my career-ending; So I think that, if he lived, he would not be here today announcing an album nor would he have made a soap opera; although obviously, he would change all that for the fact that he was with me today.”

In that statement Eiza mentions an album release, similarly to María Félix, she is also a musician who has a solo career as a singer. The connections between the two do not end there, Gonzalez is also widely admired and known for her striking beauty and models for runways when not on set for production. As mentioned by producer Walter Rivera, the similarities and coinciding strength between the two is really a powerful force. Rivera states: “We know Eiza and this film have the power to influence change, much like Maria Felix did, and we know in Eiza’s hands, Maria Felix’s legacy will be portrayed in the most authentic light.”

The film is slated to be directed by Oscar-nominated and Emmy-winning director Matthew Heineman. As an accomplished documentary filmmaker, Heineman has the background and skills necessary to put together a very compelling and resonating biopic that will innately affect a wide audience just because of its subject matter. The biopic, specifically, is scheduled to cover most of Félix’s personal life as she rose to superstardom in Latin America and worldwide. Because of this, they need an actress with some decent range and a sense of ageless beauty; it certainly seems they have found just that in Eiza Gonzalez.