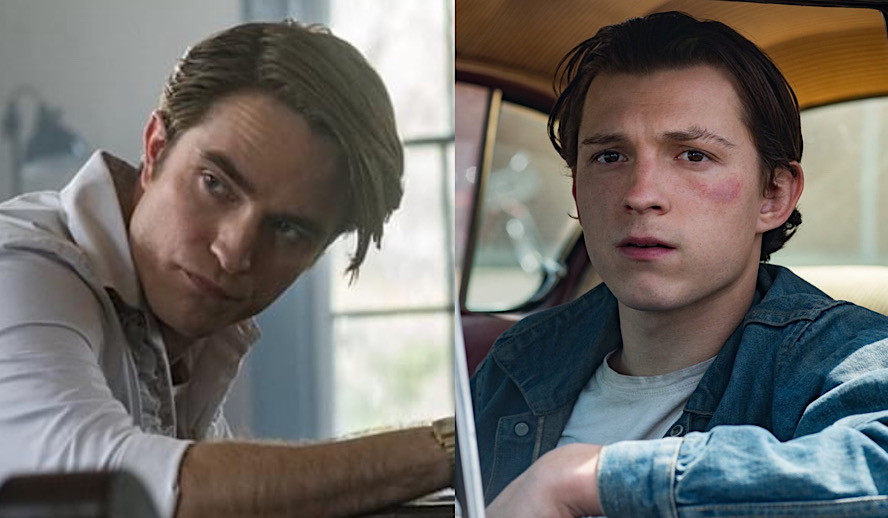 Photo: ‘The Devil All the Time’/Netflix

Netflix has a new psychological thriller starring Tom Holland and Robert Pattinson that is set to hit the screen on September 16. The Devil All the Time features the Spider-Man: Homecoming actor in the role of Arvin Russell, a young man forced to fight the sinister characters that threaten him and his loved ones in a Midwestern Gothic tale that takes place over the course of two decades.

The official premise alludes to the ominous tale that was adapted for the screen from Donald Ray Pollock’s novel of the same name. “In Knockemstiff, Ohio and its neighboring backwoods, sinister characters — an unholy preacher (Robert Pattinson), twisted couple (Jason Clarke and Riley Keough), and crooked sheriff (Sebastian Stan) — converge around young Arvin Russell (Tom Holland) as he fights the evil forces that threaten him and his family. Spanning the time between World War II and the Vietnam war, director Antonio Campos’ The Devil All the Time renders a seductive and horrific landscape that pits the just against the corrupted,” the official Netflix description reads.

Upon the news of the film and the launch of the trailer, fans were immediately thrilled at the stellar cast, that includes Holland and Pattinson appearing as enemies, along with Bill Skarsgård, Riley Keough, Jason Clarke, Sebastian Stan, Haley Bennett, Eliza Scanlen and Mia Wasikowska. Chris Evans was initially set to star in the film, but Sebastian Stan was later cast as his replacement after Evans experienced scheduling conflicts and later personally recommended Stan for the role, as the two of them had been costars in the Captain America and Avengers franchise. Despite his absence, this is still certainly one of the most top notch casts that a Netflix Original has boasted, which, along with its plot, is certainly on track to rack in high viewership numbers.

‘The Devil All the Time’ – Directed by Antonio Campos

“It’s a multi-strand narrative set between the end of World War II and the beginning of America’s involvement in Vietnam in which a motley group of characters’ lives all intersect,” said Antonio Campos in an interview with Entertainment Weekly. The sentiment is echoed in the trailer, as the narration says, “How and why people from two points on a map without even a straight line between them can be connected is at the heart of our story in Knockemstiff.”

The Devil All the Time is directed and co-written by Campos, who is notable for his work on 2016’s biographical drama Christine, the thriller Simon Killer, and several episodes of crime drama The Sinner, which currently airs on the USA Network. Campos co-wrote the screenplay with his brother Paulo.

The upcoming thriller is based on the award-winning novel The Devil All the Time that was released back in 2011. Written by American writer Donald Ray Pollock, it was Pollock’s debut novel, as its plot follows “disparate characters in post-World War II Southern Ohio and West Virginia, including a disturbed war veteran, a husband and wife who are serial killers, and a false preacher.” The book is said to mix “the twisted intensity of Oliver Stone’s Natural Born Killers with the religious and Gothic over­tones of Flannery O’Connor at her most haunting,” and this is certainly set to be the case for the film, as reflected in the trailer.

“It was a hard book to adapt also because there was so much that we loved,” Antonio Campos said. “I’m a big fan of southern gothic and noir and this was a perfect marriage of the two. Sometimes you might be adapting a piece and you think like, Well, there is a seed of a good idea here and I’ll just throw everything away and start from scratch. In this case it was like, we love everything!”

The upcoming film definitely seems to be in line with Campos’ previous work, if the ominous and foreboding trailer is anything to go by. In the beginning of the trailer, Holland’s character Arvin Russel is given for his birthday a gun that his father brought back from the war, which he is seen using in a later tense-looking scene, where he ominously ends the trailer with the statement: “What I’m about to do, I do because I have to. Not because I want to.”

Fans were quick to notice Holland’s Southern drawl, which he mentioned in an interview with EW as he expressed his excitement and satisfaction regarding starring in the film.

“I was really eager to work with Antonio because his previous films that I’ve seen are very raw,” Holland told EW. “I guess it was the challenge of doing a different accent, playing the rural kid, a period film, a new director. Everything ticked the boxes for me.”

Related article: The Rising Star That is Tom Holland On His Way to Number 1

“Tom is a very sweet person and a very generous actor but he’s willing to go wherever he needs to go emotionally for the character,” Antonio Campos said to EW in regards to Holland and his role. “He wanted to go where he had to go. Tom’s electric. He’s sort of sitting there doing nothing and is immensely watchable.”

Meanwhile, Pattinson’s character in the trailer seems just as sinister, as he proclaims that “it is our delusions that lead us to sin,” as a montage of gruesome scenes flash on the screen, obviously signifying that with their two characters comes a lot of trouble within the town.

Campos also discussed Pattinson and his portrayal of the character, saying, “Rob prepared a bunch of ideas and you don’t know what you’re going to get but it’s all interesting. The character coming to life — I saw that in front of me when we were on set.”

Ironically, both actors embody Southern characters and accents despite being British themselves. Holland is no stranger to an American, or more specifically, a New York accent, as seen in his role as Spider-Man in the Marvel franchise, and Pattinson similarly has ditched his British accent in several roles, including his big break in the Twilight trilogy. In fact, the actor has previously discussed intentionally losing his accent during auditions in order to attempt to secure roles in the films he was auditioning for. “I would do an impression,” Pattinson said when speaking with Josh Safdie, the director of Good Time, which Pattinson recently starred in, at the Cannes Film Festival. “I would have another character to go to an audition to play a different character.’

Holland and Pattinson are largely skilled as actors and will undoubtedly contribute to a gripping and suspenseful thriller, especially while being supported by such a heavyweight cast. If you’re looking for an ominous and star-studded thriller, The Devil All the Time will check all of those boxes and is set to appear on Netflix on September 16.