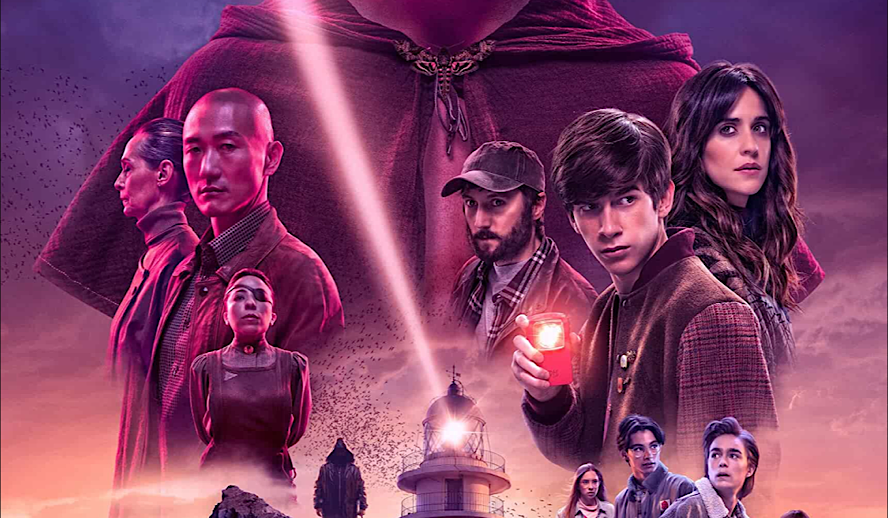 Nostalgia has been the go-to for show creators in the past few years. Forcing audiences to remember simpler times, where innocence was the leading quality, is a magical way to go. ‘Paraíso’ does exactly that but with a pinch of mystery and fantastical attributes added to it.

During the summer of 1991, near the Levantine sea, inside Levante, a town on the coast of Spain, three teenage girls have gone missing. Javi (Pau Gimeno), the brother of one of the disappeared girls, lives his life seeking clues to find them. Javi’s obsessions are supported by his three best friends, Quino, Alvaro, and Zeta, who, just like Javi, will not give up on him or his sister.

Happiness is But a Leftover in This Town

Ten seconds into the first episode, a continuous shot transports us inside the town of Levante, where Javi is seen living a normal life. The pre-teens ride their bikes towards the reality we are about to encounter, while late eighties’ poppy music plays in the background. But as we look closer, we realize something in the town has taken its habitants by storm, and the happy remains the characters have, is only the music that accompanies the era.

‘Stand By Me’ Vibes

At first, the series seems like a modern-day version of ‘Stand By Me’ but adding to the pack of kids a few girl leads and the Spanish coast. As the time keeps running, you quickly realize that ‘Paraíso’ has extra elements that were not expected from the start. The characters in ‘Paraiso’ are suffering a hell that they do not know how to get out of, one they never asked for in the first place.

Javi’s obsession lies in the reflection of his father’s behavior. The father spends his time neglecting his son and looking for his daughter. The series entices the idea of an individual who cannot see past a traumatic event, forgetting to appreciate what is in front of them. ‘Paraíso’ recounts the brutal nature families go through when someone in their group has disappeared, leaving nothing but dust and no idea of where they’ve gone.

It’s Not What You Expect, But Something Similar

At first, ‘Paraíso’ feels like a typical murder mystery, but the series follows an unexpected twist into the land of fantasy. I’m not sure if it’s good or bad, but suddenly you are wondering where the story is going. ‘Paraíso’ is like a version of ‘Stranger Things’ minus the aliens plus a hint of Italian cinema-style added to it and beautiful shots of the European coast.

‘Stranger Things’ Was The Obvious Inspiration

‘Paraiso’ is made for those who have nostalgic feelings towards ‘Stranger Things’ new seasons and, after four seasons, are craving more of it as ‘Paraíso’ leads with many of the same elements that made ‘Stranger Things’ great. If you’re in the mood for parallel universes and inexplicable supernatural beings, then this is the show for you. If the story doesn’t do it for you, you will not feel like you’ve wasted time; at least the visuals are pretty entertaining.

At the core of the series lies the importance of relationships and the support that should come with them when overcoming hard times. The parallel universe serves as an escape and allows the circumstances to go off the rails as much as they’d like. Still, unlike many sci-fi series, the fantastical element in ‘Paraíso’ is rooted inside many heart-wrenching situations, adding various realistic features that take you on a supernatural rollercoaster to a level of concern and empathy.

The series also takes its time in calling out fundamental social issues to the Spanish world. Thanks to the premise being in a small town, the introduction of an Asian officer, Zhou (Yoon C. Joyce), calls out ignorant behaviors against Asians. The premise allows highlighting Spanish racism against people of color without feeling forced or falsely “woke” to appeal to the masses. It seemed like an asset added, naturally. ‘Paraíso’ took the time to add this moment as an essential element, mainly because you do not encounter many actors of Asian descent in Spanish series. We get introduced to this behavior with honesty, as the show does not shy away from realistically highlighting this issue. By calling its officer derogatory terms like “yellow” and “little spring roll,” portraying the name-callers as idiots, reflects their stance on racism.

The cinematography conducted in the series takes the lead in the show. If it weren’t for its aesthetically pleasing continuous and wide shots, the series would not be the same. The choice behind it gave a sense of community rather than focusing on one character. The lighting design adds to the element of fantasy, helping the narrative in the best of ways. While watching, it feels like you are walking on a beautiful nightmare, with neon lights reflecting here and there, afraid to encounter a parallel universe monster.

Puppy Love and Innocence Rides Along

The writers did not forget to add innocence behind their characters, as most of them are coming of age. There is the element of integrity, love, and the feeling of what could’ve been. You live those moments with its leads and grief with them at the lack of regular life. Bea (Maria Romanillos) is Javi’s love interest, her portrayal takes us back into a time when butterflies in our stomachs were consistent, and the hope for a first kiss was our biggest problem. The nature of her character, and acting skills, make us feel for her when things do not go as expected.

It Still Contains Qualities Of Its Own

‘Paraíso’ is a beautifully shot series, with elements that are obviously inspired by the Netflix show ‘Stranger Things,’ but with that, it doesn’t mean that ‘Paraíso’ doesn’t have original qualities of its own, because it does.