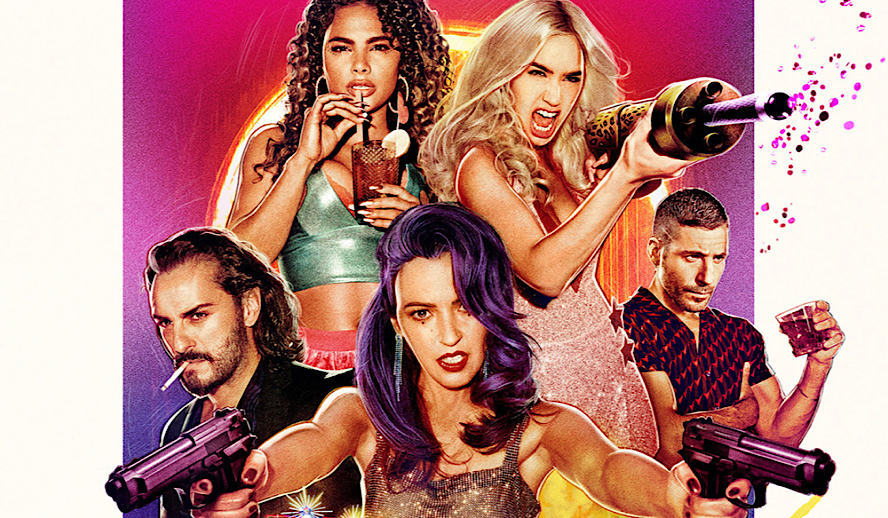 ‘Sky Rojo’ chases, quite literally, the lives of three completely different women who, because of a cruel twist of fate, end up working as prostitutes in a Spanish brothel. After a failed attempt at killing their pimp, the three women flee the scene and fight courageously to survive between the hands of hitmen and nasty men. ‘Sky Rojo’ encourages anger and revenge in the best of ways. As the episodes pass, the show conducts you into a high-rise of red emotions, where fuming anger is the main sentiment towards almost all male characters.

The Spanish-speaking series keeps its audience intrigued by putting in the forefront the ongoing question of morality. Entertaining its viewers while showcasing its characters struggle and wrestle against the ancient query “do the ends justify the means?”

When I first looked at the description for the show, I thought it wasn’t for me.‘ Sky Rojo’ is considered an action series, and that genre has never been my thing. But after a few minutes of watching, I came to the conclusion that I was wrong. The characters are introduced, and you get a feeling that you’ve never seen this story before. It also doesn’t hurt that their set design is accompanied by incredible neon lighting design, fantastic desert backdrops, and uniquely colored vintage cars. I am also a sucker for costume design and makeup.

And this series did not fall short on thinking of the most minimal details to bring this remarkable story to life. The women’s faces are decorated with glitter, stones, matching neon eyeliner, and different colored hair. It’s like you’re stuck inside a Karol G music video, but instead of hot dancers, you have badass women, powerful friendships, and an extremely captivating storyline.

In Season One, the audience is introduced to the hustled life of a prostitute. Many of them, who are migrating from different parts of the world. Several themes touch the surface, but the one that is especially highlighted throughout this season is the subject of human trafficking.

Different girls have similar stories on why and how they ended up being regular tenants of Romeo’s brothel. Most of which is one where the predator takes advantage of the innocence of a young girl. The predator often promising the innocent girl the world at her feet, only to find out later, the idea of a better life is always too good to be true. The innocent girl foolishly ends up captive inside the strangling hands of a greedy pimp. What sets the plot for this first season is the need for freedom and a yearning to have a regular life.

The episodes are perfectly set to test the women’s courage and help the characters grow towards strength and determination. The women in ‘Sky Rojo’ set themselves apart because of their unique voices and their different personalities to each other.

The men play an essential role in ‘Sky Rojo,’ their ingrained sexism and misogynistic mentality make them believe to be doing more good than bad. Their ego needs to be intact if a woman wants to survive. I caught myself sneering in repulsion, more often than not, whenever they spoke about their ideas and business opportunities. Their urges are often uncontrollable, and just like a child throwing a tantrum, they do not know how to behave, ever. There need to be the ones with the last word, creates an exhausting loop of revenge between the men and the women of the show.

There are a few forbidden love stories that make your head spin in confusion. But also fills your heart with hope, wishing for the characters a nicer, softer life.

If I’m going to talk about the men in ‘Sky Rojo’ I will not forget to mention Moises (Miguel Ángel Silvestre) because although he is the boss’s main hitman, Moises is extremely easy on the eyes. Sometimes, making you root for his happy ending.

The women in this show, Coral (Veronica Sanchez), Wendy (Lali Espósito), and Gina (Yanis Prado), embrace their career paths and are not ashamed of their profession. They take you back to a Spanish neon-lighted version of ‘Hustlers,’ the movie with J.lo and Lili Reinhart, where the girls make it their job to become assailants and step entirely away from the role of the victims. The same goes on in ‘Sky Rojo,’ these women refuse to be stepped on and be left to be forgotten. They want to make every man pay for their wrongdoings, making them suffer the exact same way they have.

I often get extremely bored when a car chase scene begins, I usually find them to be way too long and extremely unrealistic to keep me watching. I was very excited to find that was not the case here, the creators of the show, found the perfect balance for a good length of car chasing scenes and crazy shootings. In ‘Sky Rojo’ the car chasing scenes never seem to drag, and they are often grounded by a realistic approach, making the eyes of the viewer stay on track to the girls’ destiny.

Season one ends with an enormous cliffhanger; I won’t even give clues to not spoil it for you. I binge-watched both seasons in like two days. I am not ashamed to say that out loud.

Season two resumes right where they left off in season one. We continue to follow Coral, Wendy, and Gina as they fight relentlessly for their life. Season Two explores the rooted feelings of revenge and the idea of second chances. The characters have now evolved into realizing all the wrong they’ve done, continually questioning if, at the finish line, do the ends justify the means?

Watching these women grow the balls (excuse my French, I know I should be speaking Spanish instead) to execute plans and deal with sexist men, who treat them no better than a broken condom, gives for powerful performances. The men of the show are not behind when it comes to their performances, they nail each role.

There’s a strong sense of loyalty throughout the show, one that roots problems when there is a suspicion of betrayal. But the best lesson we can get out of ‘Sky Rojo’ is that its characters never cease the fight for freedom and the hope of reaching a better life.