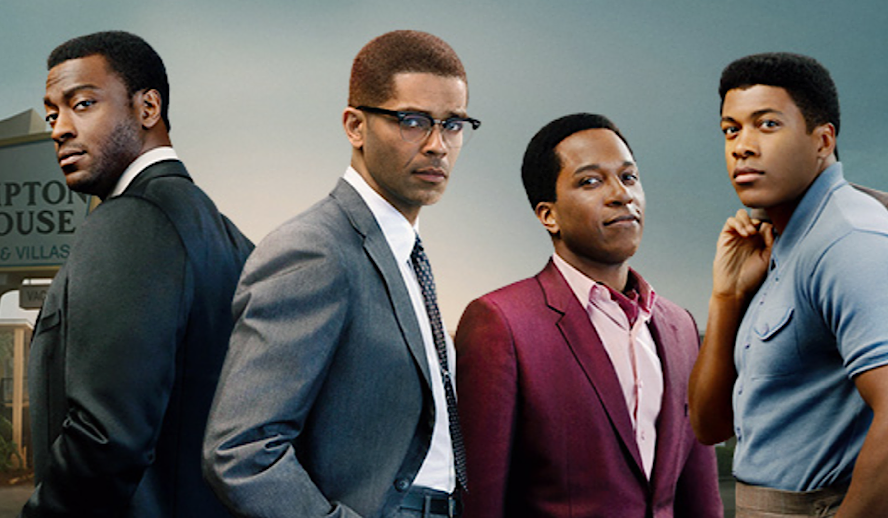 Photo: ‘One Night in Miami’/Amazon Studios

Regina King knocks it out of the park with her featural directorial debut ‘One Night in Miami’. A soaring picture, the film is essentially the convergence of four different biopics, and the merger creates a stunning image of nuanced Blackness. Following the real night that took place in 1964 between civil rights hero Malcolm X (Kingsley Ben-Adir), vocal legend Sam Cooke (Leslie Odom Jr.), NFL hall-of-famer Jim Brown (Aldis Hodge), and Cassius Clay (played by Eli Goree) in a hotel room celebrating the boxers world champion title.

Although the night actually took place, ‘Soul’ writer Kemp Powers took imaginative liberties to outline the specifics of the type of conversation that likely happened inside that room. Converting his play of the same name to the screenplay, Powers and King both have kept the theatrical heartbeat of the piece.

Related article: Three Reasons why Regina King’s Directorial Debut ‘One Night in Miami’ is a Must See

The Brilliance of Simple, Truthful Storytelling

What makes this film incredibly unique and perfect for King’s debut is its mundanity. Although they’re legends in their own respects, the film is simply four men in a hotel room having one long conversation. In that way, ‘One Night in Miami’s’ stage origins are transparent. However, this does not become the film’s weakness, in fact, the mundanity becomes the film’s greatest strength.

Far too often, Black stories (especially the ones told by white writers and directors) make the mistake of filling up the Black experience with an overload of trauma or some other filler that inevitably blows our realities out of proportion. What Powers so delicately weaves is a story so concentrated that no relevant thematic stone goes unturned.

A film that focuses on dialog and the beauty in small moments is perfect for a brilliant actress’s directorial debut. This is because a director’s role in such a microscopic picture becomes to examine every detail, make use of every line on the page and every second of action. King doesn’t spare a single moment, and her keen attention to what’s occurring beyond the camera submerges you right into the scene. In taking all the intimacy and personability of theatre and marrying it with the magic of film, King and Powers put you right there in that Miami hotel room, as four historical giants transmogrify.

Unraveling What’s Beneath the Surface

One thing the trailer doesn’t tell you is how much conflict these four friends have amongst themselves. While all four of these heroes on screen might be a treat for the viewer, it isn’t all peaches and cream for these men at the turning point of their careers.

Goree is especially surprising in his buoyancy. Goree’s acting ability in his scenes is just as fluid as his footwork in the ring. Even when Goree is literally up against the ropes, he gleams with a refreshing joyousness. While Clay is the only boxer in the hotel, everyone eventually dukes-up against each other when their ideology is challenged or their morality questioned.

One of the most potent themes the film fearlessly examines is separatism versus unity. In other words, Powers heavily emphasis one of the problems many Black individuals face when they begin to work towards the goal of Black empowerment: is the goal of our work to make white people accept us, or for Black people to liberate themselves? The answer is far less Black and white than we’re often led to believe. Even Malcolm X, someone who’s been characterized by history as being uncompromisingly militant, finds himself chipping away under the pressures he’s faced with.

One Night in Miami Review

In Malcolm X’s autobiography, he describes the mental peril he experienced as he sensed his impending assassination. At this stage in his life, Malcolm X is grappling with tension from The Nation of Islam, being followed by FBI agents, hatred from white America, and the responsibilities of carrying a large portion of the Civil Rights Movement on his back. Newley Gotham Awarded Ben-Adir is simply unbelievable, seamlessly crafting a Malcolm X unlike one the world has ever seen. What are these people like behind closed doors— that is the question the film so captivatingly answers.

In fact, every character is found at the crossroads of their destiny in this tiny hotel room. Some announce their religious devotions, others make career changes, some, life-altering confessions. And so magically, an ordinary hotel room becomes a cocoon in which each character undertakes their respective metamorphosis.

This film is equally strong in its supporting cast. Tony-Nominated Joaquina Kalukango delivers a solid performance playing wife to Malcolm, Betty X. Malcolm X’s security guards, Kareem X (Lance Reddick), and Jamaal (Christian Magby), provide comedic relief in their respective ways. Emmy Award winner Jeremy Pope makes an appearance as well, playing an electrifying antagonistic Jackie Wilson and his presence adds a surprising jolt of electricity to the film’s final act. Casting wise, the film is airtight, and that’s vital for a movie that relief just about entirely on the dialog to deliver its punches.

From a macro-lense, ‘One Night in Miami’ will live on to showcase precisely the importance of having a Black writer and a Black director behind stories about the Black experience. While the film has it’s respective dose of tragedies and racial profiling, those elements merely become the backdrop for a much more compelling story. The film is not about Black suffering that’s just one of the many circumstances fueling each character’s fire. The film is about the rare truths most people don’t get to see in us; the storms inside us that go unbeknownst to the majority of the world that’s what the film sheds light on.

As we near awards season, ‘One Night in Miami is a serious contender for a variety of categories. Regina King could make history with a win as the first Black female winner in the category. Ben-Adir could add an Oscar to his Gotham award if he manages to snag the nomination and beat out his competition. Even in a reality where ‘One Night in Miami’ doesn’t earn the attention it deserves from the Oscars, it won’t be a reflection of the movie’s significance. The film itself reminds Black people that our greatness is not in the eyes of white people in power, but rather in the space between our unified hands, standing together as one. Go see ‘One Night in Miami’ streaming now on Amazon Prime Video.