‘Night of the Kings’: A West African Griot Tribute With a Twist 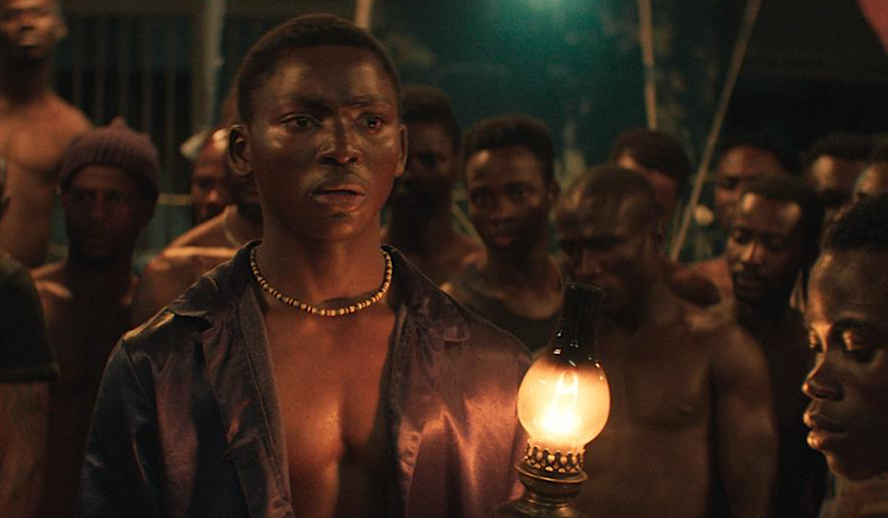 Photo: ‘Night of the Kings’/Neon

“I saw La Maca like a Kingdom-” – Philippe Lacote

Even though ‘Night of the Kings’ (‘La Nuit des rois’) derives part of its inspiration from ‘One Thousand and One Nights’, often known in English as ‘Arabian Nights’, its originality makes it a notable leap from any traditional prison film circulating the Cinematic universe. This captivating climate is a concoction from the director’s own experience, combined with some magical realism, at Ivory Coast’s correctional facility – La Maca – where he would visit his mother who was sentenced for political reasons. The story stars an incredibly talented new actor, Bakary Kone, who makes a compelling lead as the appointed prison story-teller. Referred to as “The Roman”, he is chosen as the improvised storyteller who must fulfill his duties to entertain his fellow inmates.

The heart of this story is already being built in the first few minutes, with vivid images detailing the day in the life of the prisoners there. We glide through halls of men playing games using rocks as checker-like pieces, faces wet with sweat, prisoners dancing, one single prostitute, and floors buzzing with chaotic energy. The prisoners have their own set of rules and customs, and it is clear that stories are valuable to their way of life, even in all the riotous activity–perhaps especially because of it.  The new “Roman” seems hesitant at first when he is chosen shortly after his arrival at La Maca, but his instincts kick in, and he begins his story, surrounded by the swarm of unfamiliar faces, some eager to listen–some eager to critique.

As he goes on, the inmates add an enthralling interactive element to his narrative, participating and adding to his story with their own improvisational performance. Through dance, song, and movement, they shape their bodies to depict animals or emotions and use their own creativity to breathe life into the story. The Roman brings up a person they have all heard of (the Zama King–leader of the Microbes Gang–who resided in a place called the Lawless Quarter) and was recognized as a kind of slick criminal. It’s hard to really tell if some parts of the story were true because Bakary (The Roman) includes some battles of sorcery and various magical elements that make you question how much was actually spun from his imagination alone.

Drawing from ‘Arabian Nights’, Lacote adds a twist, and about half-way through we discover that the end means “the end”, and the Roman is to be killed when the story concludes.

‘Night of the Kings’: The Griots – Agents of a Cultural Revolution

We come to find out that the Roman was the nephew of a Griot, which added a layer of mysticism–channeling the creative energies of his ancestry to tell a tale that will alter his fate, and stir a shift in the current prison climate. Griots were real poets and artists in African culture and not just anyone could become a griot, you had to be an heir of their gifts, so they were considered special in this way. Though historically over the centuries as technology has increased their diplomatic roles have undergone a transformation and have diminished significantly. The roles performed by griots were once very important for the preservation of a people’s history– especially in societies with no written language.

They are sometimes associated with Roman bards as they are the oral storytellers, musicians, and poets of their culture–who were considered powerful and prestigious. Often called upon to intervene in village disputes, they were once highly regarded and respected. As fundamental as any historian today, Griots served a primary function in these cultures by maintaining a large reservoir of epic narrative songs which described major historical figures and events. (This once again makes you wonder whether the story he told was mostly true, at least emotionally, but with added magical realism to communicate certain energetic indifferences and power dynamics.)

As their status became more associated with the general population, they became more dependent on the generosity of others for payment. In West Africa, where poverty and unemployment are commonplace, Griots relied on a network of hosts, patrons, and benefactors for income–this reliance was largely responsible for the rise of praise-singing, and the diminution of their performative epic narratives. Their status was essentially demoted to mere flatterers–pandering to the wealthy and the elite. This highlights the interesting dynamic we see in the prison, where the Roman is– in some way– highly regarded as valuable, but simultaneously, an expendable pawn for entertainment.

However, in Africa’s history, a type of resurgence occurred in the post-colonial period when nations embarked on ambitious campaigns aimed at revitalizing their cultural and artistic traditions. Government policy began promoting initiatives to modernize their traditional art forms, rather than adopting an approach that would celebrate their traditional culture. In one way, they had won a battle. These initiates provided a new platform for artists, but only to meet the needs of the modern state. They established both regional and national music festivals and orchestras where they were placed on a government wage.

They purchased instruments from artists and distributed electric instruments, encouraging them to make new music. While their roles in communities rose in status again, their art was adjusted and modernized. Though it led to an evolution of new art, artists of this period pioneered the use of traditional music alongside the electric while using their indigenous language. Essentially, the government became a patron of the griots, supplying them with instruments, venues, and income.

The ‘Night of the Kings’ seems to embody this in a sense. This boy of La Maca, the new “Roman” of the night, a former thief–trying to make his way in the Lawless Quarter– uses the forces of their own powers against them, to reclaim power for his own, and pivot history, for a future in his favor.

As one of the most cinematically underrepresented continents even in 2020, the rise of African films is essential. I’ve said it once and I’ll say it again, story-telling is one of the most valuable tools we have as a species. It’s more than just entertainment, it’s language, its education, it’s history. The pandemic has been a harrowing time for so many, but through this rise in digital platforms, more voices have the opportunity to reach more viewers. This film was rented through ‘LetterBoxd’ with about six other rising films and all could be viewed at home, for twenty dollars.

Yet, there are more avenues for content to reach more people and expose them to new ideas, ways of life, and content. While unfortunately there are still people who can’t afford to spare their money on entertainment, the world of Cinema is transforming, and for that I am hopeful. If history repeats itself, perhaps this evolution in digital technology and streaming platforms will help mitigate some of the classist structures that isolate those who lack the resources from accessing these stories–and furthermore, allow diverse stories and voices to be heard.

Directed and Written by: Philippe Lacote