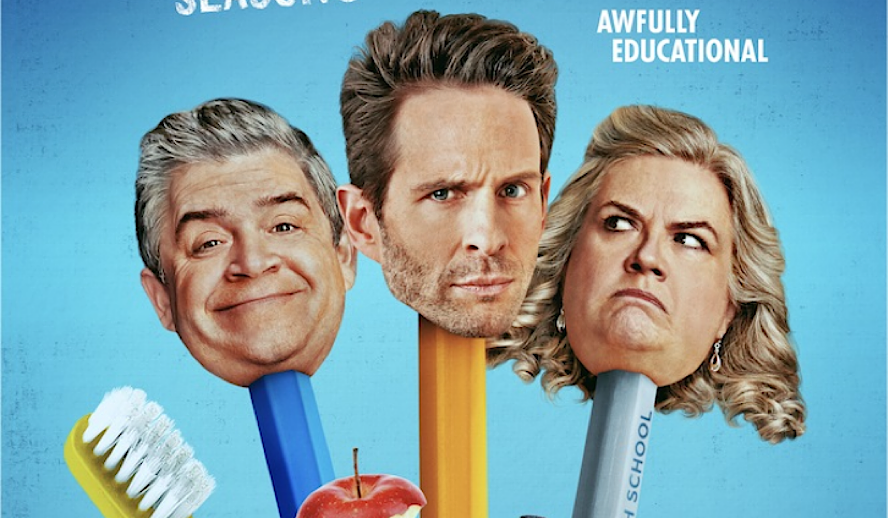 There are many shows that air on broadcast networks and never find their audiences. Most of those shows wind up getting cancelled, but some are lucky enough to find another home to continue, usually on a streaming service.

‘A.P. Bio’ is one of those lucky shows, having made two seasons for NBC and was just finding its footing when NBC cancelled but got lucky when Peacock wound up picking up the show for a third season. This ultimately gave the show a chance to grow and be creative in a less stringent environment in such a way that it has been renewed for a fourth season, yet most people have not even heard of it despite being one of the funniest shows available right now.

The show centers on Jack Griffin (‘It’s Always Sunny in Philadelphia’s Glenn Howerton), a disgraced Harvard philosophy professor who winds up having to go back to his hometown of Toledo, OH, and teach A.P. Biology, a subject which he knows absolutely nothing about, at his old high school. Surrounding him is comedian Patton Oswalt as Principal Ralph Durbin, ‘Saturday Night Live’s Paula Pell as Durbin’s secretary, Helen, a trio of female teachers and best friends played by Lyric Lewis as history teacher Stef Duncan, Mary Sohn as art teacher Mary Wagner, and Jean Villepique as home economics teacher Michelle Jones, and an eclectic group of students hoping to learn something about biology (spoiler alert: they do no such thing).

While the premise seems fairly basic, the show does a phenomenal job of taking that simple premise and giving it some heart and lots of laughs through the development of the characters and the antics that bring everyone closer together even if they do not want it.

Much of the first two seasons of ‘A.P. Bio’ focuses on the adults of Whitlock High School. Almost the entirety of the first season is about Griffin attempting to form a revenge plot against his rival who stole his dream job at Harvard out from under him. While his students help him brainstorm and attempt to execute these plans, Griffin is the central character; he is the main focus of the story. Howerton’s dry and deadpan humor is on full display here and makes the viewer come to like a character who really does not want to be liked. As the second season progresses and into season three, Griffin eventually loosens up more and eventually embraces the position he has been given, beginning to actually care about his students and finding some comfort in his situation.

Principal Durbin and Helen spend the majority of the show interacting with each other, dealing with a myriad of issues around the high school. Oswalt is always able to elevate the material he is given and can make just about anything funny. Pell proves here what an excellent physical comedian she is, making even the most minimal joke a laugh-out-loud line. Both of their characters have an optimism that only slightly wavers in tough situations and that constant positivity makes their characters all the funnier when they end up in tough spots (which seems to happen a lot).

The trio of female teachers tends to act as the loose and whacky foils to Griffin’s stoic deadpan. They usually put him in situations where he has to come out of his shell and are the ones who explain the various quirks that come with the school and city’s community while also getting up to their own antics. Their quips are some of the funniest on the show and liven up every scene they’re put in.

‘A.P. Bio’ gets its name of course from the high school class, which means a lot of the characters are going to be students. With a lot of shows that take place in a high school but have teachers as the main characters, the student characters tend to get swept to the side and have a minimal role in the show. However, what ‘A.P. Bio’ does best is create an environment where the students seem to be on an almost equal footing to their teachers.

The only students heavily featured in the show are those in Jack Griffin’s class. There’s just about every character archetype you could imagine in this one class, from the overachieving, likely Ivy League-bound student, the person who would normally be the teacher’s pet, the band kid, the off-putting one who is maybe a little too interested in meat production, the football player, and those are just the ones who get the most speaking time let alone the rest of the twenty-person class.

These student characters might start out as side characters,there to assist the adults in their storylines, but as the show continues to move forward they have been given prominent storylines not reliant on the adults and have come into their own as individuals. These characters are just as funny, and at times even more entertaining, as their adult counterparts and help bring more excitement and energy to scenes and characters who would normally contribute the opposite feeling.

I happen to have a very dark sense of humor which is one of the many reasons I was drawn to ‘A.P. Bio’. This show feeds off of a more chaotic, cynical comedy which makes sense considering the premise of the show. A show which surrounds revenge plots gone wrong for its first season is going to have its fair share of humor. The second season focuses more on getting to know the quirks and people of Toledo and season three focuses on the people within Whitlock High School and their antics.

Occasionally there are some bottle episodes, some very meta, and self-aware plot devices, but all of that is based on the sarcasm and love-hate humor and relationship between Griffin and his students. With the student base wanting to learn biology to put on their college applications yet having a teacher who will do literally anything except teach them biology, there is some barbing and tension initially. Over time as the students learn more about life from aiding and abetting their teacher and as he grows to tolerate them there becomes a more genuine understanding that brings about another level to the biting and sharp-witted dark humor of the show.

This show is definitely a more quirky and niche show, but it’s one that once you start watching you become drawn into the scheming and plotting of the characters and eventually come to love everyone on the show, even the tiniest of side characters. Even with its dark humor, ‘A.P. Bio’ teaches its characters and audience lots of life lessons… just don’t expect to learn any biology.