‘Eiffel’: Paris is, First and Foremost, the City of Love 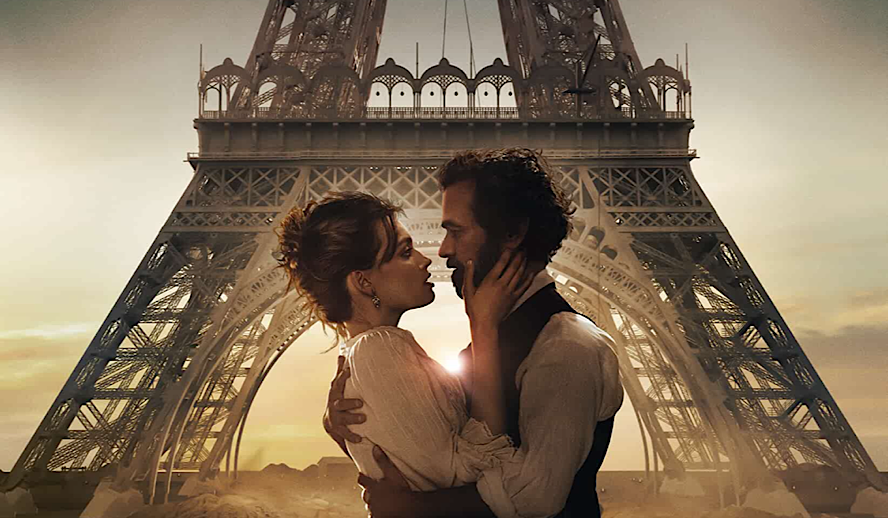 Paris is as much a media icon as it is a city. Outside of Europe, Paris is often idealized as a city of love, culture, and lavish lifestyles. Writers moved to Paris to produce their best work, the American in Paris became a troupe in itself. So, in being a media phenomenon, there’s quite a bit of symbolism that tells you right away that a story is set in Paris. It could be the cafes and the patrons wearing berets, perhaps a customer leaving a market with a baguette artistically sticking out of a canvas tote. But, primarily, it’s the Eiffel Tower. The Eiffel Tower can be seen in a postcard-worthy background in just about every Parisian set film, episode, or a single scene. It’s iconic, not only as a landmark, tourist attraction, or piece of history, but as a representation of the media’s romanticized Parisian life.

‘Eiffel’ is not the first film to center itself around the tower, but it is unique in the way it represents not just the tower but the man. Gustave Eiffel was the real engineer responsible for the tower, and his story is (sort of) brought to the forefront in this film.

‘Eiffel’ follows Gustave Eiffel as he establishes himself as a world-renowned civil engineer, the man behind many of the most recognizable structures on Earth, but the construction of the tower itself is not the primary focus of the film. Most of the film is spent unfolding a romance between Eiffel and Adrienne Bourgès, a former flame that rekindles throughout the film. Eiffel and Adrienne had a dramatic history, from falling in wild and all-encompassing love, to being separated, and Adrienne marrying another man. Adrienne’s father was disapproving of their relationship, though the reason why was not immediately revealed.

The B plot brings excitement to the history lovers as Eiffel needs to fight his way to completing the construction of the Eiffel Tower. Of course, we all know how this story will pan out, but it’s interesting nonetheless as various circumstances create their own unique challenges. The history behind the tower is recognized and given screentime, it just is not the primary focus.

A Mix of Real History and Fictional Romance

If you want to understand how much of ‘Eiffel’ is history and how much is romance, think of ‘Titanic’. If you asked someone to classify ‘Titanic’ into a genre, it’d be a romance, one of the most iconic romances in film history. It just so happens to take place during a historical event. While ‘Eiffel’ doesn’t have any icebergs or sinking ships (it does have plenty of French girls), it’s the same sort of situation. Jack and Rose are entirely fictionalized characters, just as Adrienne is. The film’s version of Gustave Eiffel is entirely removed from the historical figure, the love story is just told in the context of his life.

There is plenty of historical context in the film, for example, Eiffel’s career began taking off after the Statue of Liberty (another Eiffel creation) was gifted to the United States. It’s just enough to remind you that this is a historical romance, set in a recognizable time and place in history. There’s no mystery surrounding whether or not the tower will be completed, we all know it was, so the stakes in the historical plotlines are low, allowing the viewers’ full attention to be given to the romance.

‘Eiffel’ is told nonlinearly, giving us bits and pieces of Eiffel and Adrienne’s relationship through the years. Their relationship endured many stages, from childlike wonder to years of separation. We don’t learn this all at once, or as time passes, or as any typical love story unfolds. The romance is full of plot twists and shocking turns as information is revealed little by little. As a viewer, you’re constantly trying to fit pieces together in your head as more and more questions are left unanswered. Why was their love forbidden? What caused their separation? How will they ever rekindle the love they lost so long ago?

The nonlinear plot is incredibly effective in the film’s storytelling as it guarantees a level of viewer engagement that may have otherwise been hard to come by. As my previous ‘Titanic’ example suggests, a historical story of forbidden or otherwise doomed love is in no way groundbreaking; We’ve seen couples been torn apart time and time again only to be reunited with great confessions of love, and these stories tend to thrive in the past when women had less agency over their lives, there was often an overbearing father or issues of independence. So, ‘Eiffel’ could have fallen into the trap of retelling the same story we’ve seen so many times before, but even if parts were predictable elements of romance, it didn’t seem that way as information was revealed slowly and dramatically.

Adrienne is played by Emma Mackey, who was recently seen in ‘Death on the Nile’. Mackey is also, perhaps best, known for her role as Maeve Wiley of the Netflix Original series ‘Sex Education’ which has a large and dedicated following after three successful seasons. Mackey, a French-British dual citizen, played her first notable French-speaking role in Adrienne, and her acting prowess unsurprisingly transcends language. Although the information is revealed slowly it’s always incredibly obvious what emotions Adrienne is experiencing, as even if she is not speaking Mackey is able to convey a lot through her facial expressions. Director Martin Bourboulon was not shy with the closeups, especially on Adrienne, and each one allowed Mackey to perfectly tell Adrienne’s story with subtle yet telling facial expressions.

Eiffel himself is played by Romain Duris, who adds high levels of charm and charisma to the film. As Eiffel faces challenge after challenge it’s easy to continue to root for him due to his star quality and allure. Duris and Mackey delivered plenty of chemistry to drive their thrilling romance. Overall, the casting played a significant role in making this film great.