The Allure of ‘Bridgerton’: Rewriting Romance 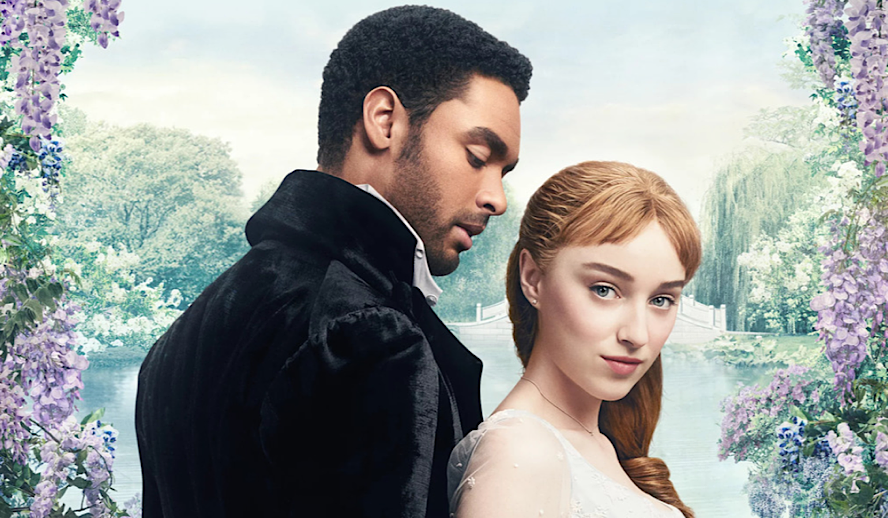 With the new season of ‘Bridgerton’ finally approaching, here’s a look back on how Julia Quinn, the writer of the novels the acclaimed series is based on, celebrates intimacy that leans in on the female experience. The show is more than just an aesthetically pleasing piece of escapism; it features the antiquated conventions of high-society and feminine woes. Jane Austen-inspired wardrobe even made a trendy comeback in 2020 following the release of the first season. Unlike Austen’s subtle approach to romance, Netflix’s ‘Bridgerton’ closes the gap between female sexuality and the significance of intimacy in romance.

The historical context of Regency London provided an undertone of repression and stifled emotions that slowly build the tension between characters who are ready to find passion amidst societal limitations.  The series marks a woman’s need for sexual agency and complete autonomy over her life. In short, if you’re tired of the conservative romance found in classic period pieces, allow ‘Bridgerton’ to spice up your Holiday season. It’s an exciting series that follows the lives of endearing characters in their pursuit of love and self-contemplation.

‘Bridgerton’ – Behind the Glamour

Behind all the glimmer and ornate ballgowns are poignant conversations on the constraint society still perpetuates on femininity. ‘Bridgerton’ carries an inherent sense of restraint women endure in terms of passion and the lack of encouragement to pursue educational achievements alongside their male counterparts.

The show reflects how women are often reliant on orchestrated matches with suitors who conveniently possess social capital and wealth. We watch as marriages are treated merely transactional and how women are forced to sacrifice the possibility of romantic attachments for the safety net of wealth and nobility. If you’ve watched the show, you may have noticed that characters like Daphne (Phoebe Dynevor) and Eloise Bridgerton (Claudia Jessie) share a mutual air of confidence that arguably stems from their family’s accumulated wealth and high-ranking status.

Whether intentional or not, viewers could easily compare their attitude towards romance to the other women around them. As young women come of age, it’s easy to notice they’ve never had to endure the stress of financial strain, which allows them to streamline their energy into self-reflection and various hobbies. At the same time, the Featherington’s are slightly obsessed with marriage and potential suitors who could assumingly solve their economic misfortune.

‘Bridgerton’ centers on the upper echelon of society and specifically, Daphne Bridgerton as she’s ready to make her introduction to society. For those who enjoy period pieces, the series offers a welcome change of pace as we witness a realistic version of a woman who’s on a path of sexual and personal exploration. Through her intimate journey, she develops a sense of self-assuredness that guides her to trust the power of chemistry and understand the boundaries protecting her self-respect. We watch as she creates a connection to the Duke of Hastings (Regé-Jean Page) and how their friendship develops into a meaningful relationship that takes them out of their comfort zones. Quinn’s unique voice strips these noble characters of their airs and injects a sense of humanity that makes them feel relatable for modern audiences.

Despite the show being considered one of Netflix’s steamiest shows, there are also important topics that are sometimes diluted or ignored. Eloise’s tunnel vision toward becoming an accomplished writer is inspired by the influence of Lady Whistledown establishes. Rather than enjoying the petty gossip, Eloise is attracted to the professional influenceWhistledown exhibits and how she commands men and women to pay attention to her words. Eloise is a character that raises awareness of how women are intentionally forced to make themselves intellectually smaller for the egos of men who may feel intimidated.

‘Bridgerton’ presents women from all walks of life and how their place in society affects their perception of romance and relationships. Siena Rosso (Sabrina Bartlett), Anthony Bridgerton’s (Jonathan Bailey) lover, is willing to accept the impulsive passion without demanding the respect she craves from Anthony. It isn’t until she’s left feeling abandoned that she realizes what she wants from a partner. Whereas Daphne, Eloise, and the men are poised toward having more control in their love lives.

What makes ‘Bridgerton’ so compelling is the nuanced approach to female empowerment that disrupts the refrained and conservative world of Regency London. It’s a beautifully produced show that draws on nostalgia but holds enough depth to carry the weight of sensitive topics. The first season starts with Daphne attempting to become familiar with her femininity through self-pleasure. As a viewer, it’s refreshing to watch a female character exploring her body in a way that’s rarely depicted before. It connects modern-day viewers to a moment in time that is notably stigmatized by repression.

Without question, you will not find any acts of self-pleasure in the published works of Jane Austen or the Brontë sisters. That’s what sets this series apart from classic period dramas. ‘Bridgerton’ isn’t afraid to correct the errors of the past. In an interview, Julia Quinn dismisses the notion of the series being purely sexy. “The difference is you see it through the female gaze rather than the male gaze. That feminization of intimacy is so revolutionary that people say, ‘Well, it must be sexy and raunchy…’” Julia notes.

‘Bridgerton’ is a rich and unique narrative that echoes the significance of communication and consent. Yes, there are many steamy scenes throughout the season. But every sexual encounter feels like a curated lesson aimed toward enlightening viewers in a realistic way on topics that are still considered taboo. Quinn’s reinvented period drama pushes against the shame that’s often associated with intimacy and female pleasure. The women of ‘Bridgerton’ are fully orchestrated beings who are formidable players in the messy romance game.

Luckily, we’ve come a long way from the days of ‘Madame Bovary,’ a frustrating tale of a woman on the pursuit of romance and passion that leads to her overdramatic downfall. Thankfully, Quinn’s period romance encourages women to harness their power of femininity and how an equal balance of partnership in a relationship is essential for sustainability.

Those who’ve already indulged in Simon and Daphne’s romance can agree that their chemistry, combined with their willingness to communicate with each other genuinely, manifests a symbiotic relationship that meets the needs of both individuals. ‘Bridgerton’ is untraditional as it is an avant-garde reimagining of our beloved period pieces. The series reflects on how the context of marriage has slightly evolved from the early years of high society and nobility.