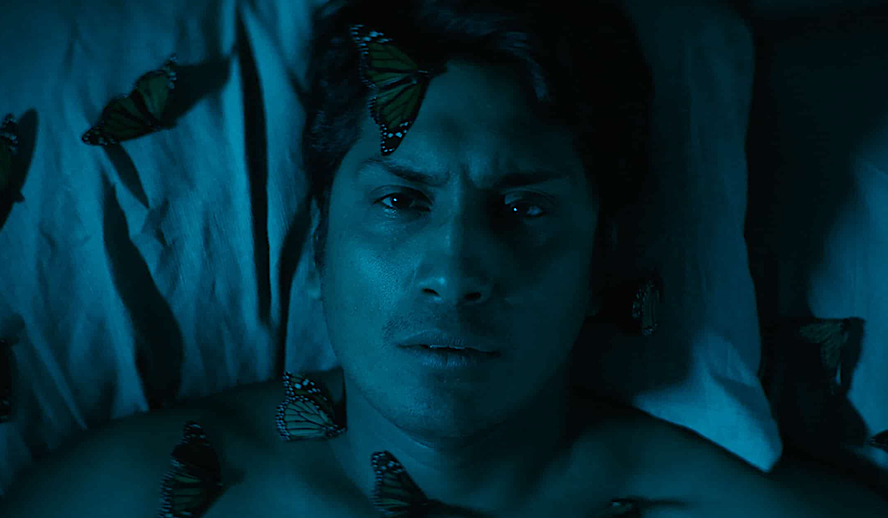 There are films that you watch for pure entertainment, and then there are films that can be defined simply as profound art. ‘Sons of Monarchs’ is an incredible work of art that transcends through the habitual concept of science, migration, and storytelling.

A Mexican biologist, Mendel (Tenoch Huerta), tries to understand the reason for the monarch butterflies’ colors. As he undertakes on a scientific journey in New York City, Mendel is forced to deal with the death of his grandmother back home in Mexico. To progress, Mendel needs to unfold the trauma from his childhood and evolve from a senseless caterpillar to a vigorous and colorful butterfly.

Childhood Trauma and the Importance of Grief

‘Son of Monarchs’ begins with several flashbacks of Mendel’s life as a child back home. His relationship with his older brother (Noé Hernández) is an important detail, as it helps with shaping Mendel’s trauma and the way he copes with it as he gets older. The grandmother (Angélica Peláez) plays a nurturing role, as she encourages the kids to take part and be curious about nature and life. The juxtaposition of these two indispensable people in Mendel’s life aids the story to move along with its narrative and further explains the heart of his struggle.

The Nature of Death and Loss of Innocence

‘Son of Monarchs’ creators decided to introduce the film with Mendel and his brother as kids. As the children establish the film’s setting to its viewer, the consideration of the nature of death and innocence rumbles through one’s mind. The relationship between the two brothers highlights how perspective plays a huge role in life. The flashbacks of their childhood often highlight each child’s different points of view when looking at the same thing. As the characters’ maturity unfolds, and you see each of their destiny, the compelling nature of their personality gives you a reason to feel empathetic towards both.

‘Son of Monarchs’ is not your typical drama, as the story is inundated with allegories and hidden messages inspired by Mexican traditions. The beauty in this film is the poetic praise towards small-town folklore. The transitions used throughout the film turn you into the scientist along with Mendel, rather than just another viewer. The director’s specific shots share the personal experience between animal and human, as we investigate along with our lead the reasons for the color of the butterflies’.

Inside the Mind of a Biologist

In just the ‘Son of Monarchs’ prologue, the film has already transported us inside a world never seen before through the screen. Right away, the film accomplishes to set up a meaningful premise and introduce you to Mendel’s fervent mind. The mind of a biologist is not an easy place to be, as we find out that he is not much different from any of us (aside from the part where he is a genius and is making extraordinary discoveries, while I sit here drinking my green tea with no idea on how to use a microscope). The key factor is to keep in mind the idea that he is human, and his grief process is rather similar to all the other non-genius out there.

The film’s bilingual nature exhibits the contrast of cultures and the daily reality of immigrant individuals. As an immigrant, you often feel out of place; as you comb through the cultural aspect, you realize the importance of understanding your identity, and Mendel’s struggle deeply deals with that. The natural way Mendel’s flounder is portrayed proves that diversity in films can be done without the forced percentages of people of color. The essence of a good story can be found no matter where you are from, without the gross stereotypes typically found in high-budget productions.

Evolution plays a vital role in this film. Tenoch Huerta, who plays Mendel, transforms along with the butterfly. Each transition between scenes has a purpose, and we understand Mendel’s sense of identity as well as recognizing his evolution through the butterfly’s anatomy. As the Monarch becomes Mendel’s alter ego, we see the real Mendel is as he processes his grandmother’s death.

The butterfly’s anatomy is used as an allegory for identity. As Mendel discovers more about the insect, he discovers more about himself. The journey in which he embarks on to process his grandmother’s death is parallel to the life of a Monarch butterfly. If you know anything about Monarch butterflies, you’ll know they are often associated with Mexican traditions, and their trajectory includes their migration from America to Mexico and vice versa. The crossing of borders, the route of a monarch butterfly, is the same as Mendel’s path home. ‘Son of Monarchs’ focuses on the meaning of migration for humans and how animals unveil how natural emigration really is.

Tenoch Huerta leads the film with a natural and beautiful sense of culture. His character is everything it needs to be without even an ounce of ingenuity behind it. In a sense, Tenoch Huerta’s approach to Mendel makes the film complete. Let’s not forget to point out that having a Mexican lead of indigenous descent like Tenoch Huerta’s is something to admire, as the story calls for an honest semblance to Mendel’s character. Again, another proof that stories like Mendel’s can be told with sincerity.

The Brilliant Mind Behind It – Alexis Gambis

The most exciting aspect of the film is the mind behind it. The brilliant French-Venezuelan filmmaker and biologist Alexis Gambis accomplishes to bring forth a perspective that is not only credible but incredibly interesting. Gambis’s ambition is to focus on what the idea of a scientist is and be able to show the human side behind the people with this profession. He often finds stories based on scientific data and transforms them into awe-inspiring art films. Gambis’s style is one that combines fiction with documentary, realism with surrealism, and the French influence behinds his films are noticeable.

‘Son of Monarchs’ – A Piece of Grand Art

It is no surprise then that the film was awarded the 2021 Alfred P. Sloan Prize. The Alfred P. Sloan Prize is typically awarded to a film that focuses on science or technology as a theme at the Sundance Film Festival every year. ‘Son of Monarchs’ was more than deserving, as the film’s artistic nature delivers an entirely original screenplay.

‘Son of Monarchs’ is a thought-provoking film that inspires us to understand migration and see grief through the eyes of evolution. It is a film that shows nature and animals as the leading example of life. ‘Son of Monarchs’ is really a poem dedicated to life, death, and everything in between.