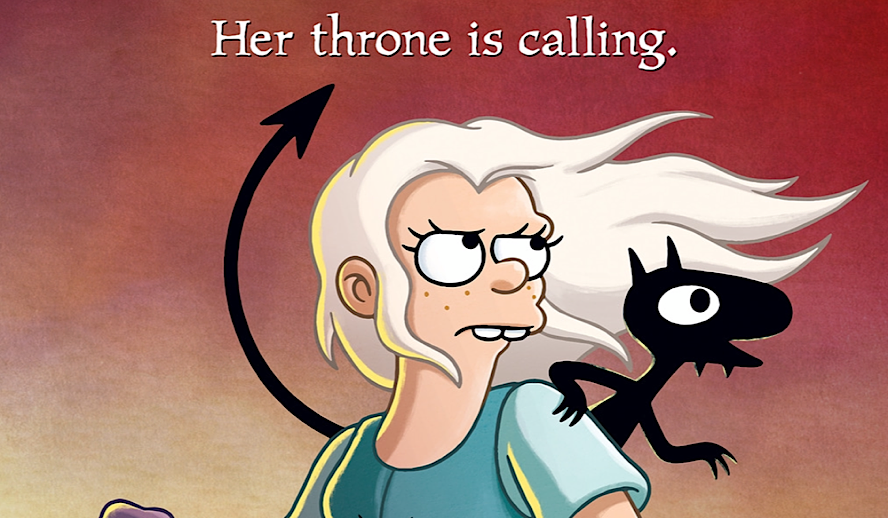 The Netflix original series ‘Disenchantment’ returned for a third season over the weekend, offering another batch of ten, 30-minute episodes. From the creators of Matt Groening (‘The Simpsons,’ ‘Futurama’) and Josh Weinstein, the Netflix animated, action-adventure comedy first premiered in 2018 to a (somewhat) positive reception—Season 1 holds a “62% Fresh” rating on Rotten Tomatoes; the series returned for Season 2 in 2019 to a warmer reception.

Suffice to say, all the elements for a truly great show are there—strong writers, talented animators, experienced actors, and laugh-out-loud funny comedians. However, despite Season 3’s dazzling visuals, strong voice acting, and occasionally moving narratives, the show continues to struggle to reach its true potential.

The show’s main character—Bean, aka Tiabeanie—continues to serve as a charming, non-traditional princess in the kingdom of Dreamland. Abbi Jacobson’s voice acting and comedic timing do a great job in bringing her character to life. Her character motivations—such as finding love, reuniting with her friends and family, and ultimately trying to save her people from ruin—translate well on screen and keep the season’s often hit-and-miss episodes from becoming too monotonous. Bean’s later subplot with a runaway mermaid—whom she quickly befriends (and more)—is one of the show’s best and most captivating plots, doing an excellent job showing Bean’s inner character and surprising vulnerability masked behind her often brash and “confident” demeanor.

Arguably even more so than Bean, Elfo turns out to be the star of the entire new season. The awkward elf’s new adventures—whether through his multiple romances, disguising himself as a member of an elite society, or being chased by angry trolls—Elfo is by far the most interesting and memorable character of Season 3. His romance with a mysterious woman at a literal freak show does a great job exploring his character’s fears and ambitions, and his later over-the-top attraction toward a ship (yes, a ship. It actually kind of makes sense though) showcases both the character’s lust for life and love as well as the show’s (occasional) triumphs at going “full weird” with the story’s narrative.

King Zog—voiced by DiMaggio—continues to be the most versatile character in the show. DiMaggio—a veteran voice actor, specifically for animated comedies—provides a lot of the show’s zany humor. It’s a shame that, toward the latter half of the season, the show suddenly decides to take his character in a very strange direction—without giving away any spoilers, let’s just say his incessant “honking” and random shrieks start to become truly aggravating, causing the viewer to more or less groan whenever the king reappears on screen. Despite Zog’s underwhelming (and honestly random) character arc throughout the season, DiMaggio’s commitment to the character does at least provide some entertainment for the show’s audience.

The show’s other lead character, Luci, unfortunately, continues to be hit and miss. While Eric Andre has an undeniably unique and hilarious voice, especially in the comedy world (just look at his truly amazing and wild performances on ‘The Eric Andre Show’), Luci, for one reason or another, just never quite finds his mark. Many of his jokes just don’t land, and his actual relationship with Bean—and overall purpose in the show—becomes less and less clear as the season progresses (wasn’t he always supposed to be by Bean’s side, and bring out the bad in her? What happened?) The writers do take his character in a different direction by the end of the season, so hopefully, there’s something more concrete—and entertaining—for Luci to do in the inevitable fourth season.

‘Disenchantment’ Just Doesn’t Know What It Wants to Be

To put it simply, the buildup from the prior two seasons—such as Bean’s relationship with her mom, and with Dreamland as a whole—gets pretty much tossed out the window for large sections of Season 3. Funny enough, Elfo at one point jokes about shows giving too much focus on events that don’t move the plot forward—a truly meta moment that the viewer can’t help but agree with. It’s as though ‘Disenchantment’ writers are aware of the show’s nearly incomprehensible plot (seriously, so many things happen that seemingly do not matter), but are, for some reason, unwilling to provide a more straightforward narrative. The biggest issue is that several events in Season 3—such as Bean’s foray into Steamland, Elfo’s forced subplot with the trolls, and Bean’s confusing relationship with her mom—either doesn’t make sense or feel half-baked. It’s disappointing—and honestly frustrating—to see a show with so much talent, rich storylines, and beautiful animation to be bogged down by a simple lack of focus. Hopefully, Season 4 will learn from prior seasons’ mistakes and evolve into the show it should have been from the start.

In addition to ‘Disenchantment,’ Abbi Jacobson’s future projects include ‘Connected’ (an animated comedy slated for 2021), and ‘A League of Their Own,’ described as a TV “comedy series about the WWII All-American Girls Professional Baseball League,” due later this year.

Eric Andre’s upcoming projects include ‘Connected’ (also starring Abbi Jacobson), and ‘Sing 2’ due to come out later this year.