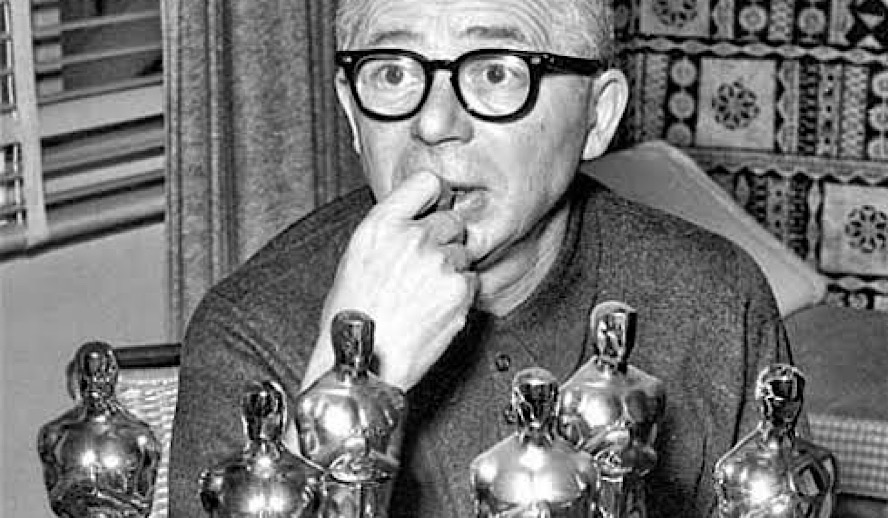 Billy Wilder once said, “The best director is the one you don’t see.” This bold statement directly contradicts the Cahiers du Cinema mentality of “camera-stylo,” whereby directors, like authors, are expected to use the camera as a pen to leave their distinctive mark and extend full creative control on each film they make. Of course, the French New Wave was a very different world from the Hollywood Studio System Wilder’s career was based in for so long. Perhaps his preference for variety in the kinds of films he made stemmed ironically from the importance he placed on writing and the way it enables vast versatility of the story. Unlike many of his other anti-auteur American contemporaries such as Sidney Lumet, (this is no way meant to belittle Lumet he is hands down one of the greats) he wrote or co-wrote all his greatest films.

Wilder was born Samuel Wilder to a Polish Jewish family in the Austro-Hungarian Empire in 1906. He worked as a journalist at a tabloid in Berlin before starting a career as a screenwriter. He wrote several German films before the rise of Adolf Hitler, after which he fled to Paris, his parents and grandmother were victims of the Holocaust. He arrived in Hollywood in 1933 and was nominated for his first Academy Award in 1939 for ‘Ninotchka’ starring Greta Garbo. He would go on to be nominated for a total of 20 Oscars, winning 5. The American Film Institute has recognized four of his films among their 100 Greatest American Films of All Timelist, ‘Sunset Boulevard’ ‘Some Like it Hot’ ‘Double Indemnity’, and ‘The Apartment’.

Even if he believed he was invisible, Wilder does have a few trademarks, the chief of which being great scripts that succeed completely in each of their goals. Other recurring elements to his greatest films are all-star casts and humorous dialogue. His magic touch was that his films find an impeccable balance between a character piece and a genre piece. Here’s a look back at some of his greatest films in each genre that expose just how versatile and brilliant he was.

1959’s ‘Some Like it Hot’ is currently number 1 on the AFI’s top 100 comedies list. The story of two musicians who disguise themselves as women to escape from gangsters they witnessed commit a crime combines physical humor with Wilder’s exceptional comedic dialogue sure to satisfy anyone looking for a laugh. Tony Curtis, Jack Lemmon, and Marilyn Monroe are all perfect in their roles, and the last words, “Nobody’s Perfect” are embossed on Wilder’s tombstone. The full headstone reads “I’m a Writer But Then Nobody’s Perfect.” This wasn’t Wilder’s first collaboration with Monroe however, he directed her in ‘The Seven Year Itch’, a satirical exploration of the male gaze and infidelity. For better or worse, it’s Monroe’s most iconic role; the white dress flurrying over the subway vent has been forever immortalized in statues, murals, and fake Marilyn’s tourists pose to take pictures with.

It seems strange that the man who made ‘The Seven Year Itch’ is the father of many Film Noir conventions. It all started with ‘Double Indemnity’ in 1944, which saw the first use of Venetian blind lighting, and whose Los Angeles setting and use of voice-over narration became standard in the genre. The fantastic sensual dialogue and teetering moral compass caused Wilder some problems with the Hayes Code. His most famous noir, ‘Sunset Boulevard’ is perhaps the greatest film about fame ever. It’s a film in which he turned his mediations on the role of the screenwriter into a deeply emotional thriller, whose protagonist is narrating from beyond the grave as only a writer would do. A cross between a noir and a courtroom drama, Wilder’s adaptation for ‘Witness for the Prosecution’ takes the suspense from a noir and places in the unlikely setting of a courtroom. His use of classic femme fatale Marlene Dietrich in the lead seems also an ode to the genre. All three of these films include elements of humor, but never to the detriment of the thrill.

If there was ever a film that best-defined Wilder as an artist, ‘The Apartment’ is it.

It’s a stepping stone many claim as their favorite film in the early stages of cinephilia and for some, it doesn’t change. A pioneer in the genre of dramedy and romantic comedy, it is at once hilarious and also layered, exposing so much about what corporate America was like through the eyes of two heartsick employees at a company of 30,000 plus. The lovable and flawed characters created by Wilder’s script and portrayed by Jack Lemmon and Shirley MacLaine make the tonal shifts possible as they deal with issues about self-worth and find love in the process. Another great romantic comedy is ‘Sabrina’, a wonderful, never-corny fairy tale starring Audrey Hepburn, Humphrey Bogart, and William Holden. The now-classic romantic comedy plot devices of characters falling in and out of love, falling for the wrong person, and running to profess their love before it’s too late have all been overkilled by so many, but work brilliantly in ‘Sabrina.’ Special shout-out to Edith Head’s amazing Oscar-winning costume design, another aspect that makes this film so memorable.

Two other brilliant Wilder films that should definitely be noted but are a little harder to place into any of his regular genres are ‘The Lost Weekend,’ a character drama with noir elements about an alcoholic’s weekend binge, and ‘Stalag 17’, another great exploration into the dramedy space that takes place in a German POW camp. While it’s hard to 100% agree with Wilder that a director should be invisible, looking at the sheer volume of his iconic and important filmography makes it impossible to not recognize that this philosophy worked for him. He was a filmmaker who put story at the center, and by doing so was able to adjust himself as story demanded, staying true to his sensibilities of humor and damn good dialogue.