The Billboard Women in Music Awards: A Night of Women and Men Celebrating Music & ‘Woman Power’ 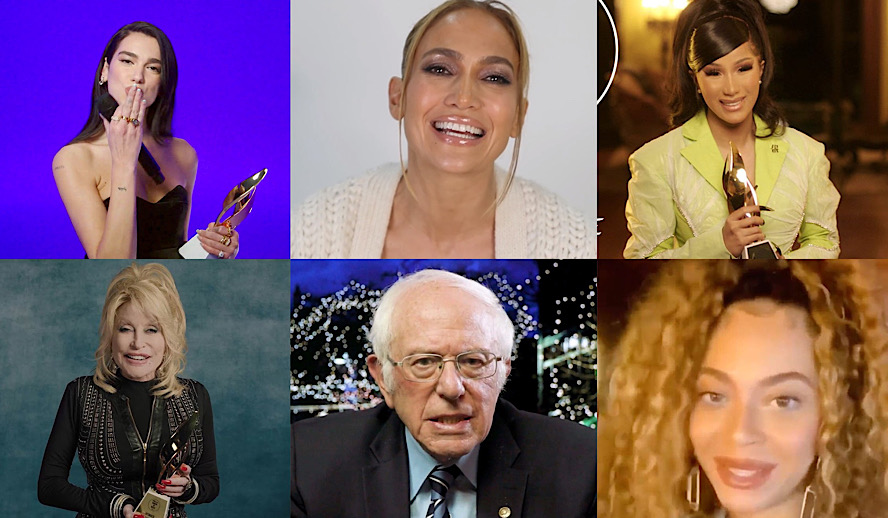 This year’s Billboard Women in Music Awards celebrated the accomplishments of female artists, while also delving into a conversation of what it is really like to be a woman in the music industry. Hosted by Teyana Taylor, the virtual awards ceremony took place on December 10 and awarded today’s top women in music, including Cardi B and Dua Lipa.

“Tonight’s honorees helped us look through the darkness and find the light,” Taylor said in her introductory remarks. “Their music inspired our Zoom dance parties, they used their platforms to fight a global pandemic, to fight for equality and encourage voters to make their voices heard … While the world was in lockdown, these women were standing up, doing what women do best: getting to the work and getting to the money.”

The event not only highlighted a slew of fantastic singers, several of whom performed their latest and greatest hits but additionally acknowledged the complicated world that is being a female artist in a competitive and still very much male-dominated industry.

Dua Lipa kicked off the night by singing “Boys will be Boys” from her recent album “Future Nostalgia”, a song that discusses how “boys will be boys, but girls will be women,” speaking to the double standard and expectations that society has of women and how men’s actions are often are given a pass for their actions because it’s in their nature and they are just “going to be boys”. Senator Bernie Sanders emphasized the power of her activism in his speech while virtually presenting her with the Powerhouse Award.

“She has said loudly and clearly, with her actions, that now is the time to fight for a better future for all,” Sen. Sanders said. “She’s fighting for young people, women, refugees, the LGBTQ community. She’s using her platform to bring people into the democratic process. She’s raising her voice to demand real change.”

Sanders additionally recalled his previous Zoom call with the singer, saying that through their prior conversation it was clear to him that “she knows the rules have to change, and that it is time for ‘new rules’ to create a world that works for all of us and not just the very wealthy” – alluding to the name of her first top 10 Billboard Hot 100 song, “New Rules.”

Colombian singer Maluma later presented Jennifer Lopez with the Icon Award, where Lopez became emotional as she recalled her earliest memories of her “first love” — music.

“My mom used to put me on the kitchen table and there’s where she showed me how to do the booty shake and together, we’d sing the oldies or whatever was on top of the Billboard charts at the time,” she said. “Those were my first performances.”

Beyoncé then graced the ceremony with a recorded video message for Chloe x Halle, who were presented with the Rising Star award.

“Ladies, I am so, so proud of you,” she said. “You’ve done this with authenticity, with grace, with raw talent. And you managed to shine in every room you enter. And I’ll always love you.” The duo, who are also a part of Beyoncé’s Parkwood Entertainment, performed their song “Baby Girl” off their recent album “Ungodly Hour,” which earned them a Grammy nod for best progressive R&B album in this past Grammy Awards ceremony.

Miley Cyrus later presented country music icon Dolly Parton with the Hitmaker award, discussing the 74-year-old’s achievements throughout her time in the music industry and how she has inspired and impacted other female musicians.

“Dolly has paved the way for other women songwriters, encouraging them to take ownership and get the credit that they deserve — an issue many women in the songwriting industry still struggle with today,” Cyrus said. “When Elvis sought to record Dolly’s ‘I Will Always Love You,’ Dolly famously said no, keeping control of her song that Elvis wanted half of the publishing royalties to. Slay all day, Dolly.”

Parton went on to perform her song “9 to 5,” which was a No. 1 hit and received an Academy Award nomination and four Grammy Award nominations, winning her the two categories of “Best Country Song” and “Best Country Vocal Performance, Female” in 1981. Before her performance, however, she also added to Cyrus’ sentiments, emphasizing the importance of female artists taking ownership of their own work and naming some who have made names for themselves in doing so.

“I’d like to acknowledge a few — some of them older kind of back in my day. Cindy Walker, who wrote some of the greatest songs ever, and of course Loretta Lynn, wonderful wonderful songwriter. And this day in time, of course, Taylor Swift, she’s just right up there, probably number one. And of course, Brandi Carlile, there’s just so many,” Parton said. “I think it’s so important that we acknowledge the women that write and sing in country music. And I think it’s also very important that they take control of their own business.”

Singer-songwriter Jessie Reyez additionally touched on the difficulties of being a woman in music, in her acceptance speech for the American Express Impact Award.

“I’ve always said that being born a woman on this Earth is very much like being born walking uphill,” Reyez said. “There are so many burdens and bags that we carry yet manage to do so with grace.” The singer also called out gender inequalities and double standards, citing how women who celebrate their accomplishments are deemed cocky, while men are credited as leaders.

“Today, I’m grateful and f*cking proud,” Reyez said. “Billboard Women in Music, thank you for recognizing my uphill walk as a young woman.”

Billboard Woman of the Year 2020

Cardi B was additionally awarded the coveted title of Billboard Woman of the Year, which was presented to her by Breonna Taylor’s mother, who thanked her for her efforts in spreading awareness about what happened to Breonna and using her platform to reaffirm that Black women’s lives matter, calling her “one of Breonna’s most outspoken advocates for justice over the last nine months.”

In her speech, Cardi graciously discussed her collaboration with Megan Thee Stallion, “WAP,” a song that was praised as a female empowerment anthem by many but garnered controversy for its explicit lyrics among others, even as it debuted at No. 1 on Billboard’s Hot 100 chart with a record-breaking 93 million US streams.

“Not only was it an amazing song that broke so many records, but it was a conversation that I never thought was going to be so big,” she said. “I mean, it pissed off a whole bunch of Republicans for no reason, you know what I’m saying? It was just weird.”

“WAP” also marked the first women rap collaboration in history to debut at No. 1 on the Billboard charts, so the award was much deserved by a top female artist who is continuing to break ground in music.

Cardi additionally reflected on her career thus far, expressing how she has evolved throughout the years and offering words of advice to other aspiring professionals.

Related article: A Tribute to Hugh Jackman: His Rise and Journey from Theater to Superhero

Her message rings true for many others and serves as an inspiration for other women looking to make it to the top in a society that, as Reyez said, seems insistent on making the journey an uphill battle. However, the success of these women who were honored during the ceremony only shows how important it is for them to use their power to push through adversity and to continue to break the seemingly endless glass ceilings in the industry because in doing so, they will inspire generations of both female artists and women in any industries to do the same.