‘Fairfax’: An Animated West-Coast Sitcom for the Chronically Online 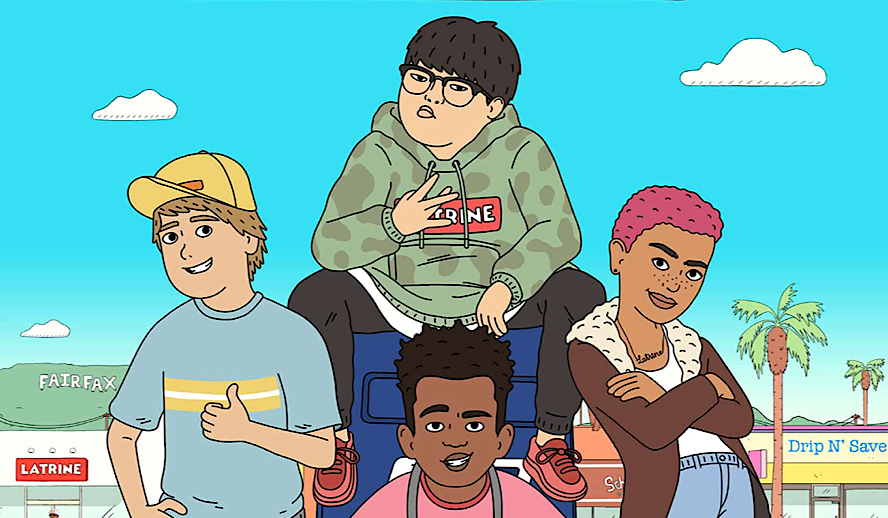 Fairfax Avenue and the Never-Ending Pursuit of Clout

‘Fairfax’, the new Cali-based Amazon Prime series voice-starring Jaboukie Young-White, Skyler Gisondo, Kiersey Clemons, and Peter S. Kim, is another animated exercise in a modern commentary. When our fish-out-of-water character, seventh-grader Dale (voiced by Gisondo) moves from Oregon to California in a town near the coveted Fairfax Avenue, he’s almost instantly integrated into an eccentric group of middle-school hypebeasts bonded together by their shared snark and acute social awareness to boot. ‘Fairfax’ immerses us into a world – obviously, ironically much like our own – that prioritizes influence and clout above all else.

It vibrates with all of your favorite (and least favorite) buzzwords and references – ‘normie’, ‘Chad’, ‘canceling’ and as many stand-ins for famous brands as you can imagine (the first episode focuses on the latest ‘Latrine’ t-shirt drop, an obvious nod towards ‘Supreme’). This is where the series chooses to rest its hat: on the cutting edge of the most easily referential elements of pop culture. Through wholehearted indulgence rather than the meaningful nuance of satire, ‘Fairfax’ is ineffective in saying anything that isn’t already being said by the groups from which they are trying to reap this irony. To say that the overarching superficiality is on purpose is a little too generous for me.

The animation is as rich as the trend-obsessed world it attempts to satirize, often more intriguing than the written jokes and punchlines. It recreates an independent, juvenile vibrancy like other popular animated series of recent years such as ‘Big Mouth’, integrating realistic elements and perspectives for a visually pleasing experience. As a result, the visuals soar over the plot and storyline, and while I thought that the narrative actually hit a stride around the middle, it quickly devolved into an uninspiring final half of the series thus far. ‘Fairfax’ would greatly benefit from attention to emotional detail, to crafting a substantial bond between viewers and the main cast of characters, but it chooses the easy route by leaving them mostly featureless and ready for any random situation that suits the writers’ ideas.

Both the endless pop culture references and the cameos from their animated representations – for example, Joaquin Phoenix and Dr. Phil each make an appearance by the first episode – come off as more gimmicky than analytical or irreverent after a short period. Attempting to ride the thin line between silliness and the oh-so cleverness of social commentaries, ‘Fairfax’ ultimately feels shallow, jumping from set-up to punchline without much care for the thoughts or ideas of the characters themselves. It’s cheap, it’s overdone in our current zeitgeist, and it seems half-assed.

At the center of ‘Fairfax’ is a theme of somewhat unbearable self-awareness akin to the chronically online teens of today, but it doesn’t take a Cinematic analysis to see that ‘Fairfax’ is meant to be a satire over the fickleness of consumerism, hype culture, and the reputation-based values that permeate the morals of younger generations. While fixated on these crowning concerns of this cartoonish West Coast culture, this focus withers beneath the pressure of the sitcom format and succumbs to a case of narrative laziness.

Kiersey Clemons’ character, Derika, who is introduced during an ironic nut milk protest at Whole Foods (stop milking almonds!) and who we also see jamming to the anti-environmentalist rhetoric of the in-universe rapper ‘Yung Polluter’ whilst cleaning litter out the L.A. river on another occasion, seems like the best representative of the satirical themes we’re supposed to be laughing at. More than that, she best represents the banal culmination of hyper-awareness that this show pokes fun at but ultimately succumbs to due to a lack of other entertaining qualities. Don’t misunderstand me; I didn’t dislike ‘Fairfax’ because of ‘wokeness’ or ‘awareness’, I dislike it because of pointless wokeness/awareness, readily deployed but wholly inconsequential. Things aren’t funny just because they exist, just like Derika isn’t funny just because she’s ironic.

All in all, ‘Fairfax’ feels written by a collection of people who really love Twitter. The series could be ripe for the uber-aware, meta-comedy of ‘South Park’, or it could even err into the warm, familial sarcasm of ‘Bob’s Burgers’, but it seems to fizzle out in a flurry of garish imagery and slang. The commentary feels too on-the-nose, merely indulging in hot-button social topics, often relying on the reference itself as the ‘joke’. I have this sneaking feeling that maybe ‘Fairfax’ just isn’t my style, maybe I’m too under-evolved to appreciate this brand of referential humor, or maybe I’m just too Gen Z to see what makes it so hilarious, but I have to say, this series left much to be desired by way of both comedy and commentary.

The merit of a series should not be judged by whether it effectively emulates the ‘vibe’ of other successful series, of course, but their individual effectiveness can certainly be compared. There’s not much substance in the intrinsically vapid core of ‘Fairfax’. It’s not that it is too over the top, or too politically correct, or too pop-culture savvy, rather, it just effectively reappropriates the satisfaction of easy recognizability and trends (that is supposed to be satirizing) through these myriad meaningless references and constant nods to reality. For me, ‘Fairfax’ tried so hard to be so acutely aware and ironic that it actually just became cringe.

Fans of the main actors can look forward to seeing them in numerous upcoming films. Skyler Gisondo is set to star in Paul Thomas Anderson’s newest project, ‘Licorice Pizza’, which premieres in late November. Jaboukie Young-White is set to star in a currently untitled, pre-production stage Bo Burnham project alongside Danielle Macdonald. Kiersey Clemons has a number of upcoming features, with the most recently completed being a TV movie titled ‘Red Bird Lane’ that is set to release this year. Finally, our fourth star Peter S. Kim will appear in the drama film, ‘Dealing with Dad’, which is currently in post-production.