The 65th Anniversary of ‘12 Angry Men’: Innocent Until Proven Guilty 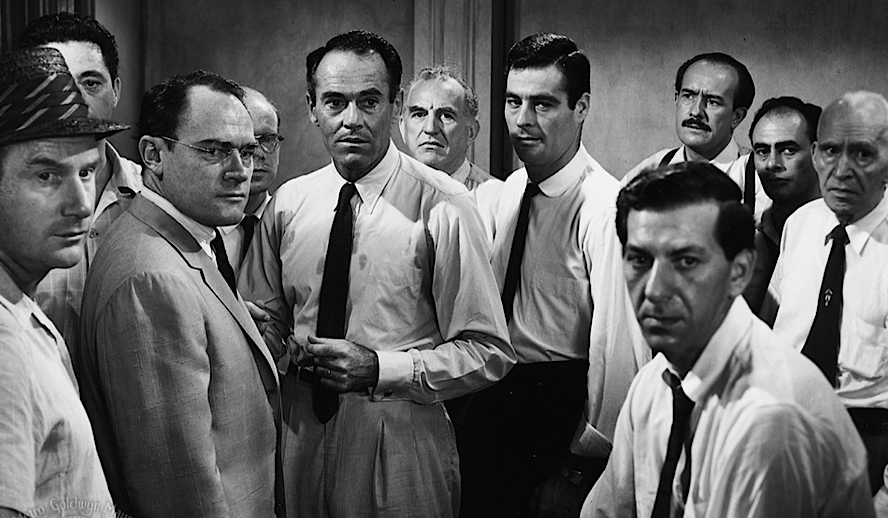 The 1950s was an era of impactful storytelling, from the animated release of Disney’s ‘Cinderella’ to Hitchcock’s ‘Vertigo’, it was a decade of classic Cinema. ‘12 Angry Men’ being amongst those classics, was released in 1957 and became an American staple that moved an audience. Whether you are a film student or just a devoted cinephile, ‘12 Angry Men’ has become one of the most awe-inspiring movies with its critique of the justice system and American society. The story went through different adaptations before it was turned into the movie we know of today. It was written originally for a television play by Reginald Rose in 1954 but was then adapted into a stage play the next year. It was in 1957 when Rose created the screenplay alongside director Sidney Lumet for the movie adaptation. This film was Lumet’s directorial debut and he was set out to direct the most iconic movies following the success of the film.

As 65 years have gone by since the release of ‘12 Angry Men’, the overall story has withstood the test of time. Its influence on Cinema is a testament to the celebration of this iconic movie. By looking back on the story and exploring the powerful writing, it will give reason to why this film has continued to stay relevant to this day.

Simplicity At Its Finest: A Look Back On The Classic

With the plethora of courtroom dramas, the take on the judiciary system with the sole focus on the jurors is a diverse perspective on this particular genre. To give the film a brief overlook, the story centers around the murder trial of a boy who supposedly killed his father. Following the trial, 12 jurors are put in a room to determine his fate as a guilty verdict may lead him to the electric chair.  The jurors, who are all unnamed and go by their juror number, must make a unanimous decision of whether or not he is guilty or not guilty. As they all had the same outlook in sending the boy to prison at the beginning of the movie, it was Juror #8 (Henry Fonda) who had an opposing view from the 11 other jurors. Juror #8 argued for the boy’s freedom and reasoned to the rest of the jury about the boy’s possible innocence.

His persistence was the driving force of the film that led all the men to slowly examine their responsibilities as jurors and to understand the weight of their decisions. The film in itself is simple. It may not have the romance or flashy action scenes that were prevalent in the movies during the 50s. One can also argue that its “lack of flare” is why the film did not have the most successful box office. Yet despite the simple storytelling, the film was a cultural hit.

There are several factors that make this movie so special. One of them being how Lumet utilizes such a small space in order to make a big impact. The 12 jurors are confined to one New York jury room for the entire 95 minutes of the film. There is only so much one can do with such little room, but Lumet uses the limited space to his advantage. We see a variety of angles and vantage points of the conversation in order to symbolize the back and forth arguments between the group of men. Due to the movie being in one setting, the story heavily relies on the dialogue and characters to progress the film. With the impressive ensemble of talented actors, they become the driving force that makes the story engaging and immersive.

Although Henry Fonda is the main lead of the film, the performance of the entire cast together is influential in itself. Actors such as E.G. Marshall (Juror #4), Lee J. Cobb (Juror #3), Martin Balsam (Juror #1), and many more, were the fellow big names who delivered such moving performances. Each character had a significant role, whether one got more lines than the other, each juror held such weight for the determination of the boy’s verdict.

Beyond The Surface Level: Emotion vs. Logic

At its core, the examination of the justice system is what made ‘12 Angry Men’ a staple film in the studies of law and society today. It openly recognizes the racial bias within the American system and calls out the process as it is designed to blindly put people of color in prison without determining their innocence. Although the race and class of the defendant are not explicitly said in the movie, it is implied throughout the arguments made by the jurors who found the boy to be guilty. The entire movie focuses on privileged white men determining the life or death of a young boy and they choose to say he is guilty because it is the most convenient for them. They are blinded by their preconceived notions of people of color and lower class individuals that it prompts them to make a decision without actual logic.

With the story’s battle between emotions and reason, its realism is what makes the film a vital commentary on this prevalent issue. Juror #8 going against the herd is motivated by his reasonable doubt. He never outrightly claims that he believes the boy is truly innocent, he just looks at the possibility that he can be found not guilty. It brings an emphasis on the ‘innocent until proven guilty’ principle that is rooted within the American constitution. He is a reflection and symbol of standing up for your beliefs without falling into the actions of the mob mentality. Not swayed by instincts, Fonda’s character is the needed piece of social consciousness that sees fact for what it is.

65 years later and the film continues to be relevant today. It’s disturbing and frustrating that not much has changed from a 1957 movie as we have seen instances of innocent people of color getting wrongly accused of crimes without a fair trial. This movie has continued to serve as a constant reminder of the lack of proper justice and the examination of the current legal system. We have a civic and moral responsibility that this movie recognized 65 years ago and we should continue to uphold the values and duties that it portrays.

‘12 Angry Men’ studies humanity in its most vulnerable state as it leads us to examine the self-preservation of human instinct. In its mundaneness, the film recognizes how judgment is a defense mechanism for those who are most vulnerable, essentially scrutinizing race and class status. With the beauty of Rose’s storytelling, Lumet’s stylistic direction, and the talented performances of the group of actors, their creative performances remind us of the need to stand up and remain grounded during challenging times. To quote Juror #8: “Prejudice always obscures the truth.”