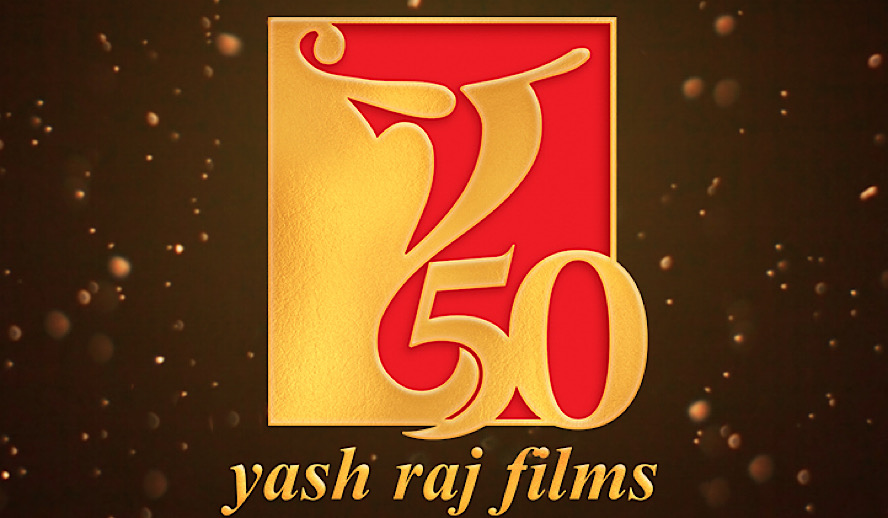 On the 50th anniversary of Yash Raj Films, commonly referred to as YRF, producer, writer, and director, Aditya Chopra honored the legacy of the Indian film studio and the founder of it – his father Yash Chopra. In a heartfelt and sincere letter, Chopra expresses his profound respect for his father, and the bold steps he took to form his production company, Yash Raj Films. Over the past 50 years, YRF has made a name for itself in the global film industry and has established itself as a landmark in Bollywood cinema, producing almost 80 films as of 2020 including several noteworthy entries such as Daag: A Poem of Love (1973), Mohabbatein (2000) with Amitabh Bachchan, Shah Rukh Khan and Aishwarya Rai Bachchan, and Dil To Pagal Hai (1997) with Shah Rukh Khan and Madhuri Dixit. September 27th marks the day of both YRF’s founding as well as Yash Chopra’s own birthday, making Aditya’s message all the more salient and resonant. The letter begins recalling Yash Chopra’s courageous decision to create his own independent studio 50 years ago. “In 1970, my father Yash Chopra, left the security and comfort of his brother Mr. BR Chopra and formed his own company… He did not know how to run a business and did not even have the basic knowledge of what goes into making a company. All he had was a strong belief in his talent and hardwork and a dream to be self-reliant.”

It is apparent that Aditya Chopra finds enormous pride in his father’s leap of faith and greatly values the commitment artists put into making their dreams a reality. Of course, Yash Chopra was ultimately extremely successful in realizing his dream as Aditya highlights, “My father didn’t know then, that the small company that he started in a tiny room, would one day become one of the the biggest film studios of the Indian Film Industry.”

Related article: Must Watch – ‘Super Deluxe’: An Oscar-Worthy Foreign Film With A Powerful Message from the Tamil Film Industry in India

Yash Raj Films – A Business Between Father and Son

Chopra continues his letter, now shifting focus to the bond between himself and his father as they developed a business relationship. As a filmmaker himself, Aditya worked closely with his father, beginning with the release of Chopra’s film Dilwale Dulhania Le Jayenge (1995) with Shah Rukh Khan and Kajol. Aditya shares the experience of premiering his first film and how it impacted the rest of his career, along with the trajectory of Yash Raj Films. “The historic success of [Dilwale Dulhania Le Jayenge] gave me confidence to give wings to some crazy risky ideas that I had for the future of YRF. Besides the immense love that my father had for me,  he now also had a lot of faith in my ideas because of the miraculous success of my film.”

Aditya then goes on to share how he was able to utilize his father’s newfound trust in him as a partner in business to maintain Yash Raj Films’s independence, in addition to expanding its relevance. “I had foreseen the advent of international corporate studios coming to India and taking over our business. I wanted us to achieve a certain scale, so that we could retain our independence… My father contradicted his own conservative mindset and bravely indulged in all my bold initiatives. And in a span of 10 quick years, we went from a film production house to India’s first fully integrated independent film studio.” 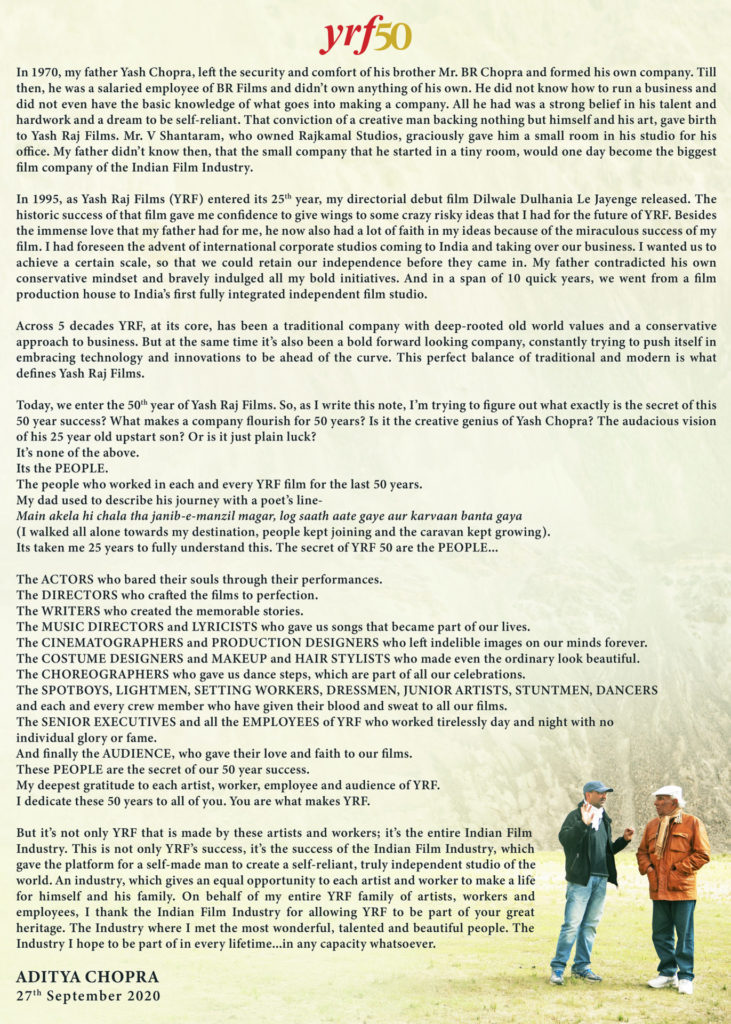 This meshing of ideology between father and son is what Aditya attributes to the longstanding success of Yash Raj Films as he claims the unity of conservative and progressive values remains central to YRF’s principles. “Across 5 decades YRF, at its core, has been a traditional company with deep-rooted old world values and a conservative approach to business. But at the same time it’s also been a bold forward looking company, constantly trying to push itself in embracing technology and innovations to be ahead of the curve. This perfect balance of traditional and modern is what defines Yash Raj Films.”

Although the great Yash Chopra had passed away in 2012, it is evident that the values he and his son shared remain a pillar of what has kept Yash Raj Films an inadmissible giant in Indian cinema for the past 50 years.

The People Of Yash Raj Films

Aditya Chopra dedicates the majority of this letter to his father and the impact he left on Yash Raj Films, and for good reason; however, Chopra employs the latter half of his message to address what he refers to as the “secret of YRF” – the people. As he attempted to gain a better understanding of what made Yash Raj Films such an exceptional success, Chopra explains how it took him some time to reach a revelation. After first considering whether it was the talent of his father, his own vision, or simply luck that contributed to YRF’s 50 years of achievement, Chopra ultimately came to the epiphany that it was indeed the people that held the key to the prosperity of Yash Raj Films.

Aditya Chopra explains, “It’s the PEOPLE. The people who worked in each and every YRF film for the last 50 years. My dad used to describe his journey with a poet’s line- Main akela hi chala tha janib-e-manzil magar, log saath aate gaye aur karvaan banta gaya (I walked all alone towards my destination, people kept joining and the caravan kept growing). It’s taken me 25 years to fully understand this. The secret of YRF 50 are the PEOPLE.”

Although it is clear that Aditya has great respect for his father’s decision to follow his dreams independently, it is Aditya’s comprehension of his father’s choice quote that allowed him to see how Yash Chopra found tremendous value in those that built YRF with him. Aditya continues to specifically address the people that he finds to be so crucial to Yash Raj Films, from “The actors who bared their souls through their performances” and “The directors who crafted the films to perfection” to “the audience who gave their love and faith” to YRF’s films.

Chopra makes it clear that everyone involved in the production and consumption of their films are the common denominator of what keeps Yash Raj Films the outstanding monument in the film industry it is today. Finally, Chopra takes a moment to appreciate the magnificence of the Indian Film Industry “which gave the platform for a self-made man to create a self-reliant, truly independent studio of the world.” Yash Chopra has left a remarkable legacy that both Aditya Chopra and YRF fulfill in the films they have shared for the past 50 years, and surely will continue to share for the next 50 years to come.