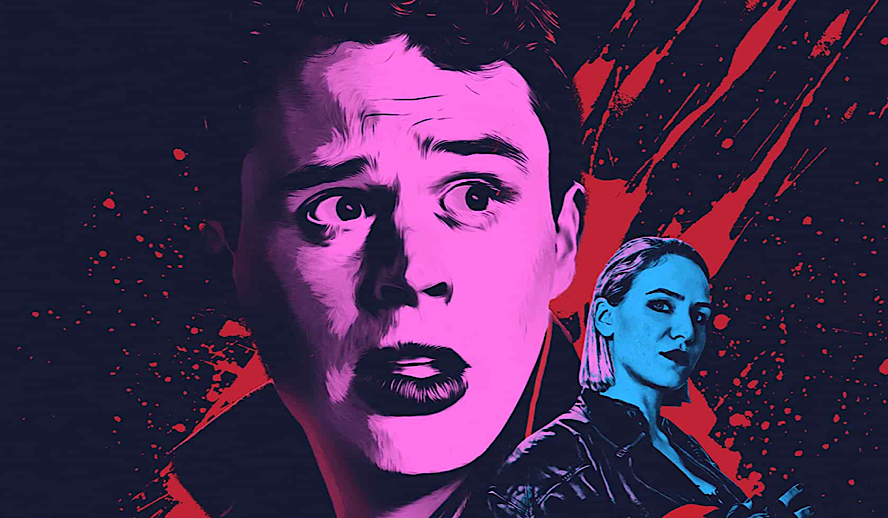 Released digitally on April 5th, 2022, this 2020 horror-comedy is a new take on parody film. There is no doubt that this movie can’t be taken seriously, though the real question is – is it supposed to? There are certain aspects of this film that warrant a certain level of respect, such as the luminescent and eye-catching cinematography. However, when it comes to the writing, character building, and acting; you might find yourself asking – is this supposed to be funny?

Joel (portrayed by Evan Marsh) is a nerdy 20 something-year-old writer for a horror magazine – Vicious Fanatics. His main character development revolves around his crush on his roommate Sarah (portrayed by Alexa Steele), who quite frankly could not be less interested in him. One night, Sarah goes out with a new guy, and being the creep that he is – Joel hops into a cab and follows this man after he drops Sarah off. This “chase” leads him to a restaurant and bar where he proceeds to get drunk and pass out in a broom closet. Upon waking up, Joel discovers that he has landed himself in on some sort of secret meeting. As the people in the circle start talking, he realizes that he just crashed a support group for serial killers! And to make matters worse, Sarah’s new boy toy is one of them!

As Joel is discovered, chaos ensues and we get a glimpse at the parody aspect of this film. Turns out, each of the people in the circle is meant to parody a horror icon. The character of Hideo (Sean Baek) reflects Hannibal Lecter, Mike (Robert Maillet) is evidently meant to be Michael Myers, Fitz (Julian Richings) the clown is a psychopathic Joker, and Bob (Ari Millen) – dressed in his splatter proof suit – is a miserable copy of Patrick Bateman.

Finding an unlikely ally and barely escaping with his life, Joel and his new friend set off on a journey to right the wrongs of the world…and fail. This leads us to a conversation between Joel and his friend, during which he is told – “you might want to reexamine you”. This, of course, talks about his obsession with Sarah that landed him in this situation in the first place. Joel agrees, saying that he does in fact need to change if his life is to improve. This is the film’s interesting attempt at assigning morals to something that is supposed to function as bloody laughs. And admittedly, this scene sticks out like a sore thumb. So what is the deal with all of this?

One thing you’ll notice as you watch is – this movie doesn’t know what it wants to be. From one angle it’s a pretty decent slasher, from another it’s a questionable romance, if considering the plot lines that don’t lead anywhere then it’s a revenge mystery, and if you know where to look then it might also earn a few laughs. This is the biggest issue with the movie. It’s directionless – as though it was written without any sort of plan or outline. Or perhaps there was too much that the writers wanted to fit into the plot. Something like this can actually be a valuable lesson to aspiring filmmakers. So the actual truth that this film teaches is – pick a struggle.

To answer the question of whether or not this film is worth an hour and forty-three minutes of your time simply – no, it isn’t. The comedic value is grossly misaligned with what the movie wants you to think of it, the acting is flashy in all the inappropriate places, the writing doesn’t really lead anywhere, and the overall atmosphere leaves you questioning what you just watched. So right around this time, you’re probably asking – so what’s the complicated answer? Well, there are things about this movie that are actually very well done. For example, the special effects makeup and other visual effects are better than in a lot of the higher budget productions that have been released recently.

There is a lot of comedic value in the parody factor of this movie and it could have actually been fantastic if they simply leaned more heavily into that aspect. The use of LED lighting is not at all tacky or in-your-face, it’s perfectly atmospheric – as it should be. This movie is aesthetically pleasing and cohesive, it does a good job at selective but intense gore, and you could actually get attached to some of the characters because of how distinct their character profiles are. This would be a fun movie to watch after a couple of glasses of wine, when you can’t judge the actual composition and storytelling.

‘Vicious Fun’ is not a movie you recommend to a friend when they ask you for a horror-comedy. Instead, it’s a movie you sit and laugh at. Whether because it can actually be quite funny, or because it’s so hectic that you’ve lost all hope at keeping track of the story and have elected to just take it at face value. This is the kind of movie you can’t think too much about. You watch it once, maybe you laugh, maybe you appreciate the aesthetics or the special effects makeup – and then you forget about it.

But every once in a while you find yourself thinking about a really well-lit scene or a joke that made you cackle and you wonder – where are those scenes from? Sure you forget the characters’ names, what they look like, what they sound like. That happens with most media. But you do think back on what you watched once in a while – remembering nothing about it – and you think of it being much better than it really was. Despite the fact that there isn’t a whole lot in this movie that’s done well, but the things that are, truly stick with you. So watch it if you want, or don’t!