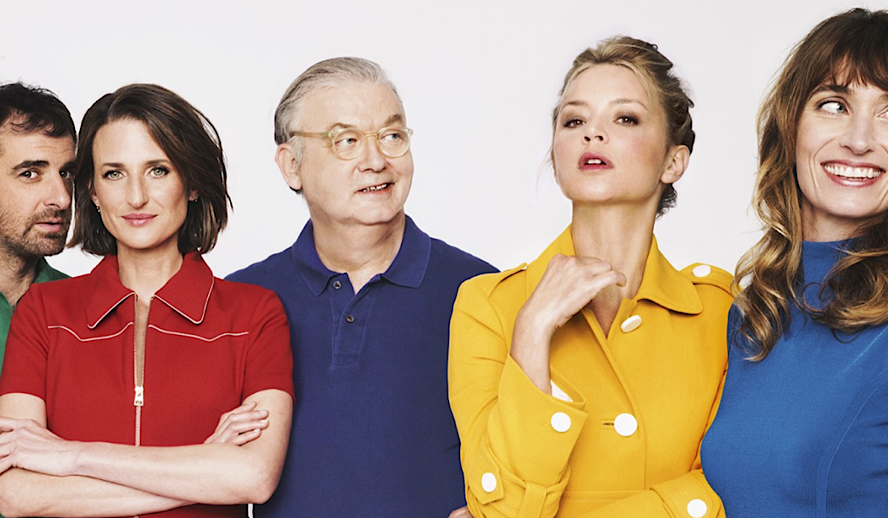 While accepting the Golden Globe for Best Foreign Language Film for ‘Parasite’, Bong Joon-Ho said, “Once you overcome the one-inch-tall barrier of subtitles, you will be introduced to so many more amazing films.”

When a person steps outside their comfort zone, especially relating to their native language, the opportunities for beautiful storytelling become endless. This holds true with the French show ‘Call My Agent’. The workplace dramedy centers around a talent agency in Paris and the lives of the employees. The four agents, Andrea, Gabriel, Matthias, and Arlette, must navigate tricky situations in entertainment as well as their personal lives. When Matthias’s illegitimate daughter, Camille, shows up in Paris, seeking both a relationship as well as her desire to work in the movies, he is desperate to keep her away from him. However, as fate will have it, she ends up in the same elevator as Andrea and wins her over. She becomes her assistant in the office next to her Matthias. Camille does not want the other workers thinking she got the job because of nepotism, and he does not want his wife and son to know that he has another family, so the two agree to keep it a secret.

‘Call My Agent!’ – A Love Letter To The Entertainment Industry

What makes it different from other workplace-centered shows is the job itself. The agents work behind the scenes to get movies and television made. It’s a love letter to the entertainment industry and the chaotic aspects that often go unnoticed when viewing the final product. It explores the very personal relationships between actors and their agents, who depend on each other. ‘Call My Agent!’ masterfully entertains the general public while still incorporating obscure references for the cinephiles watching. Every episode is centered around a new crisis with the talent, in which real french actors play fictional versions of themselves. In the pilot episode, Cecil de France tells a magazine that she is excited for her upcoming role in a Quentin Tarantino movie, when Gabriel gets a message revealing she didn’t actually get the part because of her age.

Gabriel must manage his client, the story, and figure out how to keep everyone happy. Camille Cottin, Andrea in the show, said in an interview with The Guardian, “It’s not at all a French tradition. We tend to think of ourselves as artists, and self-mockery or self-parody is not something that sits naturally with us. However, when they read the scripts and understood that the tone was ironic and tender, joyful and optimistic, they loved it.” It pokes fun at the industry itself and how ludicrous the work can be at times, but in a way that lets the audience in on the joke. These people love their jobs and would not want to be doing anything else. The people who work at Agence Samuel Kerr, or A.S.K., are smart even in times of crisis, competitive, and devoted to their livelihood according to Alexandra Schwartz her The New Yorker review from 2018. “They love what they do, and they revere the cinema. That, and the fact that business and pleasure mix very freely, is how you know that the show is French.”

The idea was born from Dominique Besnehard, a famous Artmedia talent agent who worked with stars like Nathalie Baye and Juliette Binoche, who both guest-starred on the show. He thought that he had enough stories from his work to make a dramatic comedy, and after eight years, and with the help of showrunner Fanny Herrero, he was right. “There is the glamour and the stars but then there are the assistants working behind the scenes, the workers in the kitchen so to speak,” said Besnehard.

Vacation To Paris Without The Eight Hour Flight

The culture that surrounds the show that makes it captivating as an American movie fan to watch as well. Decorating the walls of the office are posters of famous films from the 40s and 50s. The agency sits on 149 Rue Saint-Honoré, near Palais- Royal and the Louvre. It’s not ‘Emily In Paris’, it’s an authentic peek into a culture that is rich with history, beauty, and art. It’s not the cliche of Paris that Americans think of, it’s what Parisians think of when they think of home. Over half the show was filmed on location, which is more than most television shows, and was an intentional artistic decision.

It’s also precisely the fact that it’s not set in Los Angeles that takes away some of the cruel undertones that satirical versions of Hollywood often have. The assistants are not miserable that they are at work, they are dedicated to their jobs and play an important function in the workplace. The agents are not cold and detached, they are calculated and funny. It’s a new way to show the entertainment industry, outside of tropes used in shows like it such as ‘Entourage’ or ‘30 Rock’. It remains funny and fast-paced while never being overwhelming. Phillipa Snow in a review in The New Republic summed up the tone perfectly. “Call My Agent’, which does not contain even a single joke about a needlessly specific latte order, breaks the mold in order to suggest that movies might, in fact, be as serious and important as real life.”

What makes this show captivating to its audience is the journey that you go on with the characters. The show is an ensemble, meaning there is not just one protagonist. The audience roots for different characters at different times; A stories and B stories bouncing around the entire workplace. Each character is deeply human, sometimes the villain, sometimes the hero, but most often somewhere in between. The job requires ruthlessness and ambition, often the characters scheme to get their way. They are flawed and make mistakes, but ultimately you want them to succeed. In one episode you can despise a character and the next you love them, which is a testament to the writing as well as the acting. Each character holds their own throughout the series, not just the agents, but the entire office.

Gabriel’s assistant, dramatic and hilarious Herve, Matthias’ assistant Noemie who is in love with him, sweet Camille who wants to reconnect with her father, and the secretary Sofia who has dreams of becoming an actress herself. The true breakout star of the show however is Camille Cottin playing Andrea Martel. Andrea’s chic Parisian style, no bullshit attitude, and quick-witted dialogue make her a joy to watch. She is a fierce competitor, excellent at her job but not as successful in her personal life. Fearing monogamy she bounces from woman to woman, sometimes even forgetting if she slept with someone or not. While Cotting started out on a hidden camera prank show called ‘Connasse’, her role as Andrea garnered her international attention, including several awards. In the fall of 2021, she will star alongside Matt Damon in Tom McCarthy’s ‘Stillwater’, as well as Ridley Scott’s ‘House of Gucci’.

Ensemble shows have an opportunity to really flesh out each character and give them time to grow into something else entirely. Character arcs can show growth as well as a deeper understanding of a character’s psyche that lies beneath. By allowing different episodes to focus on different people, the dynamics of the workplace become that much more interesting and the employees themselves become more human. They aren’t confined to their occupation, but rather their occupation gives them an opportunity to explore their dreams, insecurities, and a universally understood need for love and companionship. The ensemble cast creates a world, not a show, and that world is easily understood and accessible to the audience; whether they speak the same language as the audience or not.