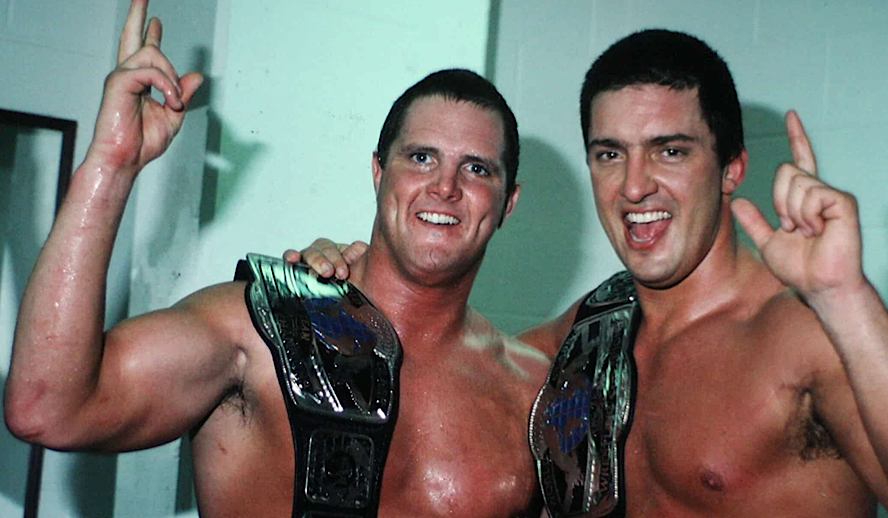 Photo: ‘Dark Side of the Ring’

Documentary filmmaking is no less difficult of an undertaking than that of features or scripted TV.  From numerous interviews to conduct as well as still trying to tell a coherent story about a given topic or event, documentaries have their own respective challenges to overcome in bringing their messages to audiences.  Like any other medium, some documentaries succeed in their endeavors while others don’t.  Very few, however, can tell an engaging story or provide a thorough analysis of a topic, grab hold of the audience’s emotions, and spark a viewer’s interest in wanting to know more about the subject.  Enter Vice’s ‘Dark Side of the Ring’, a documentary series created by Evan Husney and Jason Eisener that delves deep into some of the most controversial events or figures in the world of professional wrestling, an industry where the line between reality and fiction is blurred.

There are no restrictions on the topics that the show covers.  The series touches on well-known events such as Chris Benoit’s double murder-suicides in the episodes ‘Benoit-Part One’ and ‘Benoit-Part Two’ while also diving into relatively obscure figures like the relentless violence of hardcore wrestling legend New Jack in ‘The Life and Crimes of New Jack’.  There are many elements about this show that make it as enthralling and captivating as it is, both for longtime pro-wrestling aficionados and those who have never seen a single match in the ring.  The dynamic interviews, the eerie reenactments, the use of old footage, and especially the music all create as accurate and engaging a retelling of these events as one can.  This is what a documentary film or series should ultimately accomplish.  ‘Dark Side of the Ring’ checks all these boxes and achieves so much more in its style of storytelling.

‘Dark Side of the Ring’ – Captivating Interviews with Contrasting Viewpoints

All documentaries have some kind of agenda or message at the center of their stories. This is especially reflected in who’s being interviewed, what answers they’re providing, and what the editors are cutting out from the interview.  The approach on ‘Dark Side of the Ring’ seems to be simply that of recalling certain events by platforming multiple individuals involved and allowing them each to share their own perspectives on what took place.  This is especially intriguing when the show cuts back and forth between two individuals who are being interviewed and have polar opposite opinions about a subject.  The episode where this was especially prevalent was ‘The Brawl For All’ which covered an experiment by the WWE to have its wrestlers compete in a non-scripted fighting tournament where the winner would receive a cash prize as well as a major push within the company.  Arguably, the single most captivating aspect of this episode was the intercut interviews between Vince Russo, a former writer for the WWE as well as the architect of the tournament, and Jim Cornette, a legendary pro wrestling manager known for his visceral hatred of Russo and his contributions to the industry.

Throughout the episode, the viewer can clearly see the different attitudes of the two toward the wrestling business.  Russo, at the time, had just become involved in the writing of Monday Night Raw.  The episode then shows old clips of various angles and segments from the show that had a very over-the-top and wacky nature, implying Russo’s involvement in producing them.  Russo makes his views of pro wrestling very clear at the beginning of the episode when he explicitly says “…because I hate wrestling, bro.”  His approach of embracing the scripted nature of the sport was prevalent throughout his career as well as in this episode.  Cornette, on the other hand, is an individual with decades of experience in the wrestling business in a variety of roles.  At a point in the episode, when Cornette discusses his desire to hospitalize Russo, he forcefully says “Wrestling has been the most important thing in my life.”  Throughout the episode, we hear Cornette fuse his extensive knowledge of the wrestling business into his case against the Brawl for All and Russo’s ideas.  This dynamic between the two figures made for a captivating analysis of the tournament.

Mix of Real Footage with Reenactments

The series, like many documentaries, features reenactments of certain incidents or events.  However, instead of seeing the faces of the actors, the reenactments are done in slow motion with a dark overlay that almost entirely blurs the actors’ faces.  This all adds a sense of eeriness to the events that are unfolding and presents the events in an almost investigative light.  While not all episodes are centered around crimes in the industry, the show borrows many tropes from standard crime documentaries which enhances the viewer’s emotional attachment to what is taking place.

Fused in with the reenactments is a sizable amount of actual footage and clips from old wrestling programs.  This not only provides tangible documentation as to how these events actually unfolded, but also fills in some of the holes as to what somebody might have been like at that time and what would drive them to take certain actions or behave the way they did.  Some episodes, such as ‘The Final Days of Owen Hart’ which focuses on the events leading up to Owen Hart’s death, uses archival footage of his family’s home videos from his widow, Martha Hart.

Music isn’t often something one looks for or is taken aback by when watching a documentary.  For ‘Dark Side of the Ring’, a massive reason why it is very easy for the viewer to become emotionally attached to each episode is the music.  Composers Wade MacNeil and Andrew Gordon Macpherson perfectly find the sound and tone of the world of professional wrestling while also handling the subject material with the delicacy and weight that it deserves.  Many of these stories revolve around touchy subjects like drug abuse, mental illness, and grief.  The composers handle these topics with a sensitivity that the audience can really appreciate and thus, become emotionally attached to.