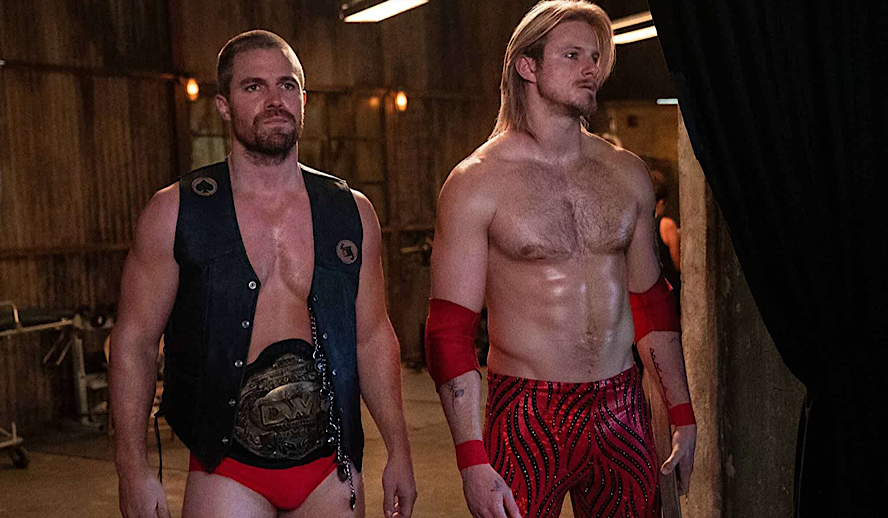 Starz’s newest series, ‘Heels’, opens with a man at a laptop, typing up a script for a wrestling match, all the moves that will be performed, and who will perform what. Cut in between this is the wrestlers performing these moves for a crowd of fans, both cheering, and booing. This introduces the audience to the world of wrestling, the behind-the-scenes reality of how a match comes to be, and the in-the-ring action we are so familiar with.

‘Heels’ is a typical family drama with a compelling hook. The series follows the Stone brothers, the family man Jack (Stephen Amell), and the younger and wilder Ace (Alexander Ludwig) who play wrestling rivals in the small town Georgian wrestling league. While ‘Heels’, being named after the wrestling term for “bad guy”, could have easily been a half an hour comedy, the series is instead an hour-long drama that contributes to the strengths and weaknesses of the pilot.

‘Heels’, at its core, is a drama between two brothers who not only play rivals but are also really rivals more than they would like to admit. Even though Jack, who has practically taken over the family wrestling business while playing the heel, and Ace, the already more successful younger brother who plays the “face” (good guy), play enemies in the ring they would still like to believe that they are close brothers in real life. This gets tested in the pilot where Ace decides that he doesn’t want to lose the big match despite his brother’s script and when a cocky wrestling scout (Chris Bauer) sees potential in Ace. This only makes Jack more annoyed at his brother’s cockiness and even a bit jealous of him, leading to the real family drama of the show.

‘Heels’ has surprisingly more in common with ‘Friday Night Lights’ than it does with other wrestling series like ‘Glow’’. Like ‘Friday Night Lights’, ‘Heels’ is a small-town family drama but while the small town in ‘Friday Night Lights’ tailgates before football games, this small town tailgates before wrestling matches. The small-town feel in ‘Heels’ is one of the most successful parts of the pilot with beautiful shots showing the mundanity of the town, from old men pumping gas to sitting below the fireflies up in a water tower. The small-town feel of the show also adds to the drama, where everyone knows each other’s business and where word spreads around fast.

This mainly affects Ace, who despite being seen as a hero in the ring is seen as a screwup to many people around town. Jack, with a wife (Alison Luff) and kid (Roxton Garcia), seems content with his small-town life while Ace clearly wants bigger things. This element not only adds more to the drama between the brothers but will be relatable to audiences, that feeling of wanting to do bigger things than your environment has to offer. While another show would portray the small town as dire to further illustrate why Ace wants bigger things, the series portrays small-town life with love and respect, showcasing the support of the community, showing that small-town life has beauty.

The strength of the pilot, rightfully entitled ‘Kayfabe’ after the wrestling term for presenting wrestling as authentic, is its authenticity. From the realistic conflict between the brothers to the shoddy building where the matches are held, the show feels authentic to independent wrestling. Independent wrestling is nowhere near as glamorous as the showy and highly produced matches from big names like WWE or even Glow back in the day, and ‘Heels’ authentically shows the reality of small-town wrestlers trying to make it big. The Spade brothers also feel authentic, with their loving yet confrontational dynamic ringing true to any pair of siblings who are competing in the same business. There is the support between one another yet a sad feeling of not wanting the other to become more successful. ‘Heels’ expertly illustrates these complicated emotions while inviting audiences into a realistic portrayal of life in the indies.

The Minefields of Pilots

Making a pilot for any show is like stepping over minefields since there are components of any given pilot that are easy to fail. ‘Kayfabe’ is not a perfect pilot and there are components that can bore new audiences, especially those who are not already in the wrestling community. ‘Heels’ has a tendency to use too much exposition, making some scenes drag longer than they really need to. This is especially the case for scenes that involve explaining the rules of wrestling, where they explain it to a side character in the room as a way to really explain it to the audience. These moments come off as a little long and unnatural, especially when most of the side characters that are used to explain these rules do nothing for the plot, as if they are only there to be the perspective of the audience.

‘Heels’ is an hour-long drama but by the end of the pilot one almost wonders if it really needed to be that long. With many scenes dragging on a little longer than they really need to, the pilot could have easily been forty-five to fifty minutes like other current dramas such as ‘the White Lotus’ and ‘Nine Perfect Strangers’. By not pushing for the full hour, the pilot could have seemed not as slow at parts while leaving the audience wanting a little more in time for the second episode to come out.

While these are issues with the pilot it is important to mention that these are just the minefields of any pilot. Pilots are typically one of the weakest episodes in any series since a pilot has so much to do like introducing the audience to the world, story, and characters while trying to keep their attention with a story that can be contained on its own. Pilots have a lot of responsibility and are an art in and of themselves so one must wonder if these issues will continue in the episodes that are to come.

‘Heels’ is a captivating family drama that shows the reality of independent wrestling. The title shows that these characters are complicated, they are more than the characters they play in the ring. While Jack is a loving husband and wife he plays the villain and while Ace is an irresponsible narcissist he plays the hero. While Jack is a family man he is jealous of his younger brother and while Ace is irresponsible he deeply loves his family. They are neither just heels nor faces, they are both since they are complicated people. While ‘Heels’ is about wrestling it isn’t just for wrestling fans and will captivate anyone who enjoys a good family drama or an honest portrayal of small-town rural life.

‘Heels’ is available to watch on Starz

Created and Written by: Michael Waldron