‘The Humans’ Is Not Your Average Haunted House Film 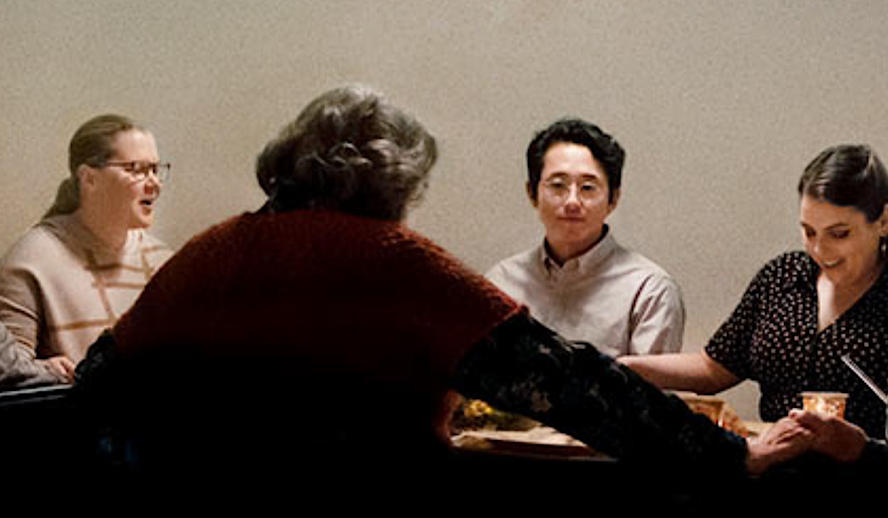 ‘The Humans’, directed by Stephen Karam and based on his play of the same name, is a claustrophobic and hellish portrayal of the American family. The term “hellish’’ may lead you to believe that this is a horror and this isn’t completely false. While the film is not a horror per se, the film evokes the same emotions that come with watching a horror film. What evokes this horror though? Hosting Thanksgiving dinner. The film follows aspiring musician Brigid (Beanie Feldstein) and her boyfriend, Richard (Steven Yeun), who host Thanksgiving for Brigid’s family at their new apartment in Lower Manhattan. Brigid’s family includes her bickering parents, Erik (Richard Jenkins) and Deirdre (Jayne Houdyshell, reprising her role from the play), her older sister dealing with the loss of a job, Aimee (Amy Schumer), and grandma “Momo” (June Squibb) who is suffering from Alzheimer’s.

‘The Humans’ – Creating Horror With Sound and Setting

The film may not be a haunted house movie, but it uses the same techniques as one to create its unsettling mood. The new home of Brigid and Richard is completely empty since their moving truck is currently stuck in Queens. The apartment isn’t full of homey furniture and pictures but is instead full of uncomfortable temporary chairs and barren walls. The apartment is too big for it to be considered warm but is too cramped for it to be considered roomy; it is the typical nice but also kind of dumpy New York apartment. Silent close-ups linger on the imperfect flaws of the new home, from water stains on the ceiling to boils of paint just waiting to burst open on the wall. These close-ups have the same effect on the lingering shots one sees in a haunted house movie. They make the setting seem like something out of a warped funhouse mirror, something so familiar yet so alien. This idea of something being so familiar yet so alien works for the family dysfunction of the film, where one’s family is the most familiar aspect of their life, but seems alien as their inner demons are revealed.

The film also uses sound to create an unsettling tone. The sound design, done by the legendary Skip Lievsay of ‘Silence of the Lambs’ and ‘Inside LLewyn Davis’, is the real root of the film’s horror. The apartment seems alive, like a character of its own, with its loud creaks and mysterious banging. With sounds of clunking coming from neighboring units to ill-timed echoes, the film evokes jump-scare levels of fear. These noises often interrupt the characters in their tracks or worse, create even more drama like characters overhearing gossip about themselves through the echoes and squeaky footsteps in an empty room, causing one’s panic attack. With these jump scare level sounds mixed in with its claustrophobic space, I found myself digging my fingers into my thighs multiple times. I felt as tense as the characters.

The Blake family loves each other, it is easy for the audience to be able to see this with their inside jokes and support of one another, but they are extremely flawed. They jab at each other’s weakest points, from Brigid commenting on her mother’s binge eating to Erik, always telling Brigid to work in retail instead of being a musician. They can even be resentful of one another, like Brigid resenting her parents for not financially helping her move to New York. They are flawed like a real family, but there is a darker side to them that is slowly rising throughout their dinner. Erik and Deirdre are sitting on a secret that can change their family forever. Aimee is sitting on a secret that can change how everyone will treat her from this point forward. And Momo’s outbursts always leave the family an emotional wreck.

While the noises and atmosphere make the film feel like a haunted house movie, one could argue that the family makes the film a haunted house movie. They aren’t haunted by ghosts though; the family is instead haunted by their own economic anxiety, memories, and even the anxieties that were left after the 9-11 attacks. The family, especially Erik, feel as though they are in their own personal horror film. At one point in the film, a drunk Erik describes a recurring nightmare he has been having about a faceless woman. It is a vulnerable moment for Erik, but the family makes fun of his dream, his nightmare even becoming a recurring joke among the family in the film. The audience soon half expects the faceless woman to make an appearance in the film and while she doesn’t, the audience is still put in Erik’s neurotic shoes.

The family feels so real in the film thanks to the astounding performances of the actors. The characters feel truly lived in, from Aimee’s snarky asides that hide her real emotions to the way that Erik feels the need to tweak every small flaw in the apartment. Perhaps one of the best performances may be from Feldstein. Feldstein delivers cold and judgemental jabs through such a cheerful facade that it may at times take the audience a second for the coldness of her remarks to really register. Then there is Jayne Houdyshell as the free-spirited but emotionally wounded mother of the family. Reprising her role from the play’s run, it is easy to see why Houdyshell returned to portray Deirdre, since she may arguably be the one person who can truly play this character. She plays her character with a quiet sadness that may make the audience see their own mother within Deirdre. Each member of this family may make the audience see their own family members within them, which may or may not lead one to want to call their parents to check-in.

‘The Humans’ is perhaps the most human film to come out this year. The film tackles the very human struggle of hosting Thanksgiving dinner and the family truths that are revealed throughout the night. While the film may be about very human struggles and issues, it also acts as a haunted house film. A haunted house film that uses claustrophobia and sound to create an unnerving feeling. A haunted house film that doesn’t rely on ghosts or the supernatural but instead relies on how our own family drama and fears haunt us. ‘The Humans’ may not be for everyone, it is another prestige A24 drama that is a bit of a downer, but for those interested in a gut-wrenching portrayal of the American family, then ‘The Humans’ is for you.

‘The Humans’ is available to stream on Showtime