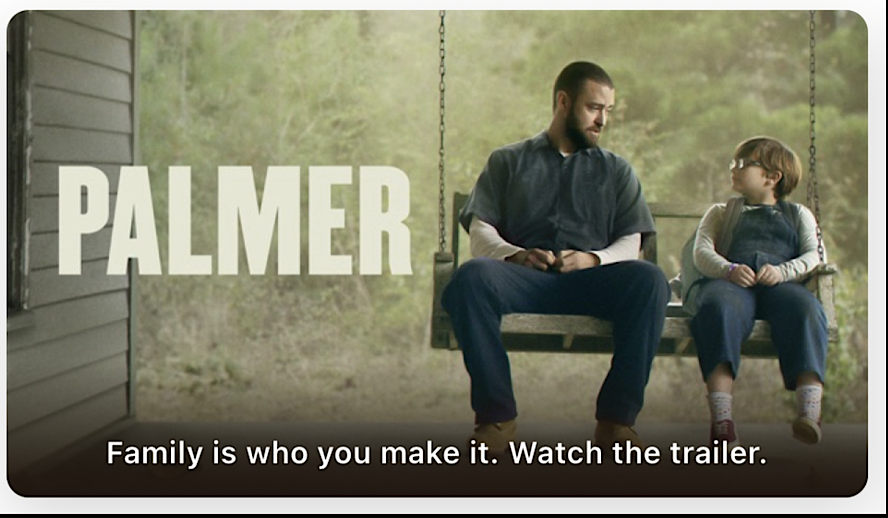 If I were to say the word, Timberlake, memories of nights flooded with the blaring sound of ‘SexyBack’ or trying on skinny jeans at the mall while ‘Mirrors‘ floats through the dressing room might just fill your mind. For most artists, breaking between specializations takes talent, whether born or conceived, and time studying and influencing not only themselves but the world around them into seeing and believing in their newfound mission.

Justin Timberlake’s success as an entertainer and Fisher Stevens’ success as an actor make them a duo against the odds of their brand and experience. Timberlake’s past roles showcasing his range of acting alongside award-winning directors and actors has been a construction of work that has led him up to this very point. A point in his career that has proven to be more than worthy of recognizing his acting strength alone or more so my tears that soaked my cheeks and constricted my airway after watching ‘Palmer.’

Related article: ‘Penguin Bloom’: A Heartfelt Story of Learning to Spread Your Wings

Related article: ‘Outside the Wire’: A Futuristic Film About Two Black Soldiers

In a quaint Louisiana town, Timberlake portrays an ex-convict seeking redemption named Eddie Palmer, a former high school hotshot football player before growing up only to succumb to the real world and falling behind bars. After being released from jail, Palmer returns home to his grandmother, Vivian, portrayed by June Squibb (‘Nebraska,’ ‘About Schmidt’), only to soon meet the eccentric 7-year-old Sam portrayed in his first feature debut by Ryder Allen. Sam, neglected by his mother, Shelly portrayed by Juno Temple (‘Atonement,’ ‘Mr. Nobody’), is a young boy who breaks the logic of masculinity as he plays with dolls, wears hair accessories, and admires Disney princesses. This results in relentless bullying towards Sam from his peers, bullying that Palmer comes to defend against after taking on as a father/brother figure for Sam.

Palmer comes to find a job at Sam’s school as the janitor, where he meets Sam’s teacher, Miss. Maggie, portrayed by Alisha Wainwright (‘Raising Dion,’ ‘Shadowhunters’). Palmer and Maggie find themselves bonding a relationship as well through Palmer’s journey through redemption.

Fisher Stevens has curated a film that holds truth, casual interpretation, and real-world bonding scenarios that play perfectly for Timberlake. The storyline, quite similar to 2013’s ‘Joe’ starring Nicolas Cage (‘Face/Off’) and Tye Sheridan (‘Ready Player One’), a film that also exhibits an ex-con who bonds with a younger boy with a troubled life as they search for a better existence. But, at the moment in our world where we might feel disconnected from each other, a film about people coming together no matter their differences just might be exactly what we need. Palmer, a man, lost in the world looking for a path in his life, and Sam, a young boy, learning to express his true self when the world is against him.

Seeing Timberlake raw, emotional, and displaying a sensitive side of himself we have not yet seen, I could not even begin to believe that the man on the screen was the same man singing to children as a colorful, wild-haired troll. Palmer and Sam’s tender connection is full of endearment and pure joyful existence that it engulfs my heart with light to see. In a way, Sam was the end of the rainbow after a rainstorm, and Palmer was the lost soul in the rain until he saw that same rainbow and found his purpose. Justin Timberlake isn’t the Justin Timberlake we have come to know, but instead, he is an imperfect person with flaws, and he shows that with time and an open heart, you can change your life and see the beauty that Sam so perfectly offers.

‘Palmer’ – Stevens and Timberlake: The Jack of All Trades

Directed by Fisher Stevens, ‘Palmer’ is an American drama focusing on redemption from Cheryl Guerriero‘s screenplay (‘Hunting Season,’ ‘Pledge This!’).

In 2016, the screenplay for ‘Palmer’ appeared on the Black List, a place where most-liked screenplays that have not been produced go. Examples of films that were also found from the Black List include ‘The Revenant,’ ‘Argo,’ ‘American Hustle,’ and much more.

Stevens’ past directorial pieces mostly consist of documentary work, including ‘Just a Kiss,’ ‘Stand Up Guys,’ ‘Before the Flood,’ and ‘And We Go Green.’ Although someone might find Stevens’ more recognizable through his acting debuts in pieces such as ‘Short Circuit’ alongside Ally Sheedy (‘The Breakfast Club’) and Steve Guttenberg (‘Three Men and a Baby’), ‘Awake’ alongside Hayden Christensen (‘Star Wars: Episode II – Attack of the Clones’) and Jessica Alba (‘Fantastic Four’), and ‘Hackers’ alongside Jonny Lee Miller (‘Mindhunters’) and Angelina Jolie (‘Changeling’). His acting background surpasses his experience in directing debuts in quantity. An intriguing addition besides his acting and directing is that Stevens’ produced the Netflix quarantine hit and social media rampage of comedy excerpts, ‘Tiger King.’

Justin Timberlake, musician, actor, and composer, began his acting career as a 12-year-old child performer on The All-New Mickey Mouse Club (MMC) alongside Britney Spears (‘Crossroads’) and Christina Aguilera (‘Burlesque’). In 1995, Timberlake would join one of the most successful and known boy bands, NSYNC. Becoming the band leader, Timberlake would soon branch out into the world of acting as he would star in 2000’s Disney Channel original ‘Model Behavior.’ After, he would create long term influences and industry memories such as his denim tuxedo match outfit alongside his girlfriend at the time, Britney Spears, at the 2001 American Music Awards. In 2002, Timberlake would take the leap to perform as a solo artist only a few months before his first debut solo album ‘Justified’ containing club classics such as ‘Cry Me a River,’ and ‘Rock Your Body.’ From then on, he would release hit after hit as a solo artist as he would perform at the 2004’s Super Bowl Halftime and 2004’s Grammy Award Winner for best male pop vocal performance for ‘Justified.’

Timberlake’s big break in the acting industry was for the astounding 2010’s ‘The Social Network’ alongside Jesse Eisenberg (‘Zombieland’) and Andrew Garfield (‘Hacksaw Ridge’), a film that Quentin Tarantino would later call the best film of the 2010s. After this big break showcasing his strength in professional acting, he would secure two romantic comedies and a drama only a year later for ‘Bad Teacher’ alongside Cameron Diaz (‘Vanilla Sky’) and Jason Segel (‘Forgetting Sarah Marshall’), ‘Friends with Benefits’ alongside Mila Kunis (‘Black Swan’) and Patricia Clarkson (‘The Green Mile’) and ‘In Time’ alongside Amanda Seyfried (‘Mean Girls’) and Cillian Murphy (‘Inception’).

In 2013, Timberlake would appear in the Coen Brothers, Ethan Coen and Joel Coen’s ‘Inside Llewyn Davis’ alongside Oscar Isaac (‘Ex Machina’) and Carey Mulligan (‘Never Let Me Go’). From then to now, he would debut on the Billboard Hot 100 with ‘Can’t Stop the Feeling!‘ and release a few albums, including ‘The 20/20 Experience‘ and ‘Man of the Woods.’ His last feature role was the voice role as Branch in 2016’s animated ‘Trolls.’ With some time and convincing, Fisher Stevens landed Justin Timberlake for Eddie Palmer’s role.

With Fisher Stevens’ choice to stick with streaming platforms during the pandemic, ‘Palmer’ releases January 29, 2021, available on Apple TV+ on devices such as Apple TV, Roku, Amazon Fire TV, gaming consoles, and mobile and web devices. ‘Palmer’ is rated R for language, some sexual content/nudity, and brief violence.

Where to Find The Stars

While still in the process of pre-production, Juno Temple is expected to be seen in Mickey Keating’s ‘Crooks’ alongside Lena Headey (‘Game of Thrones’) and Mark Kassen (‘Before We Go’).

In the post-production stage, June Squibb will next be seen in Stephen Karam’s ‘The Humans’ alongside Steven Yeun (‘Okja’), Beanie Feldstein (‘Booksmart’).