Scandal through the Female Gaze in ‘American Crime Story: The Impeachment’ – Monica Lewinsky 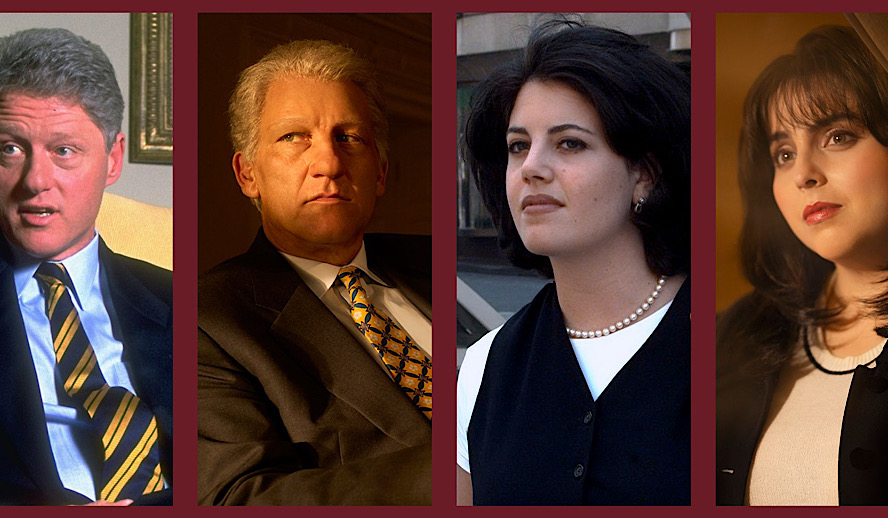 Sarah Burgess and Ryan Murphy’s new series proves that stories about women are best told by women. ‘American Crime Story: The Impeachment’ offers a fresh take on a scandal that shook the core of politics, life, and gender. Burgess, the writer, explores the motivations of Monica Lewinsky, Linda Tripp, and even the less-known figure Paula Jones. The series aims to reset our theories of the relationships of the central figures of the story told through the eyes of a woman whose series is produced by the woman at the crux of the story, Monica Lewinsky.

‘American Crime Story: The Impeachment’ focuses on women navigating the toxic nature of the patriarchy. The series dismantles the flawed archetype of the perfect woman and pushes against society’s tendencies to vilify women in the face of adultery. Sarah Burgess tackles the difficult questions of how women in powerful environments endure sexism and harassment. The women of ‘American Crime Story: The Impeachment’ share the common thread of pushing against the patriarchal force of politics.

The series portrays life within the West Wing of the White House and the dueling personalities competing for power and influence. Men are at the top of the pyramid while the women in the White House take on administrative and secretarial duties. The chess game of politics extends to women fighting for their positions, even if that means working under the thumb of men, to attain a fraction of power. Burgess’ starts the season by analyzing female ambition through the complicated lens of Linda Tripp, a woman with the ambition to procure an influential position within the West Wing and the motivation to feel a sense of superiority amongst her peers. Burgess struggled to understand how Linda Tripp could deceive her friend and expose their darkest secret. “Something about it messed me up. … I was grappling with, ‘What makes someone go this far?’”

Despite the scandal being widely reported and ingrained in our country’s political history, Burgess is able to shapeshift the narrative and give power back to the women at the heart of the story. It’s refreshingly clear to see what drew Lewinsky and Tripp together; Their ambitions are mutually obstructed by the decisions of men and their roads lead to a path of airing their grievances with the gray walls of the Pentagon. However, the story takes a dark turn as we watch Linda Tripp reveal the depravity of her ego and how far is she willing to go to avenge the White House.

At first, Paula Jones’ story seems separate from Lewinsky and Tripp. A woman whose identity is wrapped up in being the perfect wife. Her docile nature seeks his approval and leads her down a path where she is manipulated by men to put herself into the public eye by sharing a story where she felt sexually violated by the President of the United States. She’s guided by men who are using her story as a vehicle to achieve personal ambition and notoriety. Despite her involvement, Jones struggles to share her story and is initially mocked for expressing how she felt sexually harassed by the most intimidating figure in national politics.

The Archetype of the Perfect Woman

One of the most controversial personalities involved in the scandal, Linda Tripp, was a conquest Sarah Burgess struggled to understand. It was difficult to empathize with a woman who betrayed her friend. Attempting to tackle Tripp’s story, Burgess followed Tripp’s professional career and was initially stunned by Tripp’s impressive work resume. Burgess began to feel a sense of sadness for Tripp, a woman who was at the height of her career to then have the rug pulled out from under her.

It’s easy to typecast Tripp as an angry, middle-aged woman who feels lonely from her divorce. However, Burgess doesn’t allow you to fall for those misconceptions. Instead, she challenges you to view Tripp as a woman who has had her career determined by men and is now a tired bureaucrat who maintains her ambition to achieve ascendancy within the world of politics. Tripp isn’t portrayed as a woman who is lamenting the loss of her marriage, rather, she is mourning the loss of her powerful position in the White House. While men are rewarded for their cut-throat nature, women are persecuted for daring to step out of society’s established concept of femininity.

In ‘American Crime Story: The Impeachment,’, Monica Lewinsky is observed as a professional woman working as an intern within the fortified walls of the White House and the Pentagon. Lewinsky is suddenly thrust into the spotlight and labeled as nothing more than a sexual figure who pursued an adulterous relationship with the President of the United States. The media instantly stripped Lewinsky of her identity and painted her as the villain of the story. The series introduces viewers to a different version of Monica Lewinsky; A woman seeking a coveted career in Washington D.C. working alongside political heavy hitters who designed and enforced laws throughout our nation. She is neither innocent nor guilty, she is human and made a mistake equally grave as her counterpart, Bill Clinton.

In ‘American Crime Story: The Impeachment’, Monica Lewinsky’s story doesn’t begin until she meets Linda Tripp. Lewinsky’s career evolves from an intern to a position in the White House and is subsequently demoted to the Pentagon in an effort to protect Clinton’s campaign for re-election. As a producer for the show, Monica Lewinsky felt the story needed the authenticity it originally lacked, “So, ultimately, I felt two things: One was that I shouldn’t get a pass because I’m a producer; and two, that it was unfair to the team and to the project because it would leave everybody vulnerable.”

The show revises the fatal errors made by the media, allowing Burgess to recreate the narrative of Lewinsky’s relationship with Bill Clinton. The shows come on the heels of the Me Too Movement, where sexual harassment is widely discussed. Lewinsky wasn’t offered the same support on a global stage that many women are offered now. When Lewinsky signed on to the project as a producer, she knew the process would be daunting, but she was ready to regain control of her story and emerge as neither the villain or victim.

Femininity in a Man’s World

Beanie Feldstein, the actress portraying Lewinsky, allowed herself to feel the anguish of a woman in love with the world’s most unattainable man. Feldstein explores the burden Lewinsky must have felt to keep her relationship a secret. On top of that, Feldstein notes that she was immediately drawn to the friendship of Linda Tripp and Monica Lewinsky, finding inspiration from the pain of being professionally and personally cast aside. “What happens when you, as a human being, are made to feel like you don’t matter, or you’re tossed aside? Or you’re made to feel insignificant? What can that feeling create in someone?”

The third season of ‘American Crime Story: The Impeachment’ is a dramatic and addictive series that takes an exciting deep dive into one of the most talked-about scandals in American history. Sarah Burgess tackles the most noteworthy moments of the scandal, decoding the personal trauma for Lewinsky perpetuated by the media. The female-driven script instills a complex view of femininity and humanity into the Monica Lewinsky and Bill Clinton story.