‘The Exchange’: A Comedy Romp with Je Ne Sais Quoi 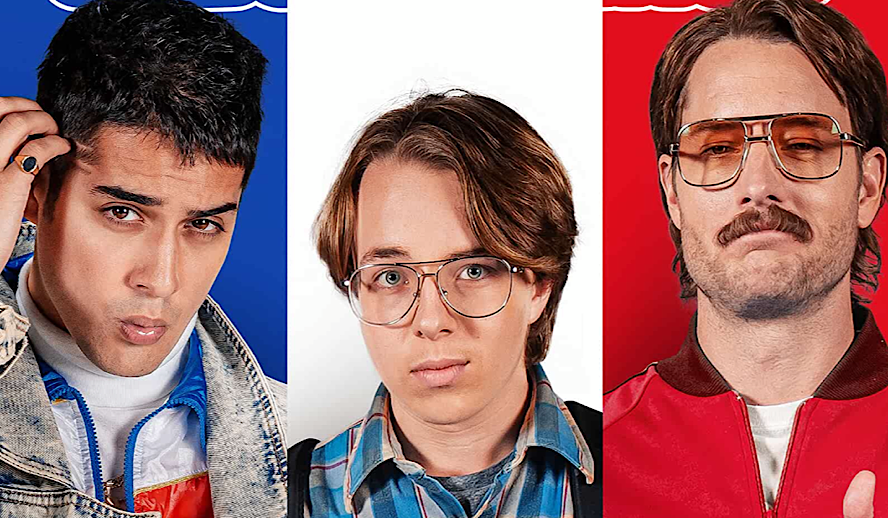 Tim Long is from Hobart, Ontario in ‘Godforsaken’, Canada. Tim is an unpopular but intelligent high school student with a taste for ‘The Smiths’ and French New Wave films. Tim is looking for a best friend; an uber-cultured, European one, if possible.

Ed Oxenbould – whom you might recognize from M. Night Shyamalan’s 2015 horror film ‘The Visit’ – plays this protagonist and narrator, Tim. His desperation for a like-minded companion leads him to submit an application to host a foreign exchange student from France, but his anticipation quickly turns to alarm when he finally meets his match: Stephane, played by Avan Jogia, who appears in a cool-toned, color block windbreaker and a single dangly earring; an image of mid-80’s euro-pop. His warm peculiarity is welcomed by the Long’s and the rest of the town, but Tim is less than thrilled. What entails is the classic story of an unlikely friendship between a desperate nerd and an enchanting newcomer.

As is to be expected from a film directed by co-writer of the legendary Borat, Dan Mazer, there’s a fair amount of satire related to the ridiculous instances of passive racism and microaggressions that emerge from dropping Stephane into this fish-bowl of a community. Despite pressing from most everyone, it’s never specified ‘where exactly’ Stephane is from, because it doesn’t matter. What matters is that despite him being raised as a pure Parisian, sometimes, people cannot keep themselves from looking beyond ‘upbringing’ to reap assumptions from something as unindicative as skin color. While the film isn’t illuminating any new perspectives on the issue, it adds a sense of dimension to the story and character.

Justin Hartley is ridiculously funny and, in my opinion, criminally under-used. You can just tell from the moment that he walks on screen in those aviator shades that he’s the type of guy to greet you with an absurdly intense handshake. Jennifer Irwin and Paul Braunstein are entertaining and believable in their performances as Long’s parents. Jennifer delivers that sugar-coated bluntness a-la Kitty Forman that works so well for TV/movie nerd-moms, and Braunstein’s deadpan, every-man father figure works well as a sounding board for the other characters’ eccentricities. Jayli Wolf is absolutely adorable and fitting as Tim’s quirky love interest, Brenda. Both teachers Kathy Greenwood and Melanie Leishman also deserve a mention, holding their own as minor characters and rounding out the tail-end of the supporting cast.

Avan Jogia is super likable in this film, and none of it would work without his dedication. He commits to his character, but in a subversion of expectation, there’s something much more authentic to him than your typical foreign-exchange caricature. Don’t worry, he absolutely engages in his share of debauchery and ‘exotic’ influence over the hive-minded Canada community, but he also imparts unexpected wisdom and spreads his carefree energy far and wide. Stephane really feels like a guy that you aren’t quite cool enough to be friends with but hangs out with you anyway, just like Tim Long.

The music is fun, with every transitionary beat and stroke of the electric piano. it calls forth the pure, jubilant nostalgia of any assortment of 80’s pop classics. Many times, I expected some version of Lauper or Bowie to start playing, but was instead just instrumentally boogied into the next scene. While the 80’s time period is more of an accessory to the film than a vested commitment, the score was sufficient in setting the stage and evoking the same themes that are so familiar in other beloved comedies of the decade.

Despite being our protagonist, Tim Long is little more than your run-of-the-mill straight-man character; somehow deeply pretentious but still socially awkward with few identifying characteristics to distinguish him next to other basic protagonists in teen-comedy movies, other than what seems to be an extensive collection of itchy, patterned sweaters. It feels like a missed opportunity for Stephane to be embodied so fully, with plenty of off-beat qualities, and for Tim to be so painfully bland in comparison. I realize that dull neuroticism is at the core of this kind of character in a lot of ways, but it just shouldn’t be all of it. In hindsight, it makes sense that the main character was basically a self-insert for the screenwriter, Tim Long; though he has a heavy role in the film, it never quite feels like Tim is much more than just a vessel through which the story is told.

‘The Exchange’ is a fun romp: it knows what it is, that’s what’s good about it. However, it’s hard not to yearn for more with likable, idiosyncratic characters like this. The first half is undeniably stronger, with Stephane’s light-hearted frolic through the lives of these Ontarians providing plenty of laughs and commentary on the sheltered perspectives of a close-minded community. The farther along you follow the story, the more clear that it becomes that this story is – above all else – a vehicle for the characters to be funny. While the film spends time making you laugh and familiarizing you with the characters, it neglects to craft real, dimensional conflict beneath all of that, making the dispute feel more like the grand and coincidental progression of an afterschool special. Overall, nothing new is learned, but you will still be pleased to have watched it.

There’s a lot of charm in this film. I have to say as a precursor: something that I can really admire about a film, regardless of flaws, is whether or not it has heart. If there’s an effort towards excellence in some aspect, then I know that there was at least some semblance of passion behind the project; this film has that. Though the film finds itself trailing along with the same old formula, it at least creates a loving-nostalgia factor, and characters that audiences can not only laugh at but truly become endeared towards by the end.

In conclusion, this film was easy viewing and a lot of fun. There were some clever, well-timed jokes and charming characters all around. This is where the strength lies: the committed performances, the endearing personalities, and finally, Avan Jogia’s french accent.

As Stephane would say, “we share happy time, huh?” I think that’s a succinct description of this film.

Dan Mazer’s next directorial project, ‘Home Sweet Home Alone’ starring Ellie Kemper and Rob Delaney, is in post-production and is expected to release this year. Avan Jogia is also set to appear in a project releasing later this year, a new installment of the Resident Evil franchise titled ‘Resident Evil: Welcome to Raccoon City’. Audiences should keep an eye out for an expected release date on Ed Oxenbould’s next project, a western film titled ‘Before Dawn’.