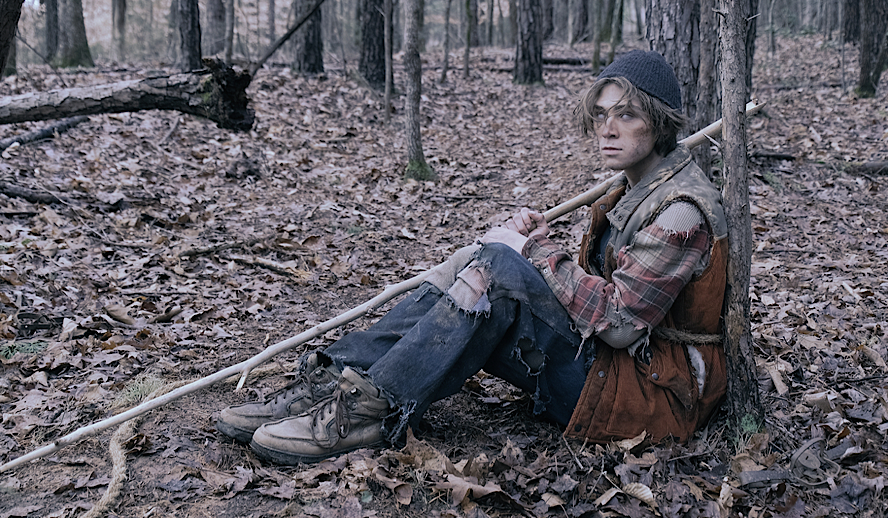 Solomon (portrayed by Jared Laufree) is a completely blind boy who lives in a woodland cabin with his mother (portrayed by Alexandra Paul). His father (voiced by Chris Demm) left when he was just about eight years of age. Now he and his mother must learn to navigate their isolated lives. Solomon learns how to hunt, fish, and forage at his mother’s instruction. Though one rule stands clear – when gathering something from the forest, you must give back “one for the forest, and one for you”. We see early on as Solomon and his mother throw half a squirrel that they trapped back into the woods to “feed” them. This “ritual” is one of the three rules that Solomon must follow. Rule number one, to be specific. The second rule is to sing his and his mother’s song when he feels frightened. And the final, arguably the most important rule, is “don’t let go of the rope”.

In order to find his way in the forest, Solomon must tie a rope around his waist. Attached to a column by the cabin, the rope serves as a limit and guide. The length of the rope does not extend far enough for him to enter the area of the forest where he throws animal cacases. Perhaps that was intentional on the behalf of his parents, in order to keep him away from what feeds off of these offerings.

Serving as a guide, the rope allows Solomon to venture into a certain part of the forest where he tends to his traps and lures, as well as using the river for fishing and bathing. One day, while fishing with his mother, Solomon stumbles upon a chain. He is sure that it connects to something, however, when he attempts to find out, his mother stops him dead in his tracks and tells him that it is time to go home. This particular scene is key foreshadowing for what will take place later on in the film, as well as an explanation for key elements of the plot, if you’re able to connect the dots.

When Solomon’s mother abandons him in the cabin, she leaves him an audiotape with instructions that detail the rules he must follow to stay safe. This tape, and an old goat, become Solomon’s only companions for many years. It is unclear how long he spent tied to the cabin, though based on guessed estimates it could be anywhere from five to ten years.

One day, as he waged through the forest, Solomon heard a gunshot. The unfamiliar sound startled him, yet enveloped him with morbid curiosity. He carefully made his way toward the sound, discovering a dead deer lying on the forest floor. He is approached by a strange man – the hunter who had shot the deer. Frightened by a presence that he could not identify, Solomon pulled a knife on the man. In self-defense, the man knocks Solomon out. While he is unconscious, the hunter follows the rope back to the cabin, taking Solomon along with him. When the boy wakes up, the man offers the deer to him in exchange for allowing him to spend the night by the fire. Solomon agrees, though he becomes frighteningly defensive when the man offers to take him back into town with him in the morning.

In the middle of the night, as both sleep, a roar comes from the forest, startling them awake. The man – Hank (portrayed by Kareem Furgason)  –  goes out to investigate the noise. Treading through the blackened wood with just a flashlight and armed with a rifle, he is confronted by the beast. He bolts back to the cabin and discovers Solomon rocking back and forth as he hums his and his mother’s song. Hank attempts to ask if Solomon knows what is in the forest, but the boy just turns away and continues humming. Deciding that it is a bad idea to leave the blind boy alone at the cabin with a slowly diminishing food supply, Hank offers to stay and help Solomon trap the beast.

The cinematography (by Aaron Sorgius) of ‘Tethered’ can only be described as observant. Reminiscent of an observant character (such as Solomon), the camera sweeps its surroundings carefully, as if trying not to trip. It notices the smallest of things, the kind of things that are often overlooked due to how unimportant they seem. Such as the gentle glow of the fire illuminating the room as a mother reads a bedtime story to her child, or the color of the sky during summer nights – bright pink and purple, casting a dim glow down on the forest, just bright enough so you can see the details of your hands if you hold them out in front of yourself.

One of the most notable performances in the film was given by Brody Bett (as young Solomon). Bett brought an unbelievable amount of energy into his role. From excited, truly childish laughter, to bright and exciting line delivery. Young Solomon made for a fantastic base for the rest of the film to build on. Teenage Solomon however, had clearly lost his childish spark. Jared Laufree’s performance was glum and defeated – appropriate for a child abandoned in the woods. Solomon’s overall character is very accurate to a neglected child’s mindset. From being overly defensive regarding change, to showing signs of regression when confronted with frightening circumstances. The sheer defeat that Solomon feels each day as he rises to navigate the empty woods with nothing but a stick and a rope, is very much evident in Laufree’s performance.

Combining psychological horror with an unnatural amount of suspense, ‘Tethered’ brings the viewer into a world of remarkable isolation. To an extent, you begin to feel what Solomon feels. Watching as he navigates the forest, you begin to understand how familiar it is to him, which is frightening on its own if we consider the circumstances in which our main character had to raise himself. With a mix of grief and angst, this film makes you feel young again in the most morbid of ways. Worth a watch!