‘Shoplifters’: Family Blooms in All Places of Life in Hirokazu Kore-eda’s Heartbreaking Film 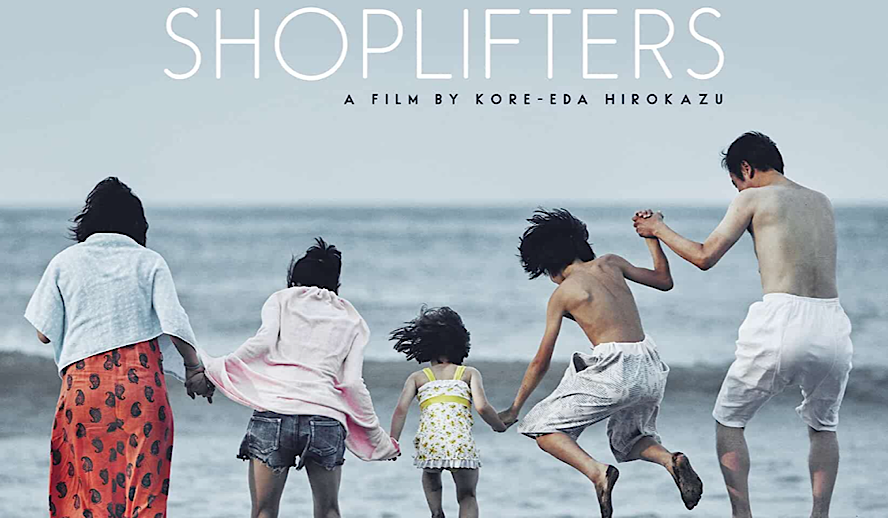 The blood of the covenant is thicker than the water of the tomb; This is the emotional thesis of Hirokazu Kore-eda’s heartfelt drama Shoplifters. In film and television, it is the commercial choice to portray the nuclear family with outside struggles, but Shoplifters is the quietly nurtured beginnings of a family that isn’t really family at all. The first Japanese film to win the Palme d’Or at the Cannes Film Festival since 1997, Shoplifters was both written and directed by the acclaimed Hirokazu Kore-eda and now is viewed as his most successful film, even with movies like Still Walking and Like Father, Like Son under his entirely impressive belt.

Osamu and his wife Nobuyo live with their young son, Shota, and Nobuyo’s sister Aki under their mother’s strained roof. All holding down odd jobs, the six family members do what they can while navigating the world of extreme poverty- namely shoplifting. With a snarky fist bump and a tap on the back, the film begins with Osamu and Shota performing an impressively choreographed dance across a supermarket, where they take what they need and don’t worry about the rest. On a victorious walk home, however, they find a small girl out in the cold without anyone looking after her. After a horrific discovery of the vicious abuse the young child was accustomed to, the hobbled family takes her in and little Yuri becomes their newest member. With every fiber they can give, the family is quick to realize they love Yuri, and losing her would be irreparable.

Silence plays a sincere role in this film as it serves to reflect real life. There is no swelling accompaniment music to follow a dramatic statement (alas, as much as I wish that were true), there is only one another and the words we have to give. It was a brilliant move on the part of Kore-eda, as his sentimental statements resounded on a much deeper level when the audience was forced to absorb them with nothing more than their own thoughts.

It is a popular complaint with a slice of life films that there is no justifiable reason to continue making them when we are all experiencing that reality. Why escape into a world of poverty when I am trying to avoid my own? Shoplifters may be about the struggles an unconventional family faces, but it manages the miracle of not falling flat in the moments of silence and stillness. Instead, they are tender and fragile- a moment suspended in the air, a moment that causes you to hold your breath just to ensure it doesn’t shatter into a million pieces because if it does, it will never exist the same way. Every frame of this film will hold you in an extraordinarily unique and human way.

The Cast of Characters

The spellbinding nature of this film is due in large part to the astonishing cast. Lily Franky led the family as Osamu, the good-natured father who so desperately wants his family to be happy, and his distinctive choices to weigh the character down with love instead of burden made his performance both endearing and heartbreaking. Kairi Jō and Miyu Sasaki play Shota and Yuri respectively and give astounding performances for their young age. There is a scene where Shota has received a small gift and Yuri trails after him, clearly wanting to hold it, and Shota shows it to her. “You want to hold this?” He asks, and she gives a small nod. “Well, you can’t,” Shota responds, then hides away the gift. It is a moment that made me laugh out loud because it was so genuine, such an honest moment that shows siblings will be siblings, no matter the circumstance. Other standouts were Mayu Matsuoka as Aki, a young woman dealing with her own blossoming emotional issues as a sex worker, and Kirin Kiki as the unassuming grandmother who pulls most of the financial weight.

Sakura Ando gives one of the most emotionally complex performances the world has seen with her role as Nobuyo, a relenting new mother to the young girl. At first, we are led to believe that she doesn’t want this child, it’d be too dangerous, they’re putting too much at stake, but she quickly latches onto Yuri. There are few words to describe the detailed emotion Ando brings to this film and the fascinating role she played within the family dynamic- but in the end, it is love. Nobuyo loved in this film, and it was enough.

Producing a film about financial struggles in the midst of an aggressively capitalistic world seems to be a risky thought, but Shoplifters is a warm-hearted family feature disguised as a movie about petty theft. The characters show mild concern about money and where they are going to get more of it, but every moment the characters spend on screen together are enjoyable in all senses of the word. They like each other, a rare family dynamic on screen, and it does the soul good to watch a father roll a snowman together with his son, or a family jump waves together on the beach. This relentlessly unassuming love is the key element of the family dynamic in Shoplifters.

There is an abundance of things that kept the fictional family members of Shoplifters together: need, love, commonality, community, money, and lack thereof. It did not matter in the end what physical ties they had to one another, it was simply enough to sit together and find love where they could. In a world where financial problems loom as the ever-impending burden, Shoplifters was a rush of good feelings and tender emotion, both of which are difficult to come by for a small price. This unconventional family reminded us all that we do not have to be whole to be fulfilling, and spending our entire lives seeking that “other half” will leave you tired and alone. Shoplifters is an absolute must-see for anyone who needs a tight hug, a good cry, or an amazing movie to watch.