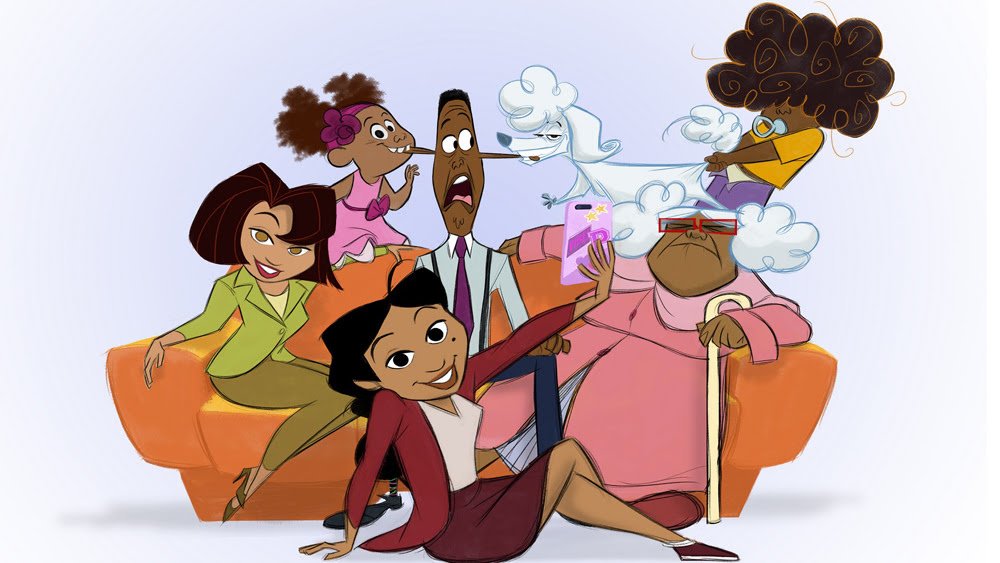 ​The Proud Family was an animated series that ran on the Disney Channel for four years, from 2001-2005. Starring Penny Proud, the series surrounded the daily happenings of Penny and her chaotic family. Fans rejoiced when they saw The Proud Family series available for streaming on Disney+ when it launched late last year but will be even prouder to hear of its impending return! In today’s society where it is somehow acceptable to discriminate, The Proud Family: Louder and Prouder is a much-needed dose of inclusion. It will be welcomed with open arms by fans from its original release and warmly embraced by a new generation of Sugar Mama lovin’ kiddos.

Cartoons in general are notorious for inherent racism while portraying black women, but The Proud Family forged a new path, somewhat of an allergic reaction to the racial prejudices once common in our society. Penny Proud is a solid role model for young children of any race or gender because she always ended with the right decision and made sure to stay true to her inner self and the beliefs and values of her loving family.

Proud to Be Louder and Prouder

The Proud Family was celebrated during its first run in the early 2000’s for being one of the first animated series to revolve around an African-American family. While the animated family was close and supported one another through the daily nuance of craziness, it seems the voice actors who gave life to the animated family feel the same.

They are all returning to breathe life back into their respective characters: Kyla Pratt as Penny Proud, Tommy Davidson as Oscar Proud, Paula Jai Parker as Trudy Proud, Jo Marie Payton as Suga Mama, Karen Malina White as Dijonay Jones, Soleil Moon Frye as Zoey Howzer and Alisa Reyes as LaCienega Boulevardez and Cedric the Entertainer as Uncle Bobby Proud. All of the original Proud Family episodes are available on Disney+.​

Battling stereotypes and pushing boundaries, animated series centering around African American characters were, and still are, a rare commodity. From Fat Albert and The Cosby Kids, to The PJ’s, The Proud Family revival will shine a much-needed spotlight on an underrepresented culture which makes up a huge part of modern society. I wish the conversation revolved around a different characteristic other than the color of the cartoons’ skin but ignoring it would contribute to the “turning a blind eye” culture that we need to distance ourselves from.

There is no denying a cultural/race disparity in the United States, many of which fall victim to pre-conceived judgment and unwarranted generalizations. What kind of adverse reactions could this send to the youth of our nation? The lack of colored representation in pop culture is an unfair issue in itself. We cannot be the generation who re-ignites and perpetuates racial stigmas. Our place in history on a timeline of acceptance can change for the better if we learn to embrace the differences of our peers. Remember, “We’re All in This Together”, as High School Musical preached.

The revival of The Proud Family is apropos for the House of Mouse. We are knee deep in the age of the remake, with Cinderella, Dumbo, Aladdin, and others already under our movie viewing belts. This also follows the trend of reviving animated gems of years past, such as 2017 revisit to the football head himself in Hey Arnold!: The Jungle Movie, and the notoriously rumored Rugrats revival. The Proud Family’s approach on handling the experiences of a teen girl come from a thoroughly thought out team of writers and developers who know just how to engage the audience of young viewers and convey ethics and dignity.

Penny Proud should certainly be proud of the role model she has become, and the demand for more of her stories should be indicative of this. Each family member is relatable in some character aspect or another. Putting ourselves in Penny’s shoes, we can all think of a Sugar Mama in our lives who is equal parts crazy and nurturing, wild but wise. The natural father-daughter bond between Penny and her father is so endearing, yet so accurate in the way that it is dealt with realistically. Her father is a source of strength and wisdom, yet he doesn’t quite grasp his role in her life. It seems he navigates gently, but in turn has such a strong impact on Penny’s moral dilemmas. It is a relatable father-daughter relationship and sets the example for a healthy familial story arc for viewers from ages 10-100. Proud Family is definitely worth the watch.

Will you be watching The Proud Family: Louder and Prouder when it becomes available for streaming on Disney+?