Nick Offerman: 32 Facts on the Comedic Genius and a Living Rustic Folklore Hero 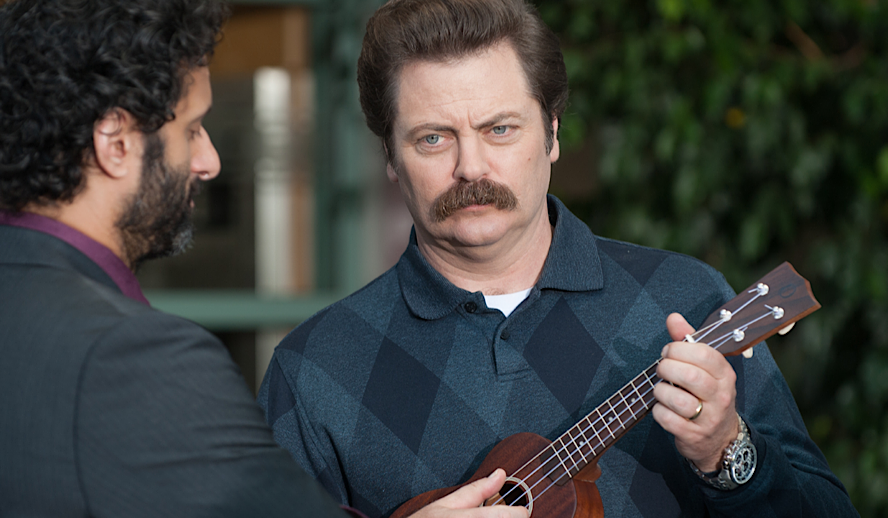 Nick Offerman is an acting legend. Though many know him for his role as the embodiment of stoicism, manliness, and dead-pan-ness in ‘Parks and Recreation’, Ron Swanson has had roles in everything from dramas to animation. That is when he’s not spending his spare time woodworking or, I don’t know, wrestling bears probably.

I sincerely hope Nick Offerman came out of the womb speaking in that silky rich baritone voice and sanding down a rocking chair he made by hand in utero. If he did so, it didn’t happen in New York or LA. Offerman entered this world in Jolliet, Illinois, a town whose most famous feat is how impressively unremarkable it is.

I’m sure Offerman’s parents were great, but their job titles didn’t exactly scream “my son’s going to be a future acting legend!” His mom was a nurse and his dad taught social studies.

#3- When he graduated from college, he started a theater company.

Most recent college grads have no idea which direction to go, but Offerman and his friends knew exactly what they wanted to do with their life, as they founded Defiant Theatre the same year they graduated. And you know a theater company means business when they put the R before the E in “theatre.”

#4- He had some unexpected jobs in other theater troupes.

Offerman spent a good portion of his twenties in Chicago. Here, he performed with several theater troupes. In one of them called Steppenwolf, Offerman channeled his inner Ron Swanson and became the troupe’s master carpenter and fight choreographer.

Matt Offerman has had roles in movies like ‘Live Nude Girls’, ‘Pee Shy’, and ‘LA Paranormal’.

Based on his performance as Ron Swanson, my guess would’ve been that Offerman would have preferred wrestling buffalo or bare knuckling deer into submission as his sport of choice. But no, apparently he’s a baseball lover and a huge Cubs fan.

#7- He met his ‘Parks and Rec’ co-star while living in Chicago.

#8- He’s always been talented as a supporting actor.

Years before he took on the supporting role of supporting roles on ‘Parks and Rec’, in 1997, Offerman was awarded the Joseph Jefferson Award for Best Supporting Actor for his role in the play ‘The Kentucky Cycle’.

#9- He also won an award for Puppetry.

A year after his supporting actor win, Offerman and the rest of the Defiant Theatre troupe took home the Joseph Jefferson Award for Masks and Puppetry for their performance in ‘The Skrinker’.

#10- He’s married to an actress from another famous sitcom.

Offerman is one-half of a legendary sitcom couple. In 2003, he tied the knot with Megan Mullally who is known for starring in the classic sitcom ‘Will and Grace’. It’s a match made in sitcom heaven.

#11- Megan Mullally thought Offerman was older when she met him.

Something tells me Offerman came out of the womb offering life advice to grown men. He’s always given off a very mature vibe. Therefore, it’s understandable that Mullally thought the 29-year-old was at least in his mid-thirties when she first met him.

#12- You might have seen him guest star on some of your favorite TV shows of the early 2000s.

Before he hit it big with Parks and Rec, Offerman picked up several guest-starring roles in some popular 2000s sitcoms. These included a spot on his new bride’s show ‘Will and Grace’ as a plumber. You think Mullally would have swung him a slightly more glamorous role on her show but… He also appeared on ‘King of Queens’, ‘The West Wing’, and ‘George Lopez’.

Offerman showed off his woodworking skills in an episode of ‘Last Call with Carson Daily’.

#14- He was offered his role on ‘Parks and Rec’ by two sitcom writing legends.

As the first decade of the 2000s was winding to a close, Michael Shur and Greg Daniels approached Offerman about playing Ron Swanson on ‘Parks and Rec’. Shur and Daniels also served as the creators of the trailblazing sitcom ‘The Office’.

#15- NBC execs weren’t impressed at first by his audition for Ron Swanson.

Fortunately, Allison Jones managed to convince them Offerman was perfect for the role.

The idea for ‘Parks and Rec’ started as a shameless copy of ‘The Office’, with Rashida Jones reprising her ‘Office’ role as Karen. Fortunately, Daniels and Shur realized Parks and Rec’s potential as its own entity, but there was one connection some of the writers still wanted to make. There was going to be a subplot in which the copier in the Pawnee Parks and Rec department never worked. The copier would have been made by a paper-supplying company we all know and love.  Unfortunately, the brilliant Easter Egg for eagle-eyed fans was scrapped.

Nick Offerman did more on ‘Parks and Rec’ than just play the man who gave a middle schooler a probably deactivated explosive just because. He also is credited as a producer on the show.

#18- Slate magazine appreciated his performance on ‘Parks and Rec’.

The publication referred to Offerman as ‘Parks and Rec’ secret weapon, giving a special nod to his understanding and mastery of physical comedy.

#19- He got creative with the souvenirs he got to take home from the set of Parks and Rec.

In fact, Offerman turned many used props and set pieces into woodworking projects.

#20- He loves woodworking so much, he made a business out of it.

Offerman Woodshop has a website if you want to purchase some artisan pieces crafted by the hands of Ron Swanson himself.

#21- Just to be clear, he owns the manliest woodshop in existence.

Offerman Woodshop specializes in boat-making which Offerman is specially certified for. So yeah, it’s not some lightweight, pansy woodshop we’re talking about here.

#22- The official dog mascot of Offerman woodworking is not the breed you’d expect.

While Offerman has shown his love for many different dog breeds on and off the red carpet, the official pet/mascot of Offerman Woodworking is Baloo who is a poodle mix.

#23- He provides the voice-over for the Fremulon Productions vanity card.

You know the card that comes onto the screen after every episode of ‘Brooklyn Nine-Nine’ that you watch letting you know the show was made by Fremulon Productions and then a booming voice declares “Fremulon!” from your TV speakers? Fremulon is a company owned by the aforementioned Michael Shur, and that voice that sounds like it can command an army if the only word army generals needed to shout was “Fermulon!” belongs to none other than Nick Offerman.

#24- He doesn’t want to be the center of attention.

Offerman said that his ideal role is part of the supporting cast. His role model is Christopher Lloyd because of his supporting performance in ‘Taxi’.

#25- He is a surprisingly good dancer.

He showed off his moves in a 2013 episode of ‘Late Night with Jimmy Fallon’.

Offerman showed off on ‘The Late Late Show with James Corden’ that ballet is not the dainty dance we all thought it to be. Offerman makes anything he touches seem manly and he proved to us all that ballet is more than just swans in lakes and sugar plum fairies.

#27- He performed a one-man show at New York’s City Hall.

Offerman performed songs, told a series of anecdotes, and gave advice on woodworking techniques because… why not? Why did he need to do it at City Hall? Because he’s Ron friggin’ Swanson, that’s why.

#28- He played a very successful man.

In 2016, Offerman played the co-founder of McDonald’s, Dick McDonald, in the dramatic biopic, ‘The Founder’.

Apparently, Offerman is, even more, the living embodiment of Ron Swanson than we thought. He DIYs the crap out of every piece of furniture in his house.

#30- He played a man with the most braggy name ever on ‘Drunk History’.

Johnny Cool was an arsonist who took pride in his work, as any good pyromaniac for hire should. He burnt down a hotel and watched it turn to ashes in the “Boston” episode of Drunk History.

#31- He played himself in an episode of ‘The Good Place’.

Offerman played a dead version of himself in the series finale of ‘The Good Place’.

Offerman played Metal Beard in ‘The Lego Movie’ in addition to contributing his voice talents to ‘Gravity Falls’, ‘Ice Age: Collision Course’, and ‘Sing’, along with others.