Joe Pera Returns To Talk With Us 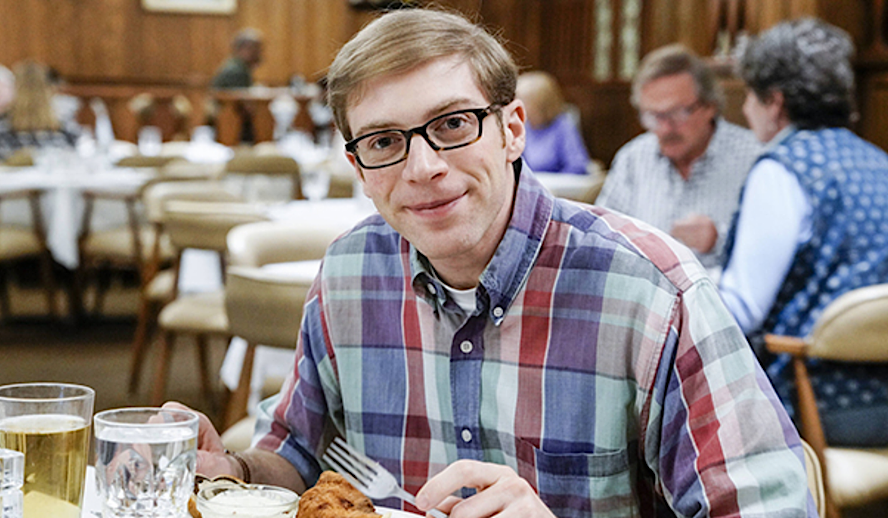 Joe Pera: the Man, the Host, the Legend

Joe Pera, the character not the comedian and creator of the series, is a middle school choir teacher in Michigan‘s Upper Peninsula. He talks to the audience via breaking the fourth wall and often discusses mundane topics like fireworks, Sunday breakfast, and comfy chairs. He is both naïve and socially awkward, but this all comes across as more charming than ever. The series follows Joe Pera as he goes on mundane adventures with the members of his small town, from babysitting a neighbor’s child to discovering a new song (the Who’s ‘Baba O’Riley’).

Joe Pera is a charming and lovely presence for a show to focus on. Joe Pera acts as a modern and alternative Mr. Rogers in the sense that they both teach life lessons to their audiences, but while Mr. Rogers teaches kindness to children, Joe Pera teaches kindness to adults. Some of the highlights of the series are Pera’s rambling nature, where he will one minute discuss the beauty of nature, and the next minute he’ll discuss what he buys at the grocery store. Listening to Joe Pera talk is like listening to your grandfather talk over a warm bowl of soup. This isn’t a bad thing either and Joe Pera prides this about the show as well as about his persona.

Comparing a show to eating soup with your grandfather might not sound interesting, but this is what makes ‘Joe Pera Talks With You’ so refreshing. Unlike so many comedy shows that are on right now, there is no irony or cynicism, or sarcasm. Instead, much of the humor of the show comes from its witty writing and from Pera’s enthusiasm towards the little things in life. This series wouldn’t be as successful if it wasn’t for Pera himself. It’s hard to tell whether Joe Pera is acting as a character or if he really is his character and this just proves the quality of his performance. Joe Pera’s persona is just so endearing and lovable that he steals the show, which is interesting since he doesn’t have a leading man’s style. Unlike most leading men, Joe Pera isn’t loud or cocky, or even confident. Joe Pera is so appealing because he subverts the typical leading man formula and instead shows us the beauty of kindness.

The first episode of season three follows Joe as he goes furniture shopping with his friend, Gene (Gene Kelly). The wholesome episode, which ends in Gene getting a job at his favorite furniture store, has a pretty major reveal: this season, despite premiering this year, takes place in 2018. 2018, before the awfulness of the Covid-era reared its ugly head in. This reveal adds to the more wholesome feel of the show since the series takes place right before so many miserable events took place. This isn’t to say that 2018 was an ideal year either since certain people who shall not be named were in office, but 2018 was still before a lot of dreadful things came to a head.

Joe tends to look at life through rose-tinted glasses, finding beauty in everyday situations, but the series itself does not do this. While the series takes place in 2018 to avoid the depressing aspects of more recent years, the series still makes it a point to show that not every aspect of life is beautiful. This is achieved with the character of Sarah (Jo Firestone), Joe’s love interest. Sarah works at the same school as Joe and is fearful of the future state of the world. She is the exact opposite of Joe, where while Joe is hopeful of the world, Sarah dreads what the world can become.

The second episode of season three, ‘Joe Pera Shows You How To Make A Fire’, perfectly balances Joe’s hopeful outlook on the world and Sarah’s fears. After the rampant news of school shootings (2018 was the year of the Stoneman Douglas shooting), Sarah grows fearful of her job and runs away into the woods with Joe. It’s great that the episode used the characters’ roles as teachers to explore how they were just as afraid as the students during this terrifying time. It’s also great that the series, which tries to look at the beauty of life, didn’t shy away from such an important issue. It would have been so easy for the show to look at 2018 through rose-tinted glasses like Joe’s character, but the series instead takes a moment to show that not everything is perfect.

This doesn’t mean you can’t still enjoy life. Throughout the episode, Joe enjoys the simple act of building a fire in the woods, while Sarah is too stressed to enjoy anything. The simple act of making a fire soon teaches both Sarah and the audience that the world may be scary, but sometimes you just have to take a moment to do something that will give you joy. In the year 2021, maybe that’s a lesson we all need to hear right now.

‘Joe Pera Talks With You’ is a delightful reminder to appreciate the mundane things in life, the things we take for granted that Pera can ramble on and on about. Pera is not your typical leading man, being much gentler and calmer, especially compared to other characters on the Adult Swim series. He subverts our cynical expectations at every corner, being such a breath of fresh air in a landscape that is polluted with sarcasm and irony. ‘Joe Pera Talks With You’ might not be for everyone, it is an Adult Swim show after all and they tend to make shows for a more alternative and contemporary crowd, but if you’re part of this crowd and need something more positive after the awfulness of 2020, then Joe Pera is here to talk with you.