‘Flora & Ulysses’: Charming, Endearing, and Action-Packed, The Superhero The World Needed Most 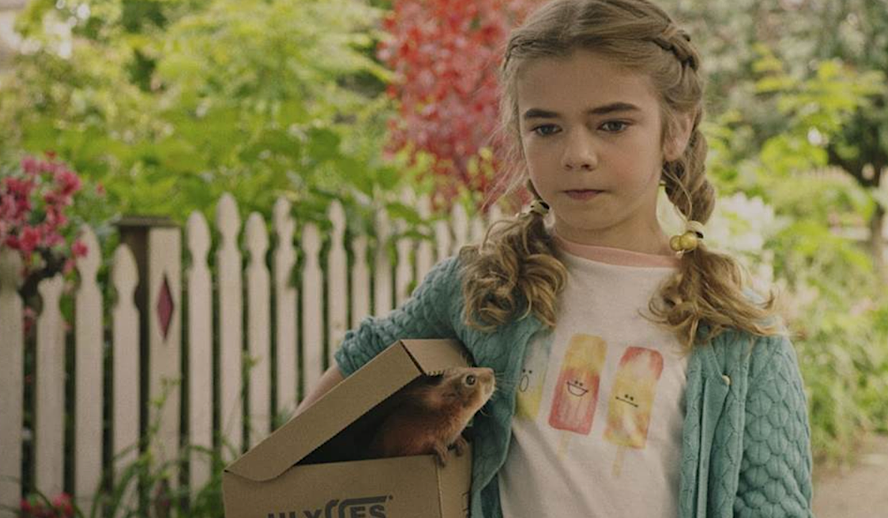 Ten-year-old, self-proclaimed cynic Flora Buckman has stopped believing in the stories from her comic books. Her father, a once-aspiring comic novelist, has long since stopped trying to get his work published and now haunts the aisles of Binders, Keepers after leaving her mother. Chasing a romance novel that might not ever come, her mother clings to vintage artifacts and her precious ‘Jack and Rose’ award- the relic of her now burnt-out writing career. Superheroes don’t exist, Flora has decided. Nothing can save her family now.

Related article:  New Releases: Your Comprehensive Guide to Every New Movie Coming Out in February 2021

That is, of course, until a poetry-writing, flying, and super strong squirrel is saved from the disparaging hands of a robot vacuum and sets out to change Flora’s life forever. ‘Flora & Ulysses’ is the most recent DCOM (Disney Channel Original Movie) introduced to Disney+ on February 19th, and it succeeds any expectations one would have for a family-friendly movie. Genuinely drawing out hearty laughter, a whip-smart narrator and lead character, and an unexpected story of families who fall apart and how they come back together, ‘Flora & Ulysses’ deserves to be a story that lasts a lifetime.

The Evolving Landscape of Children’s Cinema

It’s no secret that film and television for children grow more sophisticated with each passing year, but this film truly blew me out of the water. ‘Flora & Ulysses’ finally walks the perfect line of creating a strong female lead that is both wise, charming, and still revels in the precious child-like joy most narrators are forced to abandon. This almost certainly is thanks to the admirable efforts of director Lena Khan (The Tiger Hunter), who proves that you do not have to sacrifice likable, realistic elements to create a spunky main character for young girls to admire. Flora, in ways, reminded me of Captain Marvel (another Disney-led franchise)- she was strong and fierce, but grounded in the ones she loves and wanted to protect.

Another commendable element of this film was the elimination of the classic parent-child divide. In a movie like ‘Flora & Ulysses’, it would have been so easy to have her parents dismiss the idea that a squirrel could soar through the air and write meaningful poetry about how hungry he was, but screenwriter Brad Copeland expertly avoided this tired trope. Perhaps it was the wonderment of Flora’s father, the failed superhero author, that makes this film so endearing to adult audiences. Flora and her father bonding over the unlikely hero is a gentle reminder of the dreams adults tend to let go with age and the nudge of realism clawing at your back.

The Super Cast of Characters

There was perhaps no young actress as suited for the heroic role of Flora Buckman than the incredible Matilda Lawler, who will quickly charm her way into your heart. For a ten-year-old character, Lawler played Flora with a wisdom beyond her young years and held that incandescent spark necessary for a plot so far-fetched. Her work with a CGI squirrel and the outlandish escape from Animal Control was better than most of the critically acclaimed work we’ve seen in the past decade. Ms. Lawler deserves high praise for her breakout performance in ‘Flora & Ulysses’.

Ben Schwartz and Alyson Hannigan play George and Phyllis Buckman, and what a true gift their performances were. Watching their story, two young writers trying to find success in an increasingly competitive industry while caring for their daughter, felt like unwrapping a present on Christmas morning. Schwartz strayed from his usual sort of character- the Jean-Ralphio, F**k Tony, and Clydes of fiction and fantasy- to bring us a tender, kind-hearted man who cares desperately for the family he doesn’t know how to fix. The on-screen chemistry between Schwartz and Hannigan was surprisingly enchanting for a Disney original, and I can only hope that we get more from the pair, and soon.

A Book-to-Movie Adaptation We Can All Applaud

Based on the book ‘Flora & Ulysses: The Illuminated Adventures’ by Kate DiCamillo, it is no wonder that this movie turned out to be so heart-warmingly successful. Author of other childhood favorites such as ‘The Tale of Despereaux’ and ‘Because of Winn-Dixie’, DiCamillo is a multiple-time Newbery Medal winner and a former US National Ambassador for Young People’s Literature. In both the novel and the film, Flora is learning how to live with her parent’s recent separation when she comes across the mighty Ulysses; The film, however, divulges on a path that is less focused around Flora and her mother, choosing to focus on “fixing” Flora’s world and bringing back the normalcy she so craves. Phyllis Buckman, Flora’s mother, is one of the main antagonists of the young adult novel as she fights to get rid of Ulysses, leading Flora to believe she doesn’t really love her. In the film, the evil animal control specialist Miller is tasked with finding Ulysses and ultimately killing him while Flora and her father desperately try to hide the squirrel from his wrath. ‘Flora & Ulysses’ is one of Disney’s first book-to-film adaptations that is undoubtedly worthy of high praise.

Every once in a while, an unassuming film will come along and change your world for the better. I believe ‘Flora & Ulysses’ is absolutely one of those movies. Adults so often lose the ability to find pure, mindless joy in a film, so they turn to criticism because they cannot understand the life this kind of movie can provide. ‘Flora & Ulysses’ is not about an average squirrel-turned-superhero, it is the moving story of family, loss, and the ways we put ourselves back together. Before everyone is so quick to judge this film on the child-like quality itself, I hope we can all stop to marvel at the abundance of delight it provides. I hope that young women everywhere see this film because it is a reminder that not only are we able to save our own day, but it also takes a group of people you can rely on.

‘Flora & Ulysses’ is available to stream on-demand, now on Disney+.