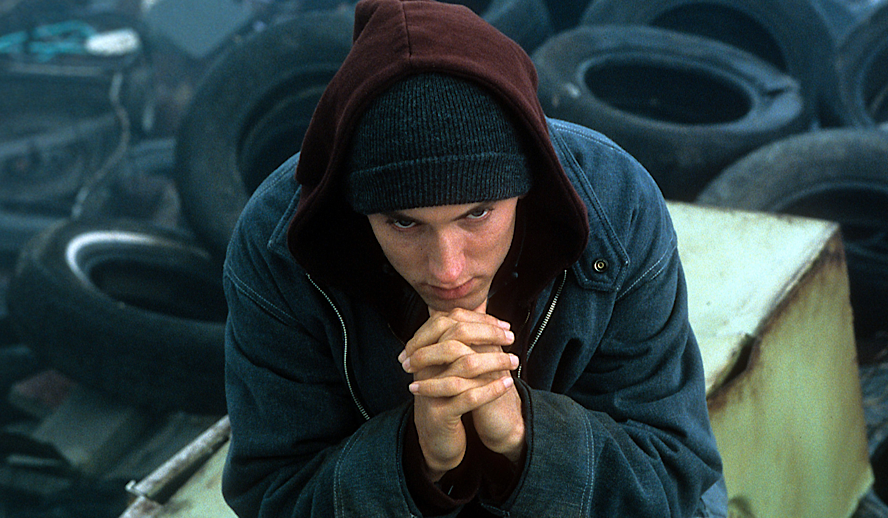 There was an old YouTube video that contained a hip-hop special of the 90s. The video was a copy of the original MTV broadcast that gave a small history lesson on the genre. They talked about many rappers, musicians and how hip hop came to be, and at the end, there was a small section that included commentary discussing the future of the genre. Some rappers named in the video as the “future of hip hop” have disappeared from the entertainment industry entirely, but one that stood out and continues to bring music to the world is Eminem. On his 49th birthday, it seemed only ideal that we recount a bit of his career and his successful acting debut in ‘8 Mile.’

The Future of Hip Hop

In the late 90s, Eminem was coming out of the underground and evolving into the artist we know today. The major players had already labeled him as the “future of hip hop.” Eminem was earning the title of lyrical genius, while also gaining respect from many of the leading names in the hip hop industry.

It feels like Eminem showed up right on time. Musicians like Tupac, Biggie, and MC Hammer, had paved the way to prove to the world that hip hop could lead as a genre just like Pop and Rock ‘n’ Roll did. By the time Eminem sprouted out from the basements of Detroit, hip hop had officially crossed over into the mainstream media. Giving the young rapper leverage to become whatever he wanted.

Eminem started his career by competing in rap battles in the underground scene in Detroit. Having been a “white boy,” he had to work harder to prove to himself and everyone around him that his music was as good as any other rapper, breaking racial barriers in the hip-hop genre. He created a style that had not been heard before, as he quickly realized that the common themes that accompany the genre were not relatable to him. Instead of forcing a narrative far from his reality, like talking about gangs, Eminem opened up about his life and his experiences with struggling as a blue-collar male who lives in the bad sides of town.

The honesty found in Eminem’s lyrics is what made him pop out from the bunch of dreamers. As he grew into his style, he found that creating alter egos helped him immensely, serving him with the freedom he did not feel previously. “The Slim Shady LP” was Eminem’s major-label debut album that introduced thousands of future fans to the rapper. Being Slim Shady permitted him to express himself with anger, irony, and sarcasm, creating a unique style that would represent him throughout his career. Many disliked the constant use of sex and violence found in his lyrics, but Eminem kept true to his thoughts and continued to make music. While growing into his style, Eminem also found that comedy was a great storytelling tool that could help him create unique pieces of music.

It is widely known that Eminem was discovered by Dr. Dre, the King of hip hop himself. Dr. Dre was introduced to Eminem’s music after an Interscope Records intern found Eminem’s demo tape and decided Dr. Dre needed to hear the guy behind the demo.

It was in 1999 when Eminem’s album “The Slim Shady LP” was released. The album introduced a sadistic comedic violent voice that had no filter, making the crowds go wild. That same year, his LP went multi-platinum, garnering Eminem two Grammy Awards and four MTV Video Music Awards. It seemed that the young rapper had a very bright future ahead. Then, it was no surprise when Eminem was offered to be part of a semi-autobiographical film about his life.

‘8 Mile’ began production in 2001. The film depicts a young Eminem playing the role of B- rabbit, a white rapper trying to make it in the dark streets of Detroit. After B-Rabbit “chokes” in the middle of a rap battle, the film takes us on a path to discover who this character is. The aesthetic gives an urban perspective, as each character struggles financially and tries very hard to get out of that town. ‘8 Mile’ has many plot points that are similar to Eminem’s real upbringing.

The title is inspired by where the film takes place. “8 mile” is the division on the freeway in Detroit, where the city is divided between white suburbia and the black ghettos.

Anything But An Amateur

Eminem surprised his followers, as he was anything but an amateur when it comes to acting. His passion is felt through the screen. It was apparent to the producers that Eminem was a classic storyteller. He could deliver in any media. Other actors experienced the first prominent roles in this film, such as Brittany Murphy, who, after her lead in ‘Clueless,’ this character was a total 360, and she did not fail to deliver. Also, the film was the home for Anthony Mackie’s first movie role, ever!

B- Rabbit was no different from Eminem, as he also found that he would only gain respect by winning. In a predominately black industry, B-Rabbit wants to show the world that he is not the guy who “chokes” in front of a crowd. In the end, he realizes that his flaws were not really flaws, but a weapon to use to his advantage.

The Song, The Soundtrack, The Academy Award

Eminem did not only act, but he was actively composing songs for the film’s soundtrack. While shooting ‘8 Mile,’ he created the song “Lose Yourself,” along with Luis Resto and Jeff Bass, a song that was later nominated for best original song at the Academy Awards. The song was a commercial success, along with the film’s soundtrack. “Lose Yourself” won the Academy Award, turning Eminem into the first rap artist ever to win an Oscar.

After the film was released in 2002, it was an automatic success in the box office, opening at number 1 in the U.S. ‘8 Mile’ was named one of the best films of 2002 by many publications.

It’s been nineteen years, and the film continues to be relevant in popular culture. The line “mom’s spaghetti” from the “Lose Yourself” song on the film’s soundtrack has been relived to be adapted into memes and comedic videos. The film is known for having collected a serious streak of cult followers, who swear by the film to this day. The rawness seen through the screen and the uninhibited way the actors approached their characters made ‘8 Mile’ a millennial classic.