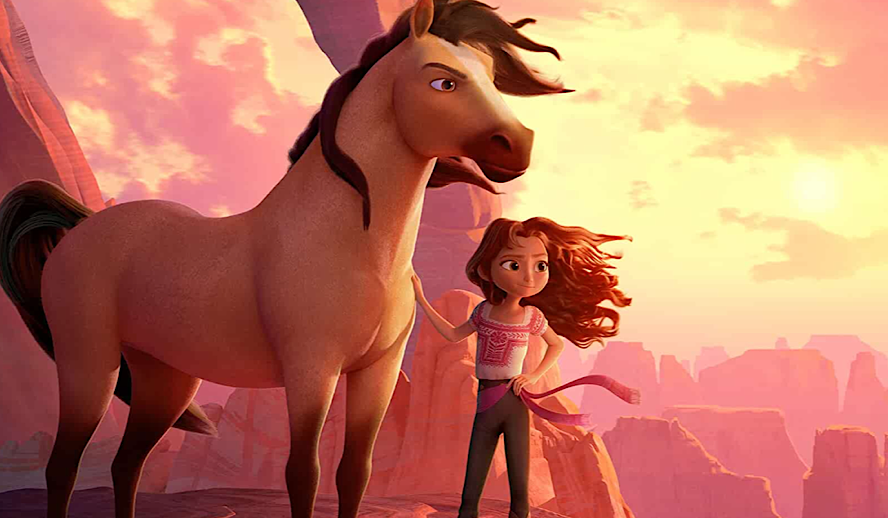 The More Stars, The Better

Get ready to ride with the Dreamworks animated film, ‘Spirit Untamed’. This film is meant to be a sequel to the beloved and severely underrated animated film, ‘Spirit: Stallion of The Cimarron’, and also the Netflix adaptation ‘Spirit: Riding Free’. The film had been released in theaters on Friday, June 4th. The Dreamworks website has a list of all the theaters where the film will be screened, along with the showtimes.

Reportedly, the film is expected to be available to stream in the upcoming weeks. The film’s director, Elaine Bogan, has been involved with many Dreamworks productions in the past, doing storyboarding for the animated films, ‘Megamind’, and ‘How To Train Your Dragon’. However, her directing credits are very minimal. She only has four animated films credited to her, with two out of those four being spin-offs or sequels. Despite this, I think she has done a relatively good job with the direction of the film and the cast she put together. The film has some big names attached to it.

Related article: A Tribute to Dreamworks: The Rise of the Animation Company that Created ‘Shrek’, ‘Shark Tale’, and ‘The Croods’

The film features many stars such as Jake Gyllenhaal, Isabella Moner, Andre Braugher, Marsai Martin, and Julianne Moore. Jake Gyllenhaal is easily the most recognizable on the list as he stars in popular films such as the 2005 blockbuster, ‘Brokeback Mountain’, ‘Nightcrawler’, and the enigmatic 2001 cult classic ‘Donnie Darko’. Despite Gyllenhaal being the biggest name of the cast, he is definitely not the only face we know and love. Audiences may also easily recognize actor Andre Braugher as Captain Holt in the 2013 police comedy series, ‘Brooklyn Nine-Nine’.

Julianne Moore is most known for her roles in ‘The Hunger Games’ franchise, the ‘Jurassic Park’ franchise, and her role as Margaret White in the 2013 ‘Carrie’ remake. Actress Marsai Martin has hit the spotlight in recent years with her memorable roles in the 2019 comedy ‘Little’ as well as her role as Diane Johnson in ABC sitcoms, ‘Black-ish’, ‘Grown-ish’, and ‘Mixed-ish’. Another actress that has been in the spotlight as of recently is Isabella Moner. She is best known for her portrayal of Dora in the 2019 live-action Dora film, ‘Dora and the Lost City of Gold’. The cast is packed with loads of talent from totally different genres of film. It would be interesting to hear how their voices coexist in this relatively warm, child-friendly film.

An Abundance Of Girl Power

The film’s storyline follows the journey of a young girl, Lucky Prescott, who moves from a city to a frontier town, where she befriends a wild stallion called Spirit. Trouble arises when Spirit is threatened by wranglers who plan to take him and his whole herd. It’s up to Lucky and her friends to save Spirit and his herd. There isn’t anything too complex about the film which makes it perfect for children to follow. I can appreciate the brief nod to Mexican heritage and the emphasis on girl power within the film. There were a lot of critics that expressed how weary they grew on the theme of female empowerment, but I will personally never get tired of girls being put in male spaces, such as adventure.

There are moments in the film that I would say are not very appropriate for a young child to see, for instance, death very early on in the film. However, I will acknowledge that this isn’t a new scene for a child-friendly film. In films such as this, a loss is a theme that happens after establishing a brief relationship with a character and is used as a plot device for the protagonist’s journey. I can’t even think of a child-friendly film that doesn’t involve death in one way or another. Although I don’t necessarily agree with this method of storytelling, I can’t pretend that this film is the first. Another qualm I had about this sequel is the style of animation.

The animation of this film differs from the original hand-drawn style and instead takes on the modern computer-animated style. The animation is similar to the style that Disney princess shows such as, ‘Elena of Avalor’ and ‘Sophia The First’. I wouldn’t have even thought Dreamworks was behind this, given that their animation is usually very polished. I would say the appearance of this film is attractive but in some ways looks unfinished. I’m not sure if that was an artistic choice or if the budget just wasn’t as big as say, Disney’s ‘Frozen’ or ‘Tangled’. Either way, it felt more like a series than an actual film.

I will admit, I have a tendency to be hypercritical of reboots or sequels to my beloved childhood films. I knew that I was going into this with the intention of ripping it apart. I had to stop and think about what this film is really about. I had to switch up my mindset and found that the film was actually pretty good on its own.  It would be easy for me to dismiss this film because of what I remember as a child, from the original ‘Spirit: Stallion of The Cimarron’. I could go on and on about how I personally felt it did not do much justice for the original. Many critics would probably blindly agree with me as well.

However, I have to keep in mind that this film was intended for the children of today. That is their target audience. It just isn’t about me. The purpose of this film is not to provide me, a grown woman, with immense accuracy to the original and quench my undying need to relive my 2002 childhood. I feel that this film was actually pretty good when I stopped looking for ways to compare. Comparison forces you to long for differences, and when it’s a movie that you love, those differences may begin to feel personal. Sure this movie was different from the Spirit film that I grew up with, but that doesn’t necessarily mean it’s bad. It was cute, and I feel it would be the perfect family-friendly film to watch with your little ones.