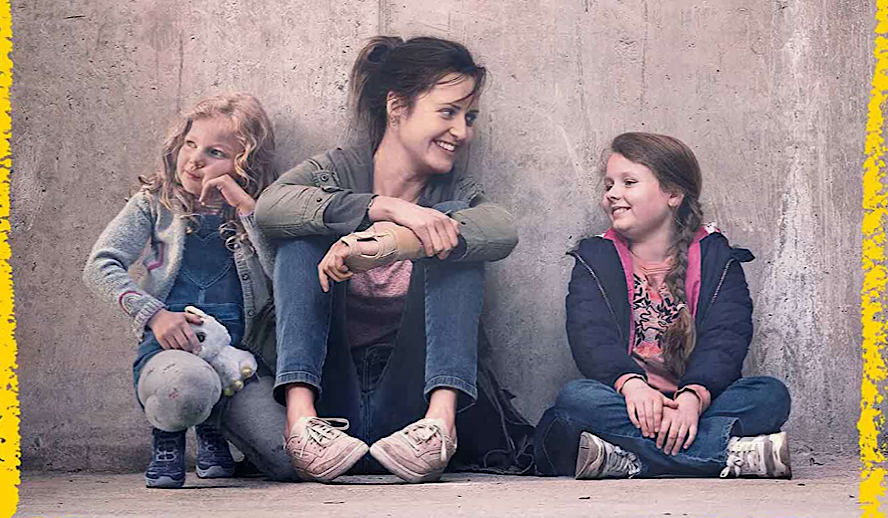 The first shot of a film is always the most important. Within the first few seconds of ‘Herself’, the camera already tells us exactly what this story is going to be about. Flanked by her two girls we discover Sandra, a mother who’d spend the entirety of the movie discovering herself and the meaning of family, as the blurred shot teaming into focus relays to us.

Guilded with a birthmark under her left eye, Sandra is played by one of the stories writers, Clare Dunne, who shares the credit with writer Malcolm Campbell (‘Skins’, ‘Shameless’).

Related article: Oscar Buzz – ‘Pieces of a Woman’: Vanessa Kirby is Powerful, Raw and Intimate in this Silent Portrayal of Tragedy

Related article: Carey Mulligan’s ‘Promising Young Woman’ Makes A Promise To All Women In Their Quest For Justice

Sharing the producers as ‘Room’, the film reeks of the same intimate flare that makes both so stunning to gander. ‘Herself’ also finds it’s lead actress trapped in impossible circumstances; in Sandra’s effort to protect her kids from her abusive husband, she embarks on the daunting challenge of self-building a home for her family. What sets this film apart from ‘Room’ is its Irish setting, and most importantly, it is realistic, sometimes relentless circumstances that encourage Sandra to become a metaphor for the strength of domestic abuse survivors.

Watching the film immediately after watching its trailer, the placement of Sandra’s birthmark actually resembles that of the infamous bruising many women struggling with domestic violence have under their eyes. Of course, since there is no universal symbol for identifying abuse, the birthmark becomes metaphorical. When her youngest daughter Molly asks about the mark, Sandra ends up telling her a tale of how God gave her that birthmark so he’d know who she was, as there are “loads of Sandras in Dublin”.

It’s an adorable story, but if you contextualize it with the idea that Sandra is a symbol, then we begin to understand more of the writer’s intention with this film. Sandra is a mother who mirrors the story of millions of mothers across Dublin, and across the world.

The story repeatedly alludes to Ireland’s ongoing housing crisis, and as we watch Sandra forage for housing for her and her children, this problem is just one of many that she grapples with. Sandra struggles with what seems to be PTSD as she tries to reconcile that her husband is no longer the person she fell in love with. This is evidenced by her hand of which he stomped, rendering it broken for the majority of the film.

She’s constantly taking pain medicine to try and muster through her two physically demanding jobs and taking care of her growing children. In Sandra, I see glimmers of my own single mother who raced up and down highways to try to get from home to my school, to work, to my after school programs, back home to cook dinner, and do it all again in the morning. It seems like Sandra’s reality is just one big circle, and as her circumstance become even more unbearable as the film progresses, love finds a way to break her cycle of suffering.

One of the jobs Sandra works is inherited from her late mother; she’s a housekeeper for an injured, cranky doctor, Peggy, a woman who was very good friends with Sandra’s mother. In their developing relationship is the breath of relief Sandra needed to bring her ambition of building a house to live in.

Before the film’s halfway mark, it has already unearthed it’s hidden, most powerful message; ‘Herself’ is more a story about generosity and healing than it is about the tragedy. Behind Peggy’s garden on her large estate, is a sizeable plot of land “going to waste”. Peggy not only gives Sandra the land but also loans her the money she needs to construct it. Sandra’s life and thus the film takes a drastic turn as the scenes fill with hope, casting off the shame of a prospect-less future for Sandra and her children.

‘Herself’ – The Meaning in Metaphors

In the construction of her new home are more glimmerings of generosity as people from all over the community come together to construct Sandra’s home. As news spreads of Sandra’s dire situation, the community coming together, volunteering to build Sandra a home, metaphorically transforms ‘Herself’ into quiet the radical picture. In a world where victims of domestic abuse are often neglected, blamed, and shamed in society, ‘Herself’ gives us a view at a community that’s discovered alternative means for how victims of abuse should be treated.

Many of the community members that assemble to construct Sandra’s house are financially insecure themselves, living in less than ideal conditions to survive. The fact that they all come together to support Sandra to build a house on land that was donated, with money that was loaned makes ‘Herself’ quiet the miraculous story, even with Sandra’s tragedies considered. While I’m tempted to be critical of such generosity on the basis that ‘Herself’s’ brilliant realism becomes compromised, I think there’s beauty in the way this story was told, and an immense amount of meaning.

As the camera dances between summer leaves and suspended beams, outlining the miracle of the construction of this house, it seems like Sandra has nearly made it out alive, and she and her children can live in their new palace happily-ever-after. Towards the end, viewers find Sandra is left with a dramatic setback that places her in a downward spiral. While it may seem like her community generosity was futile, ‘Herself’ teaches us that the meaning is not in the material.

While this movie is primarily about building a house, it really has nothing to do with the one they construct. Nestled in between creation and destruction are the elements needed to create a family. Clare Dunn is stunning. It may be due to her sharp writing, creating real people, real children; her sense of behavior, especially in the way her children are depicted in the film is impressive. Either way, there’s something keenly personal about the film. Just like it’s cousin ‘Room’, the film sparkles with truth, a feministic flare, and a metaphorical brilliance that gives it implications beyond what’s on the surface.