Colin Farrell’s ‘After Yang’: A Tear-Jerking Look into Humanity, Culture, and Family 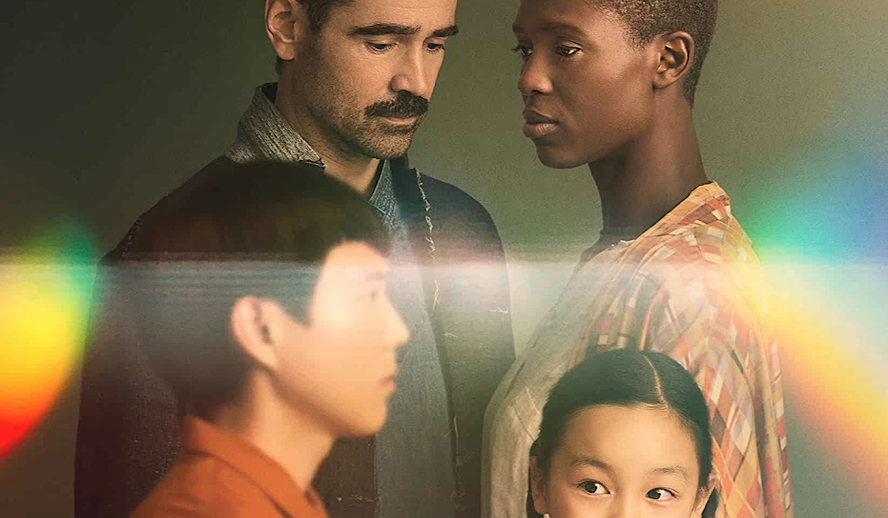 A24 has done it all. The entertainment company has brought me some of my favorite films, from ‘Lady Bird’ to ‘Hereditary’ and beyond. A24 excels at every genre, relatable comings of age, and psychological horror that haunts you for weeks; From comedy to drama to romance, you can count on A24 to bring their A-game. A24 is known for breaking the mold, reinventing genres, and looking great while it does it. The films are aesthetically beautiful and artistically directed, and their newest film, ‘After Yang’ is no different.

‘After Yang’ is the perfect balance of captivating visuals, sci-fi concepts, and an emotional story. Each and every aspect of the film blew me away, the directing, writing, and acting all exceeded expectations and created an overall intelligent and emotional experience. When going into an A24 film, I’m ready to love it; I’m expecting emotion, genre-bending, and a new favorite film. It’s rare for me to leave the theater disappointed, and I was far from it this time.

The titular Yang is an integral part of our leading family. He’s a picture-perfect brother, son, and friend. The thing is, he isn’t human. Yang is what the film calls a TechnoSapien, or just Techno for short. He looks, acts, and emotes just like a human, it’s almost startling to know that he isn’t. We meet him during a dance sequence, the entire family moving in perfect sync. A perfect family. The father, Jake (Colin Farell), the mother, Kyra (Jodie Turner-Smith), and daughter, Mika (Malea Emma Tjandrawidjaja) all continue their routine when Yang (Justin H. Min) falls out of sync. Yang’s malfunction soon worsens until he’s broken entirely, unlikely to be fixed.

The family has Yang because Mika was adopted from China. In attempts to connect her with her culture, Jake and Kyra bought a Chinese Techno, filled with the knowledge of Chinese history, culture, and language. It’s clear that Yang is Mika’s best friend; She’s young and can’t grasp that Yang isn’t flesh and bone. She understands Yang to be her brother, plain and simple. In a way, that’s all he is. He loves Mika and cares for her, they share a home and a family. Yang is there even when her parents are not. When Yang malfunctions, Mika grieves. She lost her best friend, her brother. When Jake treats Yang’s decomposing body like a household appliance that needs to be fixed, Mika is quick to resent him.

Much of the film is told through memories, both Yang’s and the family’s. Yang’s malfunction comes nearly immediately in the film, so this is the primary way we see him operate as a part of the family. We see him teach Mika about China and demonstrate how she fits into her family, even if she comes from somewhere else. We see him connect with Jake through his passion, tea, and fill in for Kyra when she works late. Yang comes across as incredibly human, he is everything a sister would want in a brother and everything a parent would want in a son. Losing Yang hits the family hard, even though he was a purchase, a piece of machinery brought into the home.

The reactions of each of the family members vary heavily from each other. Mika is destroyed. She’s too young to know how to handle the loss. Kyra is eager to move on, prioritizing caring for Mika and protecting her from experiencing even more pain. Jake, however, takes action. He channels his grief into getting Yang fixed, taking his body from specialist to specialist, searching for a second, third, fourth opinion. Everyone tells him the same thing, there is no hope for Yang. It’s an answer he won’t accept. Jake eventually gains access to Yang’s memories, a few seconds from each day he’s been “alive”. Here, he sees Yang’s friend, Ada (Haley Lu Richardson), and gains a companion in both his grief and journey for a solution.

Much of the film is understated. The color pallet is simple and earthy, Jake’s house is mostly windows and large, open rooms. The film feels very natural, airy, and light. The ritualistic nature of the film and the future it takes place in is grounded by the actor’s performances. Farrell is tragic in this role, in the best possible way. He fights to maintain hope and composure for Mika’s sake while his actual feelings spiral into grief. Farrell plays every side of Jake perfectly, the struggling father, the shop owner, and the disconnected husband. Yang, being a robot, is a much more understated character, but it doesn’t stop Min from giving a beautiful performance. Min’s understanding of Yang and his balance between human and Techno shatters the viewers’ preconceived notion that robots and humans are entirely disconnected.

Kogonada, the director, works primarily in documentary production. These unique experiences contribute to the genuine feel of the film. Despite the film being sci-fi, it feels incredibly real from start to finish. It’s treated like a documentary, in a way. It’s a slice of life, a look into a family’s home. It’s real and it’s alluring.

A Story That Needs to be Told

I highly recommend ‘After Yang’ to anybody and everybody. ‘After Yang’ is full of themes and messages that everybody can benefit from. It dives into the meaning of humanity, connecting to culture, family dynamics, grief and so much more. The future depicted in ‘After Yang’ is diverse, multicultural, and bright. Global conflicts are only seen briefly, and nobody seems to worry too deeply, unlike our current reality. The film focuses on universal truths and experiences. The variety of personalities and experiences that the film represents means everyone can see a bit of themselves in it allowing us to learn.