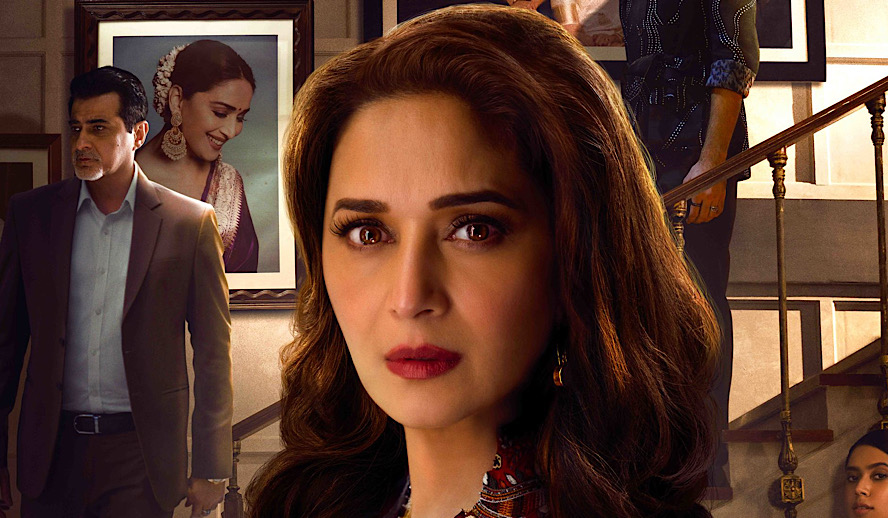 A Woman Under the Influence

I often watch movies or shows I knew at least a little something about before diving in, but ‘The Fame Game’ was a blind watch — and well worth my time, as it turned out. ‘The Fame Game’ is an eight-episode series, produced in India, which premiered on Netflix on February 25th. Within the first few minutes of the first episode, we’re told that this is a crime drama, a mystery: someone of importance has gone missing, an actress named Anamika Anand (played by Madhuri Dixit). Anamika is a famous Bollywood actress, now middle-aged, whose career has been in decline, and now she has disappeared.

Was Anamika kidnapped? Was she murdered? Did she disappear of her own volition? If you guess all three, be sure to not give yourself a screenwriting credit. Mystery lies at the heart of ‘The Fame Game’, but there is also a healthy dose of social commentary, as well as a family drama that kept me more invested than I was expecting at first; it’s not a perfect show, as I will explain by the end of this review, but it’s almost a perfect marriage between Bollywood conventions and Hollywood crime thrillers by the likes of David Fincher and Denis Villeneuve.

For the sake of spoilers, I will only discuss explicit details presented in the first episode — although that won’t stop me from hinting at future developments.

Rounding Up the Usual Suspects

The web that ‘The Fame Game’ weaves is rather complex, but let’s just say that there are quite a few people in Anamika’s life — and nearly all of them have reasons for wanting her out of the picture. The most sympathetic characters (i.e. the least likely to have committed the crime) are Ananika’s two children, Avinash (played by Lakshvir Saran) and Amara (played by Muskkaan Jaferi); both have problems of their own, with Avinash having tried to commit suicide prior to Anamika’s disappearance, and Amara having self-esteem issues as the daughter of an actress. We also have Anamika’s good-for-nothing husband Nikhil (played by Sanjay Kapoor), a failed movie producer with shady connections. The last member of the family is Anamika’s domineering mother (played by Suhasini Mulay), who acts as the real head of the household, making more decisions for Anamika’s life than the actress herself.

Keep in mind that while there is a hierarchy with how likable these characters are, none of them is entirely good or bad; even Anamika’s mom has reasons for what she does, given that her son-in-law is remarkably bad at handling expenses. To complicate things, we have fellow Bollywood actor Manish Khanna (played by Manav Kaul), a former co-star with Anamika who clearly has a deep connection with her — but of course, to give a deep dive as to the nature of their relationship would be telling. The series jumps back and forth frequently between the police investigation following Anamika’s disappearance and the months leading up to the disappearance; I’m still impressed that the show is able to do this so regularly, and so cohesively, that we’re never taken out of the action by the constant flashbacks and flashforwards.

‘The Fame Game’ – All in the Family — or Maybe Not

If you guess that Anamika’s disappearance sparks turmoil in her already-dysfunctional family, be sure to give yourself a screenwriting credit. Indeed, the show would barely exist as an episode-by-episode experience if not for the intertwining subplots with Anamika’s family; it certainly wouldn’t have the level of substance that it does. The best part is that because we’re always jumping back and forth between pre- and post-disappearance, characters will know certain plot revelations before these same revelations are revealed to the audience; this is called dramatic irony. The fact that ‘The Fame Game’ brims so much with dramatic irony reinforces one of its several themes: the secrets people keep from each other, even loved ones. For instance, certain characters know early on why Avinash tried to kill himself, but the audience is not informed until deep into the series.

Anamika’s reputation as an actress, one who is known for her beauty and performances, itself causes a great deal of trouble — for both Anamika herself and others. The show makes no bones about how it views Bollywood, both tropes often seen in Bollywood productions and the ethics of the productions themselves. On the one hand, I did find the “society is messed up” angle tiring by the fifth or sixth episode, in no small part because all these different character arcs funnel into basically the same message; on the other hand, though, it’s hard to argue that the criticism isn’t earned. The characters, in how they’re written and acted, are also give the overall message a sense of genuine weight.

Pleas for Progress and Tolerance

I know embarrassingly little about Indian culture, and I don’t know a single word of Hindi; with that said, I get the impression that ‘The Fame Game’ has a rather strong progressive stance compared to many of its contemporaries. To start, there are two explicitly LGBTQ+ characters (to say who would be telling, though), with their orientations being kept hidden for the sake of appearances. The series is openly pro-LGBTA+ and pro-feminist, given its biggest concerns and the characters it sympathizes with most; speaking of which, if you’ve guessed correctly one of the characters who is LGBTQ+, don’t forget to give yourself a screenwriting credit! More importantly, we are given such a vivid portrait of what the entertainment industry in India expects of women (including young girls) that it does end up being arresting; the grotesque portrayal of Bollywood reminds me of ‘The Neon Demon’, but surely not as depraved.

If you’re looking for the Bollywood equivalent of ‘Gone Girl’, ‘The Fame Game’ is not quite it. My biggest problem with the show is that while it tries valiantly to be a prestigious crime thriller, it occasionally slips into cheeseball moments, such as an egregious use of slow motion. I’m also not entirely convinced by the direction the last episode goes in (not spoiling it, just saying), since at first, I thought the finale would be a bit more grounded in reality; for the most part, though, this is a show that’s a good few steps away from even daring to jump the shark. I don’t have much experience with Bollywood productions, with ‘The Fame Game’ being my first front-to-back Bollywood television experience, but it made a good impression by being fairly clever and well-constructed. I watched the whole series in two days; it will probably take you only one.

‘The Fame Game’ is currently streaming on Netflix.