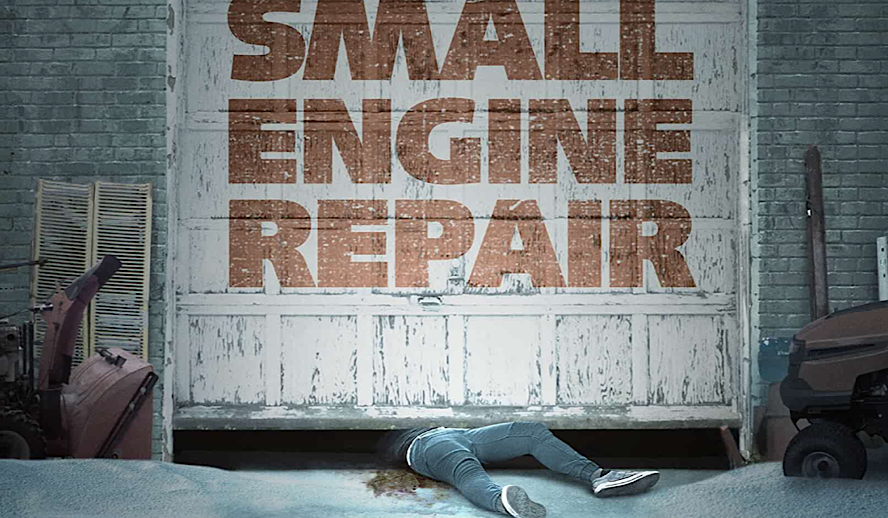 Above all else, John Pollono’s rigid and irresolute directorial debut ‘Small Engine Repair’ (2021) is a cinematic enigma. While the prospect of a playwright spearheading the filmic adaptation of their work may sound intriguing (with a vast history of scintillating successes like John Patrick Shanley’s ‘Doubt’ (2008) and Florian Zeller’s ‘The Father’ (2020)), there is always the lingering threat of directorial inexperience and dramatic overindulgence consequently obscuring the very elements that made their plays hits in the first place. While ‘Stronger’ (2017) writer Pollono does manage to issue out somewhat of a faithful realization of his award-winning 2011 play, the camera only serves to highlight the substantial contrivances and incoherencies of his original work rather than strengthening the drama and heightening the intensity.

The first-time director strikes a dissatisfying chord between formulaic roughneck mundanity and over-emphasized narrative inconsistencies, spending the film’s first two-thirds telling a movie about a divergent set of personalities than those in the last third. A larger scope to the story ultimately makes some of the film’s integral beats and supposedly shocking shifts in tone resoundingly hollow, more time spent with each character making the audience take more time to wonder why they make the hair-brained decisions that they do to guide the film to its propulsive finale. With all that said, ‘Small Engine Repair’ does offer the trio of actors at its center ample room to concoct tragic (if not always likable) figures that viewers are sure to feel sympathy for even in their darkest moments. Pollono, Shea Whigham, and Jon Bernthal deliver strong performances as the troubled trinity of “Manch Vegas” down-and-outers, serving as the film’s emotional backbone and remaining its greatest recommender throughout.

A Bemusing Puzzle Missing A Few of Its Pieces

Unlike the film’s synopsis and its confusingly specific title may lead most to believe, the first 100 minutes have nothing to do with a fateful evening hang-out at a desolate tractor repair shop. In fact, the audience is not even made aware of the garage’s existence until the beginning of the third act (the only part of the film centered on the original theatrical production). ‘Small Engine Repair’ opens on Pollono’s Frank being released from prison, his daughter Crystal being reluctantly reintroduced to him by his two lifelong best friends, Whigham’s Packie and Bernthal’s Swaino. While starting the film off on an admirably raw note, the scene is made near-incomprehensible by the fact the viewer has no idea what relationship any of the three men have to the young girl at that point in the story- or each other for that matter.

The film then jumps forward a number of years, although nothing other than Frank’s daughter (now played by ‘Cherry’ (2021) actress Ciara Bravo) and Whigham’s discomforting goatee mark that any time passed, falling back into the inconsequential day-to-day of the misbegotten gang in the dreary gray cityscape of Manchester, New Hampshire. A series of overworked familial cliches such as angst over an impending application to college and a caricature of a careless and capricious ex-wife are strung together into a very loosely connected semblance of a plot, building up to an ill-defined blow-up from Frank informing Packie and Swaino he no longer wants them in the lives of neither he nor his daughter. For the first half of ‘Small Engine Repair’, it appears Pollono took the adage “show don’t tell” a little too literally, choosing to devote what felt like the brunt of the film’s screen-time to the backstory that very well could have been summed up in one or two minutes of brisk conversational exposition.

The film then jumps forward three months, juxtaposing a jarring uptick in stylistic embellishments with a resounding downtick in the level of lightweight domestic fluff. Frank summons both of his estranged buddies to his warehouse for a night of nonchalant partying, informing the pair he has invited a mysterious teenage companion to join them as the gathering winds to a close. Enter Spencer House’s Chad Walker, a wealthy pompous student at Northeastern University summoned by Frank under the guise of selling the group drugs. As Chad begins telling the group stories of his college life. As the night goes on, Frank’s true motives behind inviting Chad to the den are revealed, challenging the bond between the group and the depths they are each willing to plunge to in the pursuit of meeting evil with evil.

The impact of the film’s final act is undeniable, shifting gears completely and issuing gruesome thrills and gripping intensity. Perhaps it is because I myself am a 19-year-old Northeastern student somewhere between 6’4 and 6’5 (although I promise that is where the similarities between myself and the character end), but the shocking direction that Chad’s role in the narrative takes and the harrowing confrontation he faces with the group – no matter how vile a person he certainly proved to be himself – wound up an unsettling sensory overload of perverse depravity. The film’s supposedly triumphant conclusion ultimately leaves a bitter taste in one’s mouth, feeling like a resounding loose-loose for both the characters and the audience by the time the credits begin to roll.

As mentioned before, the film is rescued from its worst tendencies by the three-handed acting showcase from its central triad of Manch-Vegas comrades. Not only is the film Pollono’s debut behind the camera, it is also his first official credit in front of it, more than holding his own against established screen talents like Whigham and Bernthal. Pollono manages to keep the character of Frank tethered to some degree of everyman relatability throughout and crafting a sincere paternal ferocity that oozes out of every frame he shares throughout the film. As for his two ancillary consorts, the film allows both to enjoy meatier than they are usually permitted to. While Whigham has picked up enjoyable guest stints on the likes of ‘True Detective’ (2014-2019) and ‘Perry Mason’ (2020), ‘Small Engine Repair’ sees the actor deliver his best and most memorable work since 2011’s ‘Take Shelter’. The same can be said for Bernthal, as besides Marvel’s now-excommunicated Netflix series ‘The Punisher’ (2017-2019), ‘The Walking Dead’ (2012-2022) alum has not had much room to prove himself as a capable Hollywood leading man.

The rest of the cast are all somewhat serviceable, Jordana Spiro doing all that she can with the film’s least developed adversary while Bravo’s New England accent proving one of the worst since ‘Mystic River’ premiered in 2001. Though never proving all that interesting, House’s frat-boy smarm works well enough, but the actor admittedly strikes a truly affecting desperation during the film’s most dramatic moment (only to then immediately revert back to fulsome arrogance as soon as the moment has passed).

All in all, the supporting cast faded away into the swirling grays of the humdrum New Hampshire scenery when pitted up against Pollono, Whigham, and Bernthal, leaving more than enough room for the three actors to revel in the distant world of indigent has-beens and small engine repair shops. The same can be said for the film itself, feeling more like a misguided series of half-formed ideas about the likes of digital footprints and toxic masculinity, never quite committing to the former and ultimately finding a way to directly contribute to the latter.