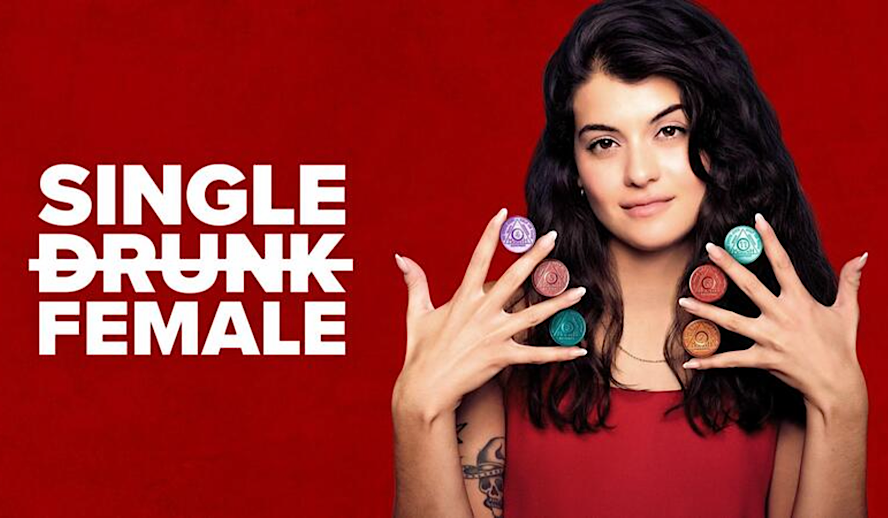 There is beauty in finding humor in times of despair, and often the greatest laughs happen in the midst of tragedy, discomfort, or pain. The new Freeform comedy ‘Single Drunk Female’, focuses on a woman recovering from an addiction, but it is paired with sharp wit and endearing characters. As the show so perfectly reminds us, it’s hard to be a person, but it’s a little easier when you get to laugh.

It’s Hard To Be A Person

The series begins with a 28-year-old Samantha Fink coming into her New York-based media job with a water bottle full of vodka. What follows is an embarrassing altercation with her boss causing her arrest. After 30 days in a rehabilitation center, Sam returns home to the Boston suburbs to live with her overbearing mother Carol (Ally Sheedy).

While she doesn’t want to participate in Alcoholics Anonymous and is hesitant to change, Sam realizes it may be for the best after totaling two cars. One of those cars belonged to her ex-best friend who is now engaged to her high school boyfriend. Sam must reckon with both her past and her future without alcohol. If she wants to get better, she has to break her routines and live life without relying on old habits. This means learning to write, going on dates, and reflecting on years of narcissistic behavior… sober.

Sofia Black-D’Elia, the actress who plays Sam, explained to Refinery29, “She used drinking as a way of self-medicating her grief, after her father passed away when she was 20. I haven’t experienced a level of grief like that, but I think we all, in one way or another, try to self-treat our trauma. And at a certain point, you have to give up the ghost and deal with it. That was something I was thinking about a lot while we were shooting.”

Her AA meetings provide a guiding format to where the show is going and what Sam is experiencing. “When she’s not arguing with her compassionately rigid sponsor Olivia (Rebecca Henderson), Sam seeks one-day-at-a-time life hacks from fellow addicts James (Garrick Bernard), her off-limits AA crush, and Mindy (Jojo Brown), who hires her to bag groceries at the local supermarket,” reviewed Entertainment Weekly.

Black-D’Elia made it clear in the interview that this is a story about hope. “I couldn’t think of a show that told a story of a young woman getting sober, going through recovery, especially not in a half-hour comedy format,” she says about what drew her to the project. “It just felt really different and unique to me.”

There is a saying when writing, and it’s “write what you know”. It means that the most powerful writing comes from real life, or at least real emotions, are attached. It’s especially important when writing about sensitive subjects that there is a deeper understanding within the writer’s room. ‘Single Drunk Female’ creator and showrunner Simone Finch, knows the journey to getting sober isn’t always easy.

After seven years in recovery, Finch is now able to use her own experiences to fuel her work. According to Huffpost, the realness of the situations at hand were not only hard to watch as an audience member, but emotional for Finch to relive. “There’s certain other aspects of it — especially with the mom character, talking about the father — all that stuff comes from a real place,” she said. “So, I cried on set a couple times, honestly.”

The half-hour dramedy premiered on January 20th on Freeform as well as available for streaming on Hulu. Black- D’Elia is truly the perfect casting as Sam. She is the pitch-perfect combination of sardonic “I don’t want to be here” attitude and an empathetic work-in-progress. Black-D’Elia said of her character to Refinery29, “With social media and the way we engage with each other, especially now in isolation, there’s so much pressure to not only have your life figured out, but to be the coolest version of yourself, and it starts to feel so inauthentic and competitive and depressing. I love that Sam is very messy and uncool.” While she has a biting sense of humor and is clearly intelligent, her alcoholism is holding her back. As she reminds her mother, addiction is a disease.

Finch’s experiences in AA, her struggle for sobriety, and needing to start over are utilized throughout the story and informed Black-D’Elia’s performance. “Between the two of us, I think that’s where Sam was born. But because I was playing a real person, I think I tried to check my ego and my own experiences at the door and embrace this world that was unique to Simone,” said Black-D’Elia to Refinery29. “I would say the relationship between Sam and [her mother] Carol felt very familiar to me. I think all mother-daughter relationships are so complicated and beautiful and weird, and that felt very familiar to me.”

The Light In Darkness

The concept for ‘Single Drunk Female’ isn’t something that would normally be thought of in a comedy series. Although there are many shows that depict alcoholism coexisting with humor (‘Shameless’, ‘BoJack Horseman’, or ‘Catastrophe’ to name a few) the core idea of recovery isn’t something that’s funny.

Some people may be turned off by feeling like the show alleviates the direness of addiction, but I would argue otherwise. “One of the things I learned in AA was not to take myself so seriously. Because when you come in and you’re new, everything is a catastrophe. Everything is a problem. I was a drama queen,” said Finch to Huffpost. “And so, I don’t take everything so seriously, and I make that a funny idea with Samantha or with the other characters.”

Finch still wants to emphasize that it doesn’t take away from the serious nature of recovery, or negate any of the struggles that Sam or other characters like her are enduring. Sobriety saved her life. “This isn’t just a story about quitting alcohol, but about cynical, rules-avoidant, darkly funny Sam quitting alcohol,” writes The Washington Post.

What makes us human and gives us the ability to survive is being able to find joy in the darkness. Specifically, in storytelling, humor makes drama not only more digestible but that much richer. Having lighter moments allows for heavier scenes to really hold their weight. Humor within those scenes makes the show ultimately a more enjoyable experience for an audience. “For me, playing Sam, it’s not all dour and dark, which is not to say that doesn’t exist at all, but Sam is a real person, so therefore, she’s all the things at once,” said Black-D’Elia. “The show may not necessarily be what people might expect it to be, so I hope that the audience gives it a chance. I think they might end up caring about these characters a lot more than they would think they do.”

It also destigmatizes some of the problems that people going through recovery face: Sam’s journey is not linear, and not an easy feat. Her struggle allows her to make mistakes and fail while she still remains redeemable. There is a certain level of care and tenderness that must go into dealing with addiction without sacrificing the character’s humor, growth, or complicated relationships. I found that in the first few episodes available of ‘Single Drunk Female’, Finch and Black-D’Elia, as well as the rest of the cast and crew, have found that sweet spot.