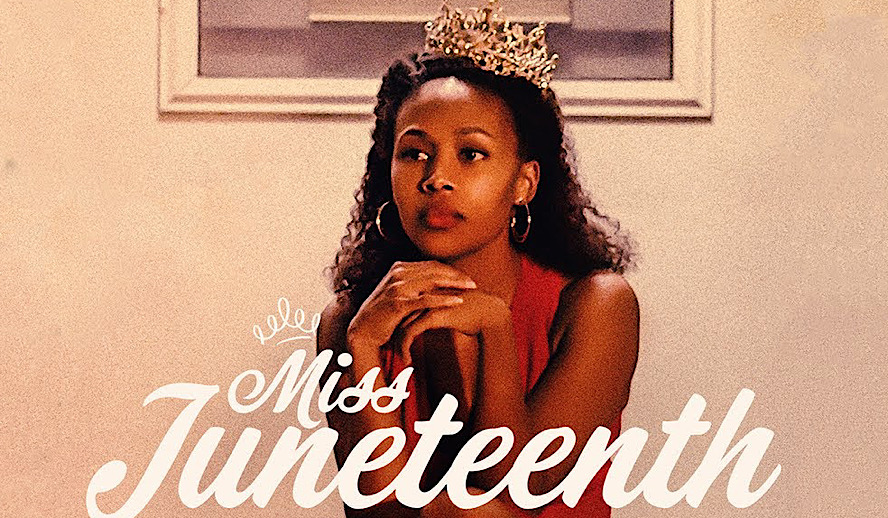 Nicole Beharie proves once again she’s a force to be reckoned with in her most recent film ‘Miss Juneteenth’. Released on the famous holiday last June, writer/ director Channing Godfrey Peoples takes on her biggest project yet with the film on mother-daughterhood.

Beharie (known for 42, Shame, Black Mirror, and Sleepy Hollow) plays the wistful Turquoise, a name fitting for someone constantly dipping her toe in blue sorrows. Set in Fort Worth, Texas, a city swirling with culture and vibrant with an almost ironic southern flare, the boondock both elevates and drowns its townspeople. The film centers around the annual Miss Juneteenth pageant, a contest where young women, through the dignified ceremony, compete for the crown, which includes a full-ride scholarship to the young ladies’ Historically Black College or University (HBCU) of her choosing.

While the story is fictitious, the Juneteenth holiday is a real celebration Black Americans partake in (often instead of the ever-controversial Fourth of July) all over the country. The holiday is an annual celebration of the last slaves to hear of the news of their freedom. The film itself does a wonderful job of highlighting the importance of this holiday, especially for those in Texas, as that’s precisely where those last slaves were– nearly two years after the Emancipation Proclamation.

When we’re introduced to Turquoise, we quickly find out that not only was she a previous winner of the Juneteenth crown, but also that her scholarship, while it was a free-ride for her college experience, it was not a ticket to an easy life. We see Turquoise hustle and work multiple odd jobs a week, from working as a bartender to cleaning toilets, and even being a mortician’s assistant– a fitting job for a woman constantly beautifying the dead and dying things in her life.

Besides the rocky relationship with her mother (Lori Hayes), Turquoise most notably struggles to breathe life into her lofty relationship with her husband Ronnie (Kendrick Sampson). Watching her glue together floating pieces of her relationship, just to see them get shredded back in her face makes for some wonderfully tear-jerking scenes. However, as far as her acting is concerned, Beharie always comes out on top and this film is no exception.

In the fight for the Miss Juneteenth crown, contestants must showcase one of their talents the day of the pageant. Viewers find that when Turquoise won in 2004 it was with a recitement of Dr. Maya Angelou’s poem “Phenomenal Woman”.

In Turquoise’s fight to give her daughter Kai (Alexis Chikaeze) a better life, she tries to force Kai into her own footsteps, working tirelessly so that she could have a life her mother never had. Turquoise insists that Kai recite the same poem she won with, instead of showcasing Kai’s passion and talent for dance. Kai admires that her mother went to an HBCU as Kai is obsessed with dance teams and frequently practices numbers in her room.

Turquoise hardly listens to what Kai actually wants in the film. When it comes time to pick a dress for the pageant, audience members never find out if Kai actually likes the dress or not; Turquoise makes the decisions for Kai in the film. As Turquoise lives vicariously through her daughter, viewers find a sense of irony as the words of Angelous’s poem are forced out of an unwilling daughters throat:

And the flash of my teeth,

The swing in my waist,

And the joy in my feet.

The poem nearly begs the reader to embrace what makes them spectacular and find the joy in their own bodies, and Turquoise refuses to listen to the very words that secured her the crown.

What is Poverty Really?

As Turquoise saves an extraordinary amount of money from her bartending tips for her daughter’s dress, a dress she doesn’t even want, audience members eventually have to come to terms with the fact that Turquoise is hustling for something far deeper than money.

Yes, she has to pay her bills, but the film asks a bigger question about what our characters lack besides money. Is it a lack of spirit? Is it a lack of health or joy? Is it pride?

In the parallels between Turquoise, her daughter, and the reverberating words of Maya Angelou, the film becomes an epic on the strength of Black women. This theme of course is only as powerful as the actresses behind it. Beharie and Chikaeze make a dynamic duo. In them, I see the fortitude of my own family members, of the Black women I know in my real life, of my heroes, like Stacey Abrams and Ava Duvernay. As you find the ones you love in these characters, know that that is a testament to People’s dedication to truthful storytelling.

It’s incredibly fitting to center the themes of this story around the Juneteenth holiday. A day celebrating the freedom of those who were already free; by the end of the film, Turquoise and Kai both find their freedom, the freedom they had acquired far before they realized they had it. Even though slavery ended over 150 years ago, sometimes we find ourselves bound to generational curses still lingering from ghosts of slaves-past.

In Beharie’s performance, we always see a glimmer of something close to changing, of a cycle being broken for better or for worse. The Juilliard grad’s transformation into Turquoise is a sight for sore eyes as viewers continue to dig for complex depictions of Black women on screen. Now more than ever it’s vital for America to ground itself with positive figures of representation and Nicole Beharie proves more and more that she’s worthy to be crowned. As we inch closer and closer to awards season, don’t count out this phenomenal woman, or the brilliance that is Miss Juneteenth for an Oscar or two.