The Meme-ification of ‘King of the Hill’ 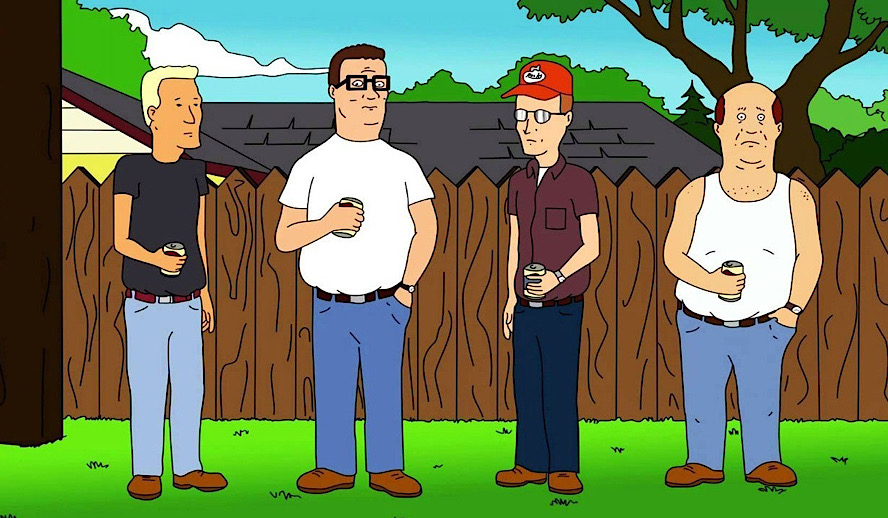 Photo: ‘King of the Hill’

‘King of the Hill’, created by Mike Judge and Greg Daniels, came out in 1997 on FOX. The animated adult sitcom follows a family, the Hills, in Arlen, Texas. The Hills include Hank (Mike Judge), the father who proudly sells “propane and propane accessories”, Peggy (Kathy Najimy), the mother who is a substitute teacher for Spanish classes, and Bobby (Pamela Adlon), the twelve-year-old son. While the series may have premiered over twenty years ago, it has recently found another life online, similar to other shows from the era, like ‘the Sopranos’. In recent years, ‘King of the Hill’ has been subject to numerous memes and internet jokes, from this mashup with ‘Neon Genesis Evangelion’ to the countless memes of Hank Hill listening to music to whatever this all is. With all these memes, one must wonder what it is about ‘King of the Hill’ that Millennials and Gen Z love so much.

The All Mighty Bobby Hill

Bobby Hill has always been a stand-out character in ‘King of the Hill’ and this still remains true today with countless Youtube videos labeling Bobby as a “spirit animal” to various Bobby Hill merchandise. Bobby’s stardom doesn’t come as a surprise to anyone who has seen an episode of ‘King of the Hill’ since Bobby is indeed a star.

Bobby is perhaps one of the funniest characters in ‘King of the Hill’, being a loveable class clown who is comfortable in his own skin. Bobby’s comfort and unconventional personality made him a fan favorite, with episodes that revolved around him winning Emmys. In one Emmy winning episode, “Bobby Goes Nuts”, Bobby accidentally takes a self-defense class for women and learns the power of kicking men between the legs. Before kicking men in the groin, Bobby screams what he learned in class: “that’s my purse, I don’t know you”. Years later, “that’s my purse, I don’t know you” has become a meme on the internet, with the line becoming a Tik Tok trend where people would scream the line to show self-confidence. It makes perfect sense that Bobby, a character who is comfortable in his own skin, would be the subject of a meme about self-confidence. Years later, Bobby’s ideas of self-love and not taking yourself too seriously are still relevant today.

With Bobby being written as a stand-in for the younger generation, often being used to make commentary on the latest trends as well as the typical problems of being young, he is still relatable to the kids of today. While the trends have changed (I mean, grinding and twerking are the same thing but still), the relatability of Bobby is still very present. From scenes of Bobby getting crushed by his first love to crying while putting on lipstick, Bobby has become such a meme because he is seen as relatable. Overall, Bobby Hill is both the character that people want to be thanks to his self-confidence and a character that people relate to thanks to him being a stand-in for the youth.

Hank Hill is the main character of “King of the Hill’, the titular King of the Hill. Hank is proud, well-meaning, and fair. He is the leader in his group of friends and often acts as the most logical person in Arlen. Hank is no-nonsense and is easily uncomfortable in many social situations. Hank is overall the opposite of Bobby, with Bobby being a self-confident goof and Hank being a more reserved realist. With Hank being so reserved, he is the perfect target for memes and jokes. Messing with Hank Hill is almost like messing with your own father, with his discomfort and annoyance creating a lot of enjoyment, similar to pranking your own father. This is why people get so much enjoyment out of watching compilations of Hank getting angry. It has the same feeling of laughing at your father when he’s annoyed at something. Overall, Hank Hill is the subject of so many memes because his character’s easily annoyed personality makes him an easy target for mockery and good laughs.

‘King of the Hill’ – Memorable Characters And Relevancy

Like ‘the Simpsons’, ‘King of the Hill’ is full of various side characters, from conspiracy theorist Dale Gribble (Johnny Hardwick) to the good-hearted Lucky (Tom Petty, yes, Tom Petty). Many of these characters have garnered memes of their own, from Dale’s “pocket sand” to Boomhauer (Mike Judge) talking for one hour. There are even Tik Toks of people pronouncing names as different ‘King of the Hill’ characters.

With the large number of side characters in the series, it makes sense that some of them would also spawn memes of their own. This is not a quantity over quality situation though, since the characters themselves are extremely memorable. If the characters weren’t so memorable, they wouldn’t still be referenced to this day. Part of why these characters are still remembered and memed are because of how well they aged. One of the characters that has aged the best for all the wrong reasons is Dale Gribble. Dale Gribble, being a redneck conspiracy theorist who’s all talk, is the perfect embodiment of the modern Qanon Trump supporter. Due to this comparison that is often made, memes revolving around Dale Gribble are often made to poke fun at real people who act like him.

‘King of the Hill’ is available to stream on Hulu.