The Immortal Magic of ‘Hocus Pocus’: Looking Back at Classic Ahead of Cast Reunion 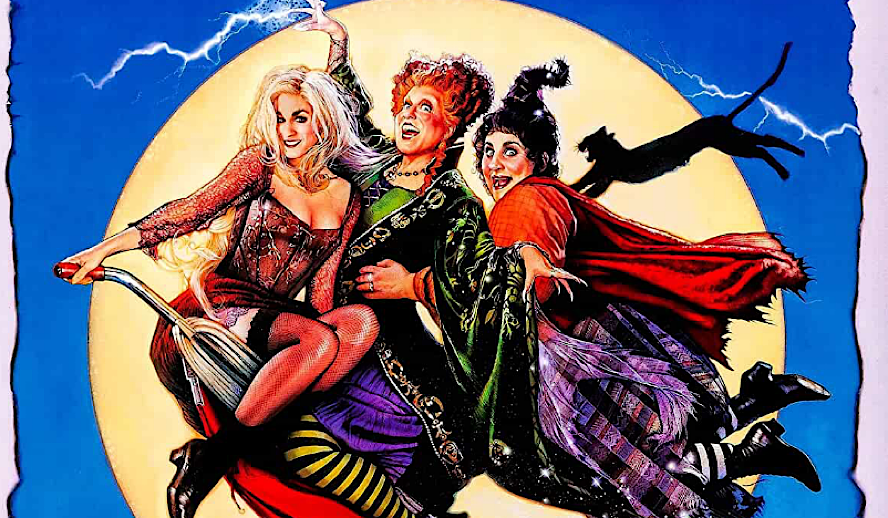 In these uncertain times, one inevitability remains, everyone will be watching ‘Hocus Pocus’ this October. Over the 27 years since its release, Hocus Pocus has effectively cemented itself as a cult classic as well as a film central to the celebration of the Halloween season. The topic of this film’s legacy has been brought to light as Bette Midler announced a cast reunion at her “Hulaween Gala” on October 30th of this year! After decades of consistently enjoying the pure spooky goodness of the film, it can be easy to forget just how impressive Hocus Pocus sustained success is. Originally set to be a Disney Channel Original Movie, producers took a huge risk developing this witch flick, and it almost did not pay off. Curiously released in the middle of July of the year 1993, the moviegoers of the early 90s were understandably turned-off by the mid-Summer release of the Halloween film. Hocus Pocus opened to mediocre reviews and a meek 8 million in the box office, seemingly setting up the film for a lackluster, and rather unremarkable, legacy.

What would today’s Halloween season even be without Hocus Pocus? In addition to being the faithful backbone of Freeform’s annual “31 Nights of Halloween”, Hocus Pocus has set the framework for the family-friendly Halloween genre, and a reality in which the film never transformed pop culture can only be imagined as bleak. Luckily the tide has shifted and over time, the movie once written off as a flop has ascended to become one of the most beloved films of all time. While it may appear as though this twist of film fate can only be a result of magic, there is plenty of irrefutable evidence as to why Hocus Pocus has stood the test of time.

The story of the Sanderson Sisters is an epic that requires extraordinary talent to tell. These three sisters have become trademarks of the Halloween season and for good reason! With the perfect blend of terror, hilarity, and downright insanity, the Sanderson Sisters, and the stellar women who brought them to life, deserve a wealth of credit for the film’s long-lasting success. The most blatantly brilliant feature of Hocus Pocus that demands praise is the casting of the antagonistic trio. Although Bette Midler, Kathy Najimy, and Sarah Jessica Parker were perhaps not the hottest names in children’s entertainment, it was an ingenious decision to choose three masters of their craft to center this film around.

First and foremost, Bette Midler’s performance as Winifred Sanderson remains one of the most iconic film performances to date as it artfully blends the line of horror and whimsy. As one of the most compelling villains, Midler’s Winifred stands out as a haunting foe to the young protagonists as she vows to “suck the lives out of the children of Salem before sunrise.” Whether she is threatening to steal children’s youth or raising the dead, Winifred’s petrifying character gives Hocus Pocus an edge that makes the film enjoyable for audiences of all ages during the Halloween season.

On top of mastering the sinister elements of Winifred, Midler also excelled in conveying the over-the-top melodramatic side of the character’s personality that is crucial to maintaining Hocus Pocus’s spirited tone. From her unforgettable book-summoning yodel to her witty quips aimed at the self-esteem of her sisters, Midler’s overwhelming theatricality completes Winifred as a thrillingly entertaining character on top of a chilling villain. Scary, dramatic, and powerful, Winifred Sanderson is one of the all-time great movie villains and her bone-chilling thirst for the youth of Salem’s children is the driving force behind the film’s success.

Although Midler’s performance as Winifred is undeniably iconic, it would be completely irresponsible to ignore the spectacular support that stars Kathy Najimy and Sarah Jessica Parker supply as the other two Sanderson Sisters. Where Winifred thrives as the leader and primary threat, Najimy and Parker provide the essential levity that distinguishes Hocus Pocus from typical Halloween flicks. As an established comedic powerhouse, Kathy Najimy effectively turned her character, Mary Sanderson, into a consistent scene-stealer. Just as Midler’s terrifying performance elevated the children’s movie to a much more palatable film for audiences of any age, Najimy’s high-brow comedy does just the same. With each viewing of Hocus Pocus, Mary’s character only grows stronger; the more you focus on this sister, the more you discover all of the nuanced physical humor and clever one-liners Najimy effortlessly packs in.

Following Mary is Sarah Jessica Parker’s mesmerizing performance as Sarah, the provocative and severely demented youngest sister, to fill out the group. She may be the easiest to overlook, but that is no reflection of what Sarah brings to the table. The femme-fatale of the squad, Sarah is as disturbing as she is hilarious. From flirting with bus drivers and eating spiders to brainwashing all of the children of Salem with her traumatizingly eerie lament, Sarah is the bridge between the evil of Winifred and the comedy of Mary that completes out the superb Sanderson trifecta.

The cast is responsible for a great deal of Hocus Pocus’s enduring success; however, the film’s fantastic utilization of camp cannot be overstated. Camp is a general and ambiguous term that essentially defines anything that evokes the absurd and the exaggerated; Hocus Pocus is infused with camp and it is exactly what curates the perfectly balanced “spooky” aesthetic. A film that opens with a young girl dying and three witches getting hanged, Hocus Pocus contains a surprisingly substantial amount of dark and distressing content that requires a wealth of outrageous, wacky fun to maintain its magical and fantastical tone. The perfect combination of frightening and fun is at the core of what makes Hocus Pocus a timeless Halloween classic and it is during the film’s disconcerting and over-the-top moments when camp is called upon most effectively.

The campiness of Hocus Pocus is evident from the subtle details of the characters’ wardrobe to the blatantly exaggerated and showy special effects. The inclusion of an immortal talking cat and an altruistic zombie both exemplify how Hocus Pocus expertly leaned into a campy aesthetic in order to create its bizarre yet wondrous world. Some of the greatest moments of the film are products of overdone theatricality, specifically the musical numbers. The Sanderson Sisters’ performance of “I Put A Spell On You” is the epitome of what makes Hocus Pocus a Halloween classic.

It is a sinister scene as the witches are fooling all of the town’s adults, placing a spell on them that renders all of their children vulnerable to the witches’ thirst for youth; however, it is also the most fun and exciting sequence of the film! With Bette Midler’s mesmerizing performance, lively choreography, and theatrical use of smoke and lighting, all of which take place in a venue full of extravagantly costumed adults, this moment of Hocus Pocus culminates in a campy spectacle of gargantuan triumph. This number encompasses the appeal and decisive success of Hocus Pocus as it defines the spooky aesthetic all Halloween movies strive to recreate as well as delivering on the promise of all great films- a magical experience that lasts a lifetime.