Jim Gaffigan Is A Delight In New Special ‘Comedy Monster’ 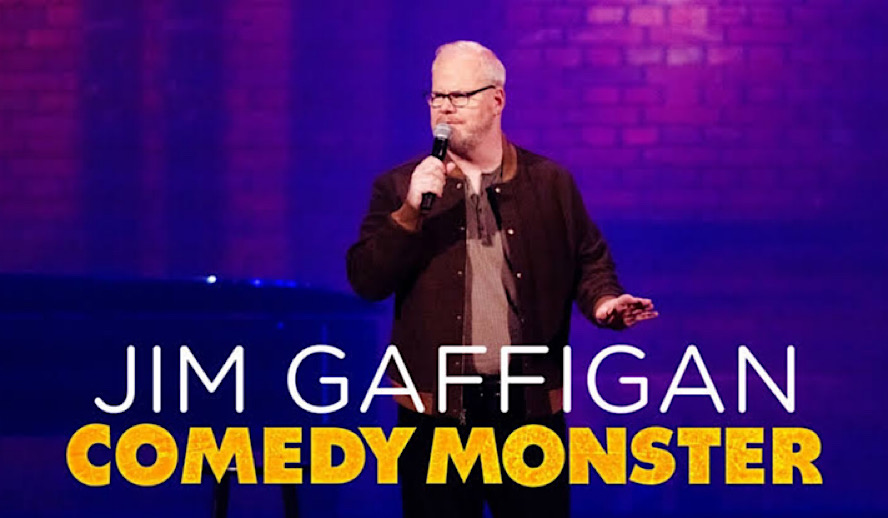 Stand-up comedian Jim Gaffigan has returned to Netflix with his sixth stand-up special made with the streaming giant. In his newest special ‘Comedy Monster’, Jim Gaffigan trades the New York brick wall comedy club background for a large theatre in Minneapolis. Gaffigan is often associated with his family brand of comedy, being a family man and a “clean comic”. While this brand may be a turnoff for comedy fans who are seeking something edgier, Gaffigan proves that one can still be hilarious and edgy without f-bombs. ‘Comedy Monster’ tackles everything from the current state of the world to how ridiculous he feels while wearing sunblock. ‘Comedy Monster’ is a must-watch for any fan of stand-up comedy, offering lots of laughs and even some relief during these stressful times.

Gaffigan has always been associated with “clean comedy” since he rarely curses on stage and is open about his religious beliefs. This persona that many have identified him with is put up to the challenge in ‘Comedy Monster’. This isn’t to say that Gaffigan starts to curse like a sailor or anything, but he does show some edge in this special, especially when discussing some current social trends. A lot of these moments of edge come with longer stories, being used as either segways or afterthoughts. In one bit, Gaffigan discusses his vacation in Hawaii where he is told by locals that Americans stole their land. To this, Gaffigan points out, “Don’t know how to break it to you, but we stole all the land.” This joke works so well because it plays with expectations by having Gaffigan actually agree with the locals and acts as commentary to America’s tradition of colonialism.

One of the best bits in the stand-up special is Gaffigan’s commentary on Covid, specifically how people treat it. He opens his special by saying, “Remember when we thought the pandemic was over?”, while performing in a crowded theatre. While this fact is funny in and of itself, the joke also works because it points out a universal truth that we are all going through. From here, Gaffigan points out all the social issues that came with Covid, from people patting themselves on the back for listening to the rules, to all the weird conspiracy theories that involve Tom Hanks and eating babies.

These jokes work best because they combine a political edge with Gaffigan’s “everyman” appeal. There is nothing more currently universal than Covid, it is sadly a topic that everyone can relate to. Gaffigan poking fun at this may seem obvious since every comedian has a Covid set now, but Gaffigan puts an edgy spin to it by pointing out people’s ignorance on the topic. Gaffigan also puts an everyman spin on the set by focussing more on observational humor, commenting on all the different reactions that Covid has garnered.

Gaffigan is often known as an “everyman” with a lot of his humor revolving around the mundane and pointing out the ridiculousness of things we often overlook (it also helps that he has the appearance of an “everyman” which he often riffs on). He is a true observational comic who can go on for hours riffing on the simplest things, from parenthood to Hot Pocket commercials. Gaffigan is also known for his self-deprecation, taking aim at his appearance and laziness. Fans of Gaffigan’s signature observational and self-deprecating style will be quite pleased with ‘Comedy Monster’ since this brand of humor is center stage.

Some of the best bits in ‘Comedy Monster’ are about the little things in life. In one particular bit, Gaffigan makes fun of parades. He starts out with his Covid material and then points out that this means that they had to cancel parades which upsets no one. He then goes on to talk about the absurdity of parades, how they are just crowds of people watching other people walk down the street. This bit works so well because it accurately points out what a parade is and how weird they are in hindsight. Gaffigan sheds a light on something that we are so familiar with that we don’t further question it.

For fans of observational storytelling, there are plenty of fun family stories that Gaffigan tells. In one particularly good bit, Gaffigan talks about how his romantic trip to Hawaii with his wife soon turned sour once his wife wanted all the kids to come along. “I only agreed to it because a trip to Hawaii is much cheaper than a divorce”, he quips. While this bit may seem like another “take my wife” stereotype, Gaffigan’s jokes are always more sincere, coming from a place of love and stress (with five kids who wouldn’t be stressed).

Gaffigan’s strengths lie in his ability to poke fun at himself. From his famous bits where he makes fun of his own sets in the third person (“did this guy really make a poop joke?”) to his bits about his laziness. Gaffigan’s self-deprecation leads to one of the funniest bits of the night in ‘Comedy Monster’. There is a bit of an online trend that occurred where people compare Jim Gaffigan to things, from saying that he looks like a pair of knees to various baby photos. Gaffigan pokes fun at this in his special, commenting on how weird it feels when complete strangers keep comparing you to body parts and various babies. This bit works so well because Gaffigan is contributing to the meme. He is using his self-deprecation skills to include himself in the joke. This bit also works so well because it is commenting on the absurdity of internet culture, where we are comfortable comparing people to objects publicly.

Jim Gaffigan’s latest stand-up special is a must-watch for fans of comedy and for anyone looking for a good laugh. From stories about parenthood to bits about motorcycle riders, there is something in ‘Comedy Monster’ that’ll make everybody laugh. For quite some time, many judged Gaffigan for being a “clean comic” before they even heard his set, lumping him together with other “clean comics”. This is a misconception though, since Gaffigan is so much more, offering plenty of insight and good nature laughs throughout his comedy career. ‘Comedy Monster’ is just another reminder of Gaffigan’s immense talent and wittiness.

‘Jim Gaffigan: Comedy Monster’ is available to stream on Netflix.