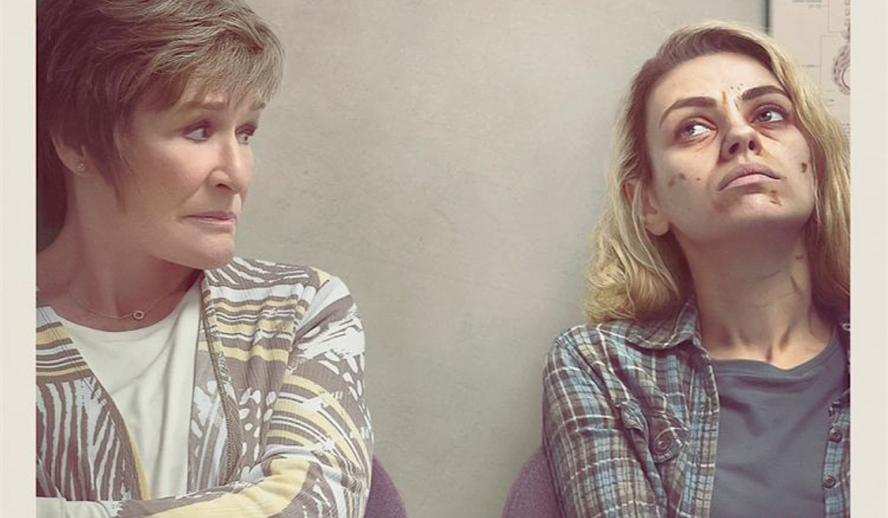 ‘Four Good Days’ tells the true story of Amanda Wendler portrayed by Mila Kunis and her mother, Libby Alexander, played by Glenn Close. The pair wage war against Amanda’s addiction to heroin and opioids, which she’s quit and relapsed 14 times previously. As hinted through the title of the film, the narrative focuses on Mila Kunis’s portrayal of “Molly” going through a four-day long period of withdrawals in the hopes of getting a treatment that would absolve her of her addiction.

The story that ensues is one of tragedy, highlighting the effects of illicit substances on a person and the one love that is truly unconditional, that of a mother. The heart and soul of the film is the relationship between Close and Kunis, a troubled daughter and a mother unwilling to give up on her child. Sadly, the film never finds stable footing and suffers mightily because of some shotty script writing.

Glenn Close takes on a role that she is extremely familiar with having starred in Ron Howard’s ‘Hillbilly Elegy,’ 2014’s ‘Low Down’ directed by Jeff Preiss, and ‘Cookie’s Fortune,’ from Robert Altman in 1999. All these films are similar in the sense that Close plays a maternal nurturer with some of that signature Glenn Close flare. She definitely plays a maternal nurturer in ‘Four Good Days’ and really excels, bouncing off the stripped-down Mila Kunis to build some really intriguing chemistry between the two. Kunis, who plays a toothless drug addict, treks into uncharted territory with respect to her range of portrayals, until now.

Most famous for her air-headed, pretty-girl role as Jackie in ‘That 70’s Show’ Mila does a complete 180 here, taking on a far more humble character. She perfectly captures the essence of a lost soul, bringing a sense of empathy to some rather taboo subject matter. Both leads in ‘Four Good Days’ do extremely well, breathing life into an otherwise middling affair.

One thing I also really enjoyed with this film was the strength of the idea behind the overall narrative. Drug addiction affects 21 million people and less than 10% of those afflicted ever get treatment for their vice. For drug abuse, any representation is a good representation, as long as it sheds light on the issue at large. ‘Four Good Days’ unapologetically looks into the void that is drug abuse and finds light in the material. This relationship shines brightly, demonstrating the unending and unquenchable love a mother feels for her young, regardless of what atrocities they commit against her. Your mother will always be there for you, and it was really touching to see that relationship explored through the lens of a person who needs it the most.

There are some very head-scratching moments in ‘Four Good Days,’ never a good sign when dealing with a reality-based drama. Every choice should be reasoned, understandable, and in service of the greater narrative. That definitely is not true for this film. Characters spout exposition through thinly veiled “conversation” and make choices that no reasonable human being would ever make. The script, as a whole, meanders, relying far too heavily on the skill of its leads, never really bringing anything new to the table.

Films like ‘Beautiful Boy’ starring Timothée Chalamet and ‘Requiem for a Dream’ featuring a young Jared Leto tackle similar subject matter in a much more novel way with far better execution. Too many times I felt as though the moments in ‘Four Good Days’ latter half fell into some melodrama cliches, almost coming off as insincere. The story itself, although true, is very derivative. It’s a story of a young woman’s struggle and the guidance and care she receives from her mother in her time of greatest need. That’s really all. It’s relatable, sweet, endearing, and tragic, but it’s a story that’s been written many times before.

The final issue I took with this film comes again from the script, but this time from its usage of side characters. There is not a single character in this film that has any semblance of an arc besides Mila Kunis or Glenn Close. Mila’s ex-boyfriend and father to her children shows up halfway through and seems like a good enough guy, he only appears on screen once, but he’s mentioned multiple times.

After his one and only scene, it’s revealed that he is an enabler and a user who attempts to exploit Kunis to score drugs, a totally random and unsubstantiated aspect to the overall script. Kunis’s sister appears once in the film, she says nothing important at all. Her only purpose is to act as a way to build further dramatic tension between Kunis and Close, leaving her character more or less high and dry. This overt mishandling of, quite literally, every non-lead character in this film is appalling and one of the worst examples of scriptwriting I have ever seen from an Oscar-nominated film.

Director and Writer Rodrigo Garcia tapped Eli Saslow’s article published to the Washington Post titled, “How’s Amanda?” for a screen iteration remake. The article was based on the true story of Amanda Wendler, the former straight-A student turned heroin addict. The film adaptation is mostly faithful to its source material, albeit a bit dramatized. The Eli Saslow article chronicles the horrors of heroin and opioids and the ravaging effects they had on Amanda Wendler, but also on society as a whole.

Saslow gives some jaw-dropping statistics for context, stating, “Another 350 people starting on heroin every day,… another 4,105 emergency-room visits; another 79 people dead. Drug overdoses are now the leading cause of injury-related death in the United States — worse than guns, car crashes or suicides.” These small tidbits and real portrayal of Amanda go a long way to making the literary version of ‘Four Good Days’ more compelling than its cinematic contemporary.

‘Four Good Days’ is a serviceable family melodrama exploring the “good” days through a compassionate and impactful window. The film jockeys with the ideas of tough love, addiction, and relationships, never quite finding its mark, but putting together some touching moments, nonetheless. Certainly worth a watch, if even just for the powerful performances of Mila Kunis and Glenn Close, but I believe most will be able to find some level of connection to the source material, as well. ‘Four Good Days’ is currently in theaters and will be coming to streaming May 14th, 2021.