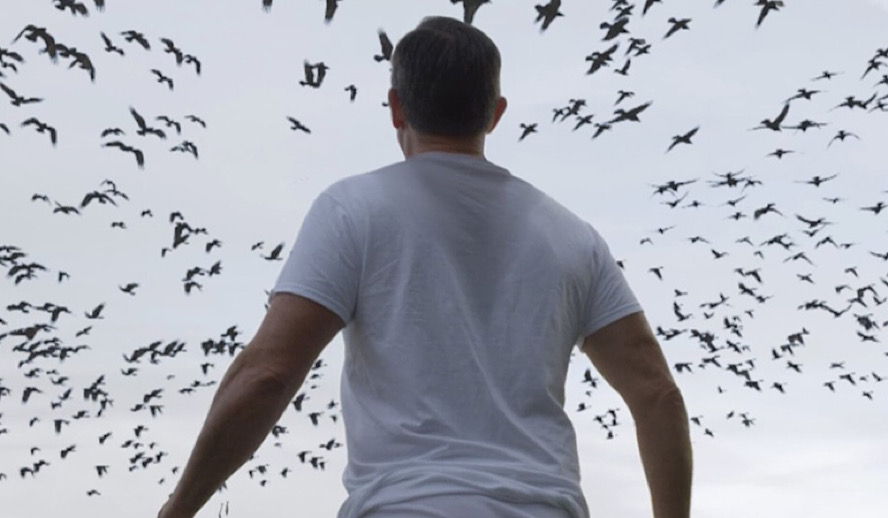 Two girls- a pair of shock-blonde sisters- sit on their porch steps by night. “I’m sick of waking up and feeling like this,” one numbly admits, while the other puffs on a cigarette that has almost reached its end. These are the daughters of the Simon family, the victims of Stephen and Alexa Kinigopoulos’ feature film Fishbowl, a quietly harsh story of an overly-religious father who prepares his family for the imminent Rapture. Rick Simon and his three daughters, Jessa, Rachel, and Belle live in the unassuming Bishop County at the turn of the 21st century, after their mother walked out. Each daughter handles this differently, either acting out or withdrawing completely, but their father descends into a spiral of telemarketing religion.

After ordering an obvious pyramid scheme with a “Get to Heaven quick!” design, Rick tightens the reins on his daughters who are slowly slipping through his fingertips in traditional teenage rebellion. Going to a party, liking a boy… Their rebellion may look tamer than most but their father lashes out all the same, and the girls find themselves trapped in a fishbowl. A town, where if something happens, someone saw it and someone else talked about it. A family tearing at the seams. A mother, who left without them. A fishbowl- inescapable.

A Dose Of Reality

There is a dream-like quality to this film that keeps the viewer at rapt attention from the first whispers of dialogue to the last fortifying seconds. Filmed in the very town the Kinigopoulos siblings were raised in, Ellicott City, the fictional Bishop County holds that small-town truth that is often glamorized in Hollywood by people who have never spent much time in such a suffocating space. There is no charm as we walk through the halls of the Catholic all-girls school the Simon sisters attend or the minuscule chapel that holds a congregation of fifty or so people. This emptied feeling adds an echo to the sisters’ loneliness, one that reverberates around the viewer and creates a deep note of sympathy for these girls who are simply trying to live.

If you are a fan of Sofia Coppola’s indie masterpieces, especially The Virgin Suicides, you will greatly enjoy Fishbowl. They are both films that dive into the very real questions of religion- Why do we believe? Is it not enough to be a good person?- and they end with such a strong note of sincerity. This style of storytelling is often critiqued for the lack of action, of motivation, but naysayers don’t understand the value in understanding a teenaged girl without the nuance and fluff. At their core, they have secrets and mysteries, ones that do not ask to be discovered but instead treated with respect that they are private for good reason. Movies like Fishbowl speak to women everywhere, with quiet whispers of I understand. I see you.

‘Fishbowl’ – The Cast Of Real Characters

The cast, while small, had genuinely solid moments. The sisters, played by Caroline Coleman, Emily Peachey, and Belle Shickle, create a world that lives beyond this script. Their bond needs no explaining, it is evident in the way they protect and follow one another without question, and it allows for their world to carry on in the viewer’s mind well after the film is over. Caroline Coleman, playing the docile sister Jessa who has gone mute in her mother’s absence, is a particularly bright standout in this trio. Although she has little to no lines throughout the movie, her doe-eyed expressions and sympathetic reactions shine through the darkest moments in this script.

Although she is gone from the Simon family, their mother Macy, played by Judith Hoag, makes brief appearances through vivid flashbacks that show both the relationship with her daughters and an ever-growing strain separating her from a once-alcoholic husband. Hoag adds a much-needed breath of fresh air in the more harrowing moments, and she captures a playful essence within the girls that only further contributes to the world beyond the movie screen.

The Bigger Question of Religion

A quote from director Alexa Kinigopoulos, “it’s good to question, especially for kids. It’s good to question what they’re told, and it’s good for them to understand why, and not just, ‘This is the way.’” This film tackles faith and religion with depth and grace, a real understanding of what it means to grow up when a belief is strongly forced upon you. Questioning your faith is seen as dirty, shameful, and must never be spoken aloud, or you are committing one of the greatest sins. However, Rick falls into an almost cult-like obsession with a man promising the impending rapture and makes him the mockery of a true Christian man, one who would never be swayed by the words of another human. In their father’s bastardization, it is wholly understandable that the daughters doubt that the Rapture is real and the Church is something to be idolized. The Kinigopoulos siblings raised Jewish and Greek Orthodox clearly sought to give freedom where it is normally denied in traditional family settings. For Fishbowl, faith is not about church, or the Holy Spirit, but instead in your family and the things you hold dearest.

Fishbowl Is A Grief-Stricken Ode to Film

Fishbowl is deeply tragic in a fascinating cinematic experience. It does not rely on shock factor, outlandish editing, or fantasy sequences, but instead the very real path some take when dealing with personal grief. While Fishbowl cannot decide what type of film it wants to be at certain points, ranging from a coming of age teen flick to a thriller, the movie certainly understands its characters and gives them room to grow. If you are in the mood for a real heart-wrenching flick with some strong messages of growing up and out, Fishbowl is certainly the perfect film for that. Highly recommended to watch bundled underneath some blankets on a chilly night for the ultimate experience of love and loss, you will be mulling over Fishbowl’s themes and messages long after the movie has finished.